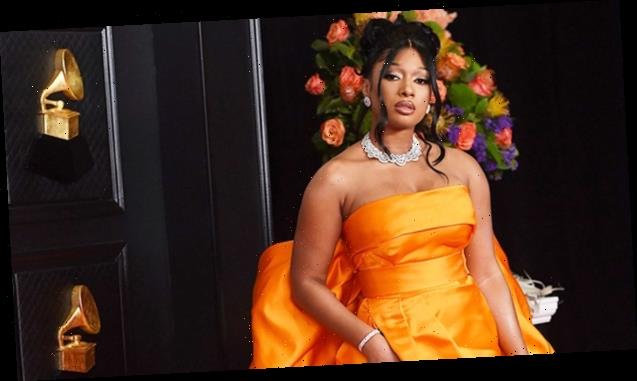 Megan Thee Stallion made her first Grammys appearance count! She was one of the red carpet’s best dressed in a stunning orange gown with a giant bow on the back.

Bow down! Megan Thee Stallion looked like absolute music royalty as the rapper arrived at the 63 annual Grammy Awards in Los Angeles She wore a bright orange strapless Dolce and Gabbana gown with a sexy hip-high slit on the left side. The dress featured a massive dramatic bow covering her entire backside, and Meg accented her look with tons of bling. The 26-year wore an elegant diamond necklace, with diamond bracelets on each of her wrists. Meg wore her hair in a gorgeous updo with tendrils framing her face, as to allow her gown and jewelry to be totally showcased. Meg told E! that  she really wanted to “pop” on red carpet and ” “I wanted to look like a Grammy. I manifested this.” 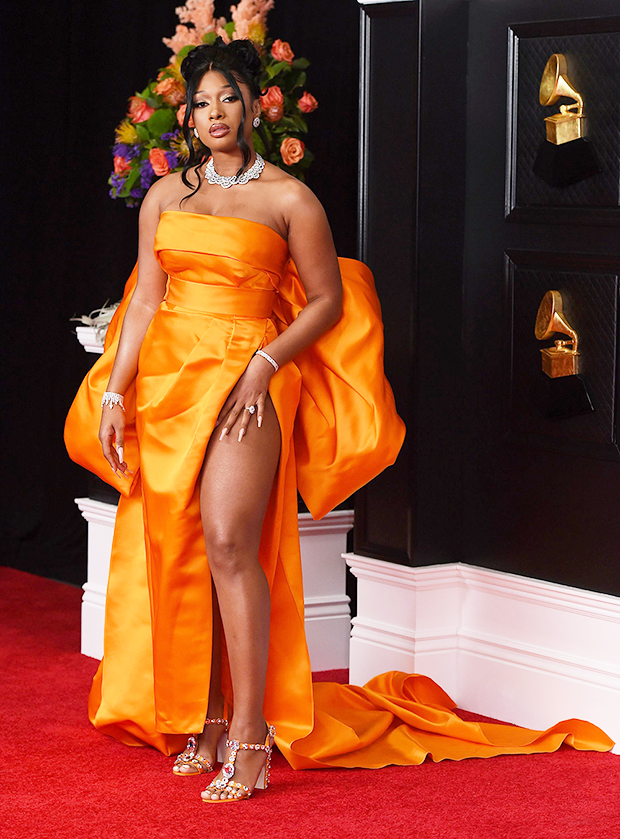 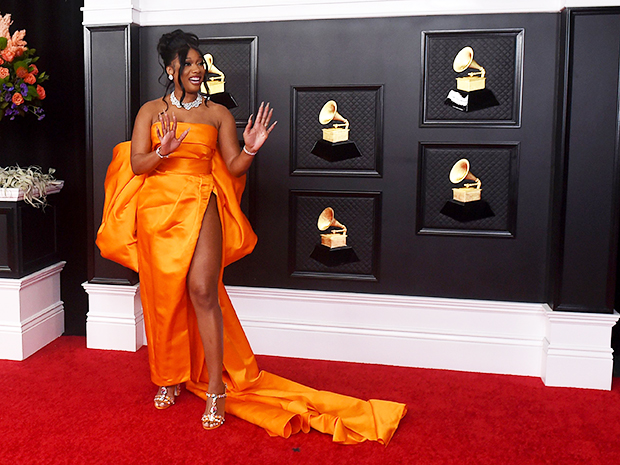 As for her performance later in the night, Meg promised in a tweet that it will be “Real hotgirl sh*t!” She hinted that she’ll be joined onstage Cardi B to perform their number one smash duet ‘WAP.” In a tweet to Cardi earlier in the day, she told the 28-year-old, “I can’t wait for everyone to see us kill it tonight.”

Meg already took home her first Grammy ever when it was announced pre-telecast that she and Beyonce and won Best Rap Performance for Megan’s “Savage” remix. She celebrated via an excited tweet that simply read, “AHHHHHHHJHGJDKNBOOM” with a series of crying emojis. In the remote video of her reaction, she squealed for joy and yelled “Whaaaaat? Me?” while looking gorgeous in a strappy black top with the elegant updo she rocked on the red carpet.

Megan — full name Megan Pete — is up for one of the most coveted awards of the night: Record of the Year for her remix of “Savage.” This time last year the song was on the verge of exploding thanks to the viral video dance challenge that went along with the lyrics. As everyone including celebrities were forced into home quarantines due to the March 2020 COVID-19 outbreak, folks had a lot of time on their hands to show off how they could be the most “Classy, bougie, ratchet” to the song via their Instagram and TikTok videos. Even Justin Bieber and Hailey Baldwin gave it their best shot while under lockdown!

Thanks to her monster breakout 2020, Megan is also up for the always competitive Grammy category of Best New Artist. After “Savage” became one of the biggest hits of the year, she teamed up with Cardi in August for another one of 2020’s biggest smashes with their raunchy duet “WAP.” Meg then released her first studio album Good News on November 20, 2020, along with the first single “Body.”

Megan is one of 22 artists performing at the 2021 Grammys from locations across Los Angeles, the U.S. and the world, with the main awards show action going down at the Los Angeles Convention Center. The Daily Show‘s Trevor Noah has the hosting duties.

What Meghan Markle Is Demanding Of Buckingham Palace