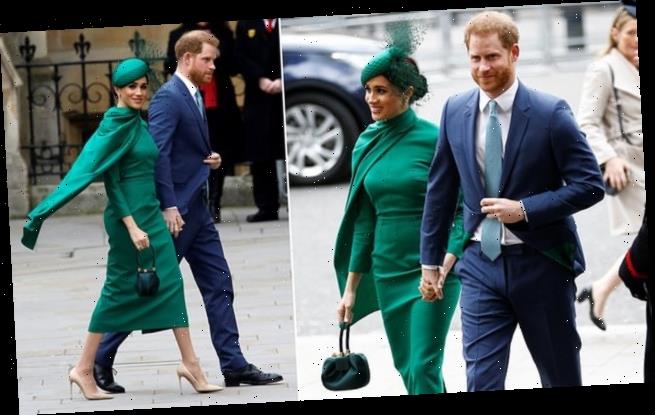 Meghan Markle is breathtaking in a caped emerald green dress

The jewel in the crown! Meghan Markle is breathtaking in a caped emerald green dress by Emilia Wickstead and matching hat as she arrives at Westminster Abbey

The Duchess of Sussex looked resplendent in an emerald green ensemble as she arrived for the Commonwealth Day service at Westminster Abbey this afternoon.

Meghan Markle, 38, chose an exquisite caped dress by designer Emilia Wickstead with a matching hat by William Chambers as she joined husband Prince Harry, 35, and senior royals including the Duke and Duchess of Cambridge for the engagement.

It marks Harry and Meghan’s last official outing as senior members of the royal family before they give up their titles at the end of the month as part of their ‘Megxit’ departure deal.

And the Duchess of Sussex rose to the occasion with her showstopping ensemble, which was widely praised on social media by royal supporters and fashion fans alike within minutes of her arrival.

Crown jewel: The Duchess of Sussex made a statement in an emerald green ensemble as she arrived for the Commonwealth Day Service at Westminster Abbey this afternoon 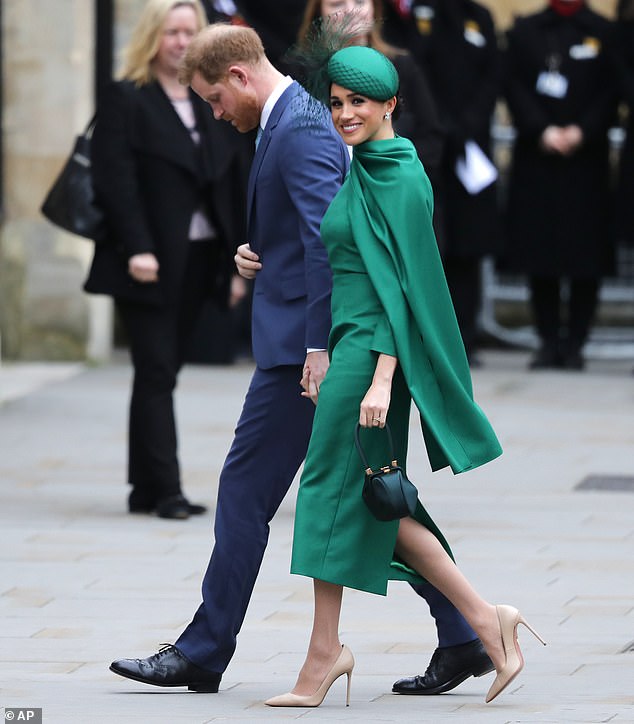 The elegant, long-sleeved dress is thought to be a bespoke creation by Wickstead, a favourite of both Meghan and the Duchess of Cambridge, 38.

The fitted long-sleeved dress falls a few inches below the knee and features cleverly-placed darts on the torso and waistline that serve to flatter the Duchess’s svelte frame.

A dramatically draped asymmetric cape that falls over the right shoulder adds a fashion-forward twist to the otherwise classic cut.

Continuing a recent streak of monochrome looks, Meghan wore a matching green hat with net detailing on the brim and folded in an oversized flower structure on the side. 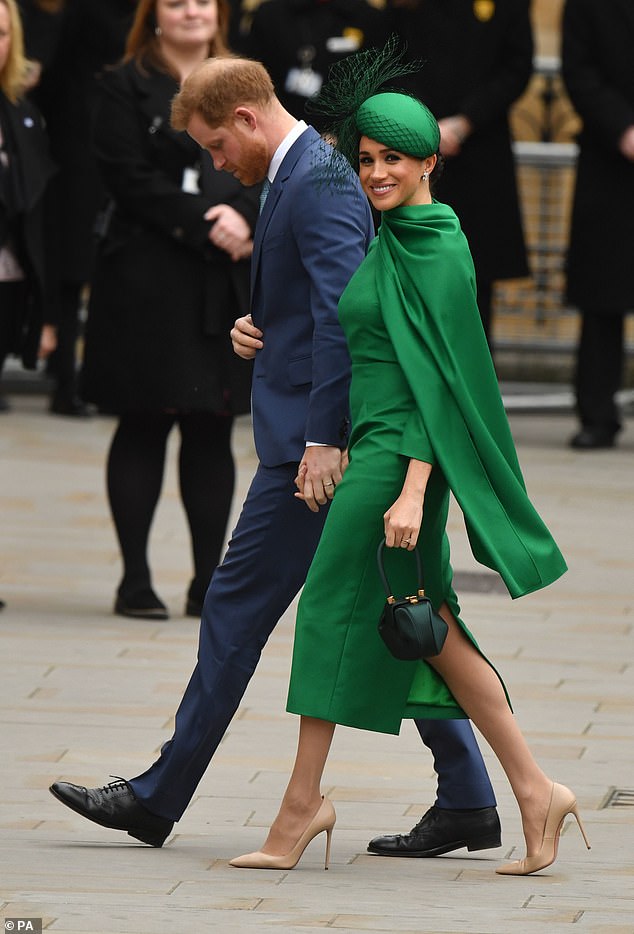 Elegant: The elegant, long-sleeved dress falls to a trendy mid-length and features cleverly-placed darts on the torso and waistline that serve to flatter the Duchess’s svelte frame 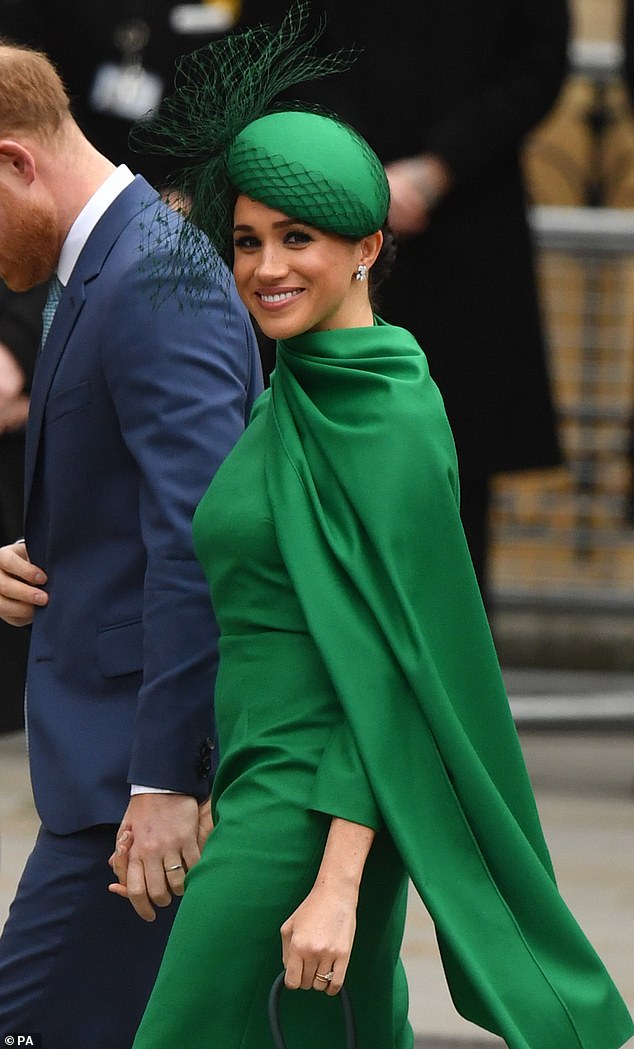 Touch of sparkle: The Duchess of Sussex wore her Birks ‘Snowstorm’ Earrings for the outing 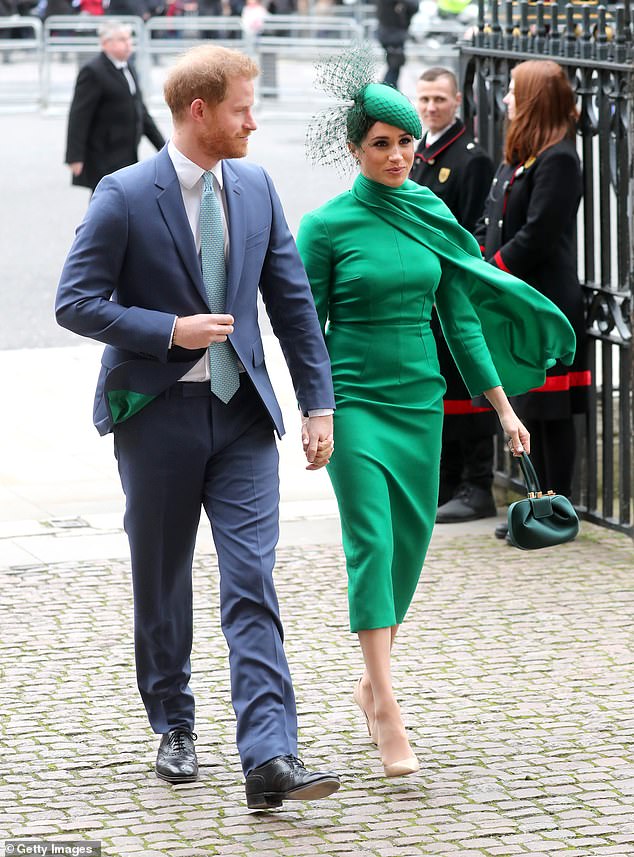 Green goddess: The dress is thought to be a bespoke creation by designer Emilia Wickstead 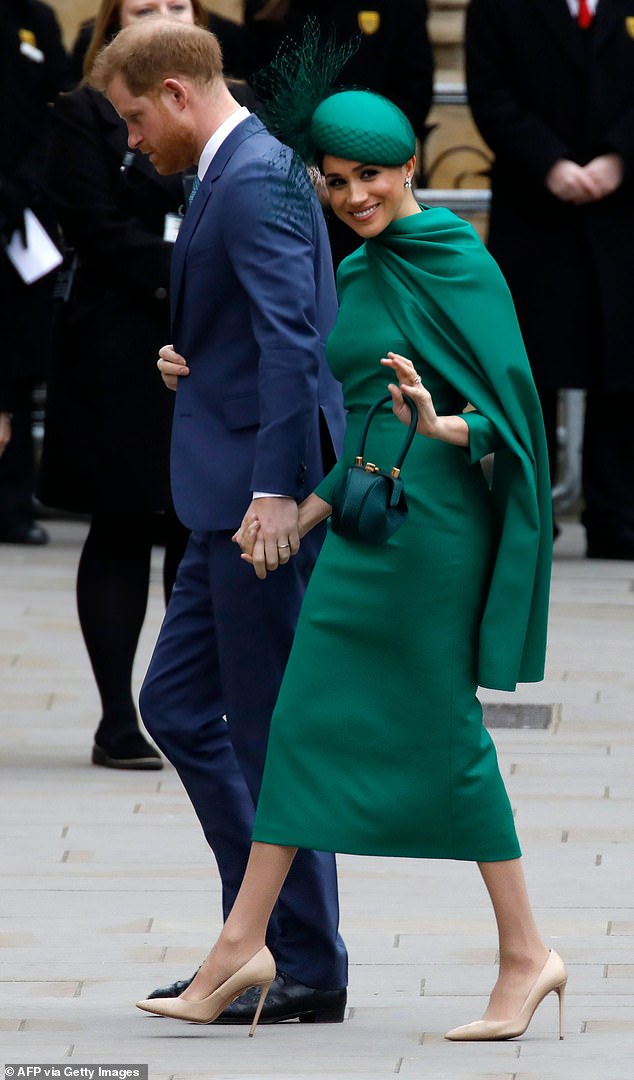 Radiant: The Duchess of Sussex was breathtaking in her designer creation this afternoon 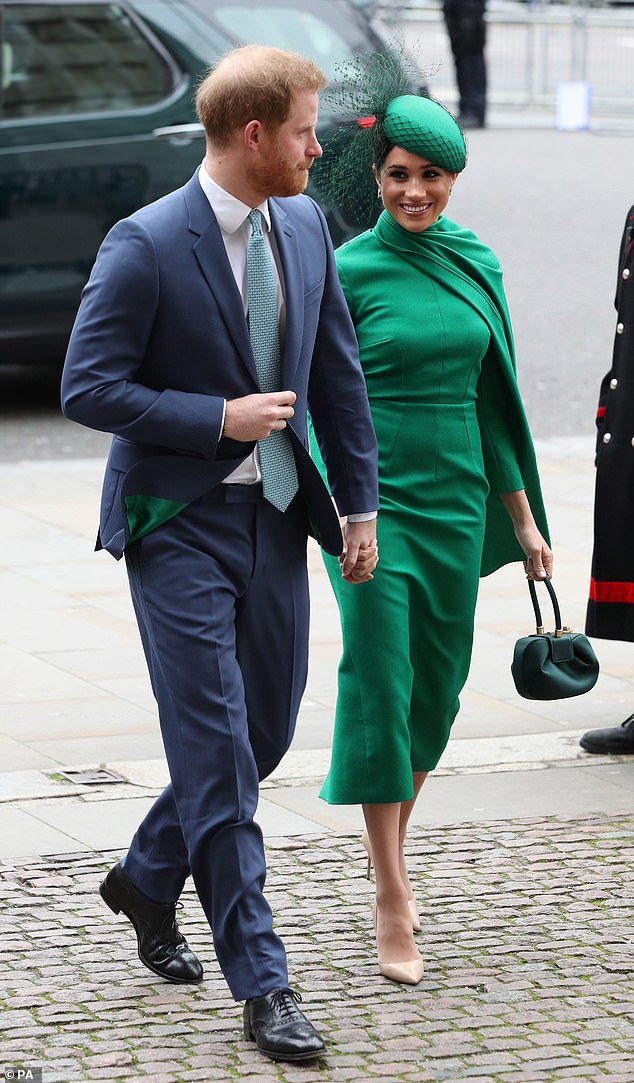 Beaming: Meghan appeared in high spirits as she arrived for the event with Prince Harry

She introduced a contrasting texture with a £1,695 ‘Demi’ satin green bag by socialite designer Gabriel Hearst, worn on previous occasions, and finished the look with a pair of nude heels by favourite footwear designer Aquazzura.

When it came to jewellery, Meghan chose her beautiful diamond trio engagement ring and her trusty pair of £6,950 Stowstorm earrings by Canadian designer Birks.

Meghan’s brunette locks were swept up in a delicate braided bun tied beneath her hat at the nape of her neck. 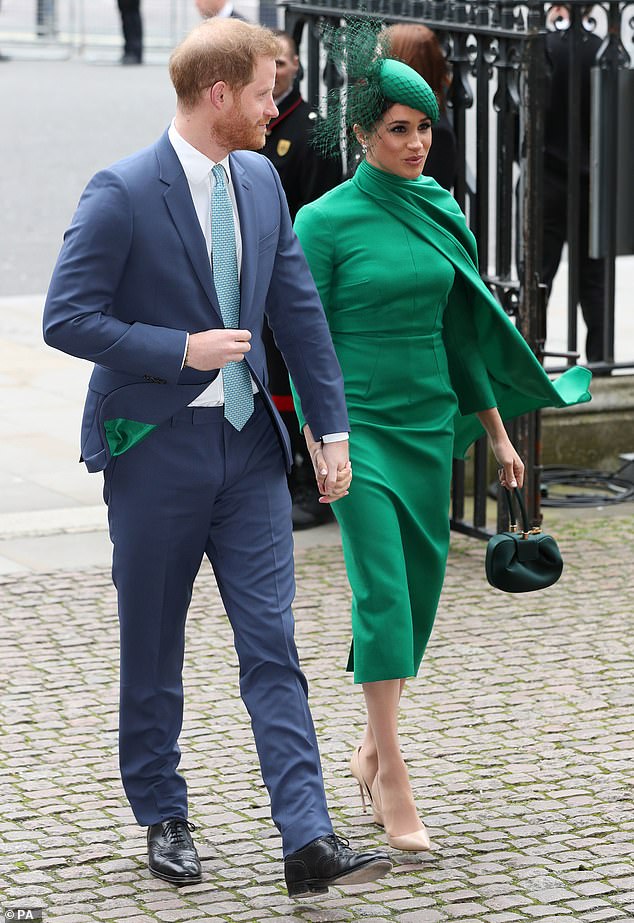 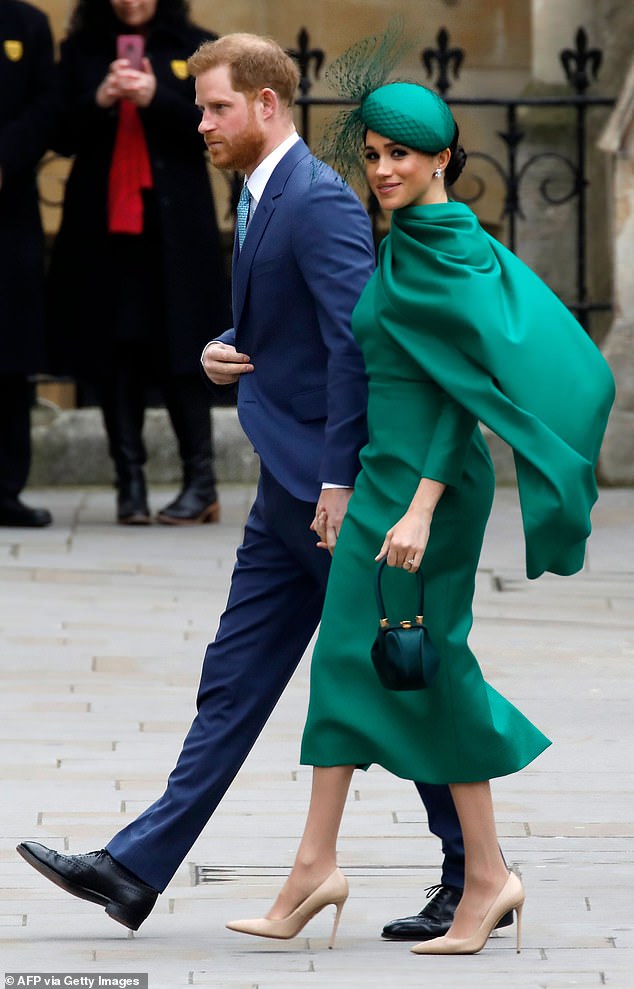 Best foot forward: The Duchess of Sussex chose a pair of nude shoes by Aquazzura today 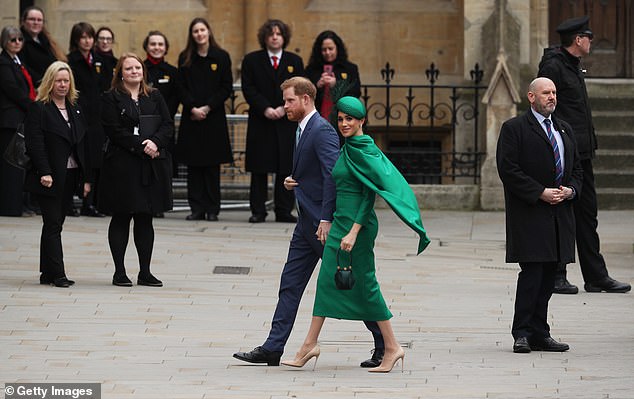 Showstopper: The Duchess of Sussex stood out in her emerald green ensemble, pictured

Prince Harry and Meghan are joining the monarch, the Prince of Wales, the Duchess of Cornwall and the Duke and Duchess of Cambridge as they carry out their last public royal duty before they walk away from the monarchy.

But, unlike last year, Harry and Meghan have been conducted to their seats, rather than waiting for the Queen’s arrival and walking through the church in London with the monarch and key royals as they did last year.

It also emerged today that last-minute changes were made to the royal arrangements, meaning Prince William and Kate, who were due to join the Queen in the procession, were also conducted to their places.

From March 31, the monarch’s grandson and American former actress Meghan will no longer use their HRH styles as they pursue a new life of personal and financial freedom, mostly in North America. 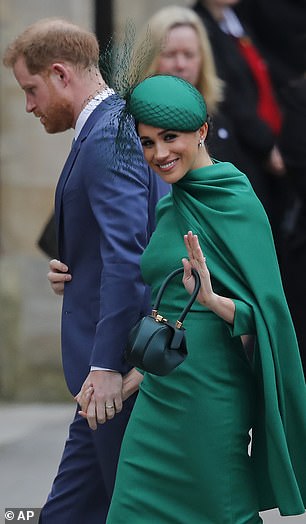 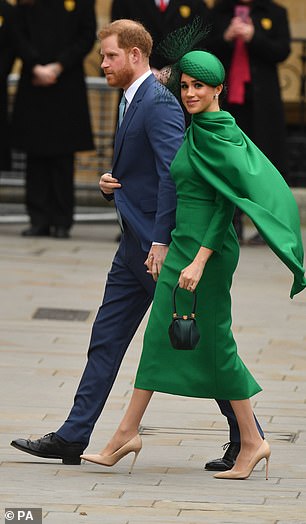 Splash of colour: The Duchess of Sussex stood out in her emerald green ensemble 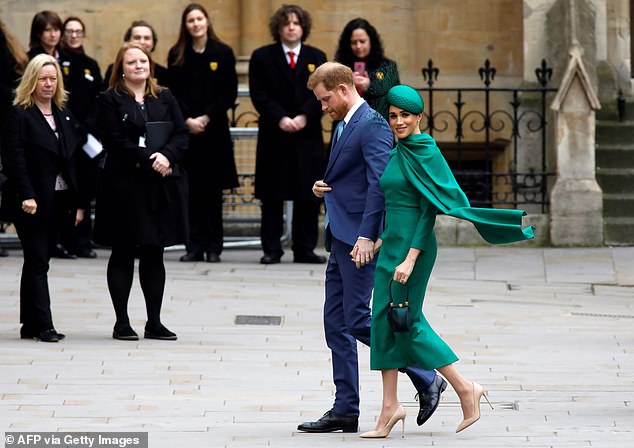 Hand-in-hand: The Duke and Duchess of Sussex were united on their arrival at the abbey