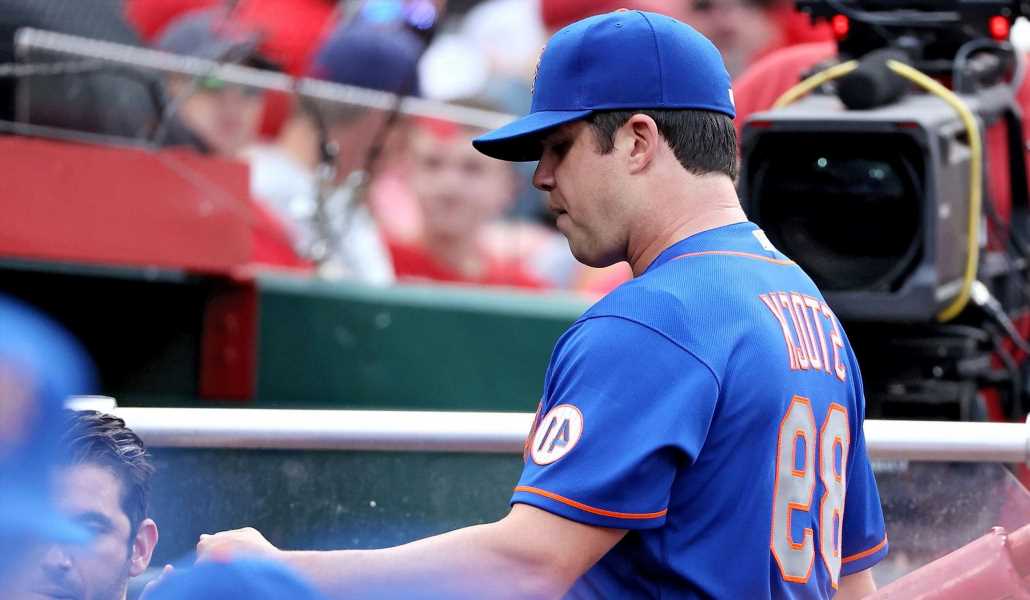 CINCINNATI — Three straight days of crushing the ball might have left the Mets a little spoiled.

Maybe it was the fatigue from playing three straight nail-biters or just the fact they ran into a quality left-handed starter Tuesday night, but the Mets were flat and not even this launching pad known as Great American Ball Park could help them.

On a night they lost another starting pitcher — albeit a replacement — to injury, the Mets lost 4-3 to the Reds for a third defeat in five games. The Mets will look to avoid losing a second straight series, when Marcus Stroman gets the ball Wednesday.

Robert Stock, recalled from Triple-A Syracuse to give the Mets a much-needed fresh arm, was removed after only one inning because of a right hamstring injury he sustained running to first base on a grounder. Stephen Nogosek, Yennsy Diaz, Geoff Hartlieb and Aaron Loup kept the game close, but the Mets never delivered the offensive support against Wade Miley and the Reds bullpen.

A night earlier the Mets blasted a season-high seven homers and scored 15 runs. In their final two games in Pittsburgh over the weekend they scored seven and seven runs.

After scoring 11 runs the previous night without hitting a homer, the Reds went deep three times. Jonathan India homered leading off the game for the Reds, and Joey Votto and Aristides Aquino went back-to-back with blasts against Nogosek in the third, giving the Reds a 3-1 lead.

Hartlieb, who arrived from Syracuse before the game — Jose Peraza was placed on the injured list with a fractured right middle finger — surrendered a run in the seventh that gave the Reds their margin of victory. Luis Guillorme slapped an RBI double in the Mets’ ensuing at-bat, but was left stranded at second base.

If the Reds decide to sell heading to July 30, the veteran left-hander Miley could be a nice addition for a team in need of rotation help. Miley, who has pitched to a 2.72 ERA and 1.18 WHIP in 17 starts this season, is signed through this season with a club option worth $10 million for 2022.

Miley lasted 6 ¹/₃ innings and allowed two runs, one of which was unearned, on seven hits and two walks with eight strikeouts. He was removed with two runners on base in the seventh at 104 pitches after striking out Brandon Nimmo.

The Mets pulled within 3-2 in the seventh when Brad Brach’s throw on Pete Alonso’s squib was mishandled by Joey Votto, for an error on the first baseman. Jonathan Villar raced around third and scored on the play, but the Mets missed an opportunity for further damage as Jeff McNeil hit into an inning-ending double play.

Alonso homered for the second straight game, clearing the left-field fence in the first inning for his 19th blast of the season. It was the sixth homer in July for Alonso, who entered the month with an .809 OPS for the month.

James McCann and Kevin Pillar reached on singles in the fourth to give the Mets a rally, but Villar and Nogasek struck out in succession. In the inning, Michael Conforto hit a shot to right field that Aquino caught leaping, preventing the Mets’ threat from accelerating.

Usher Disheartened by His Kids Reactions to His Music
Recent Posts