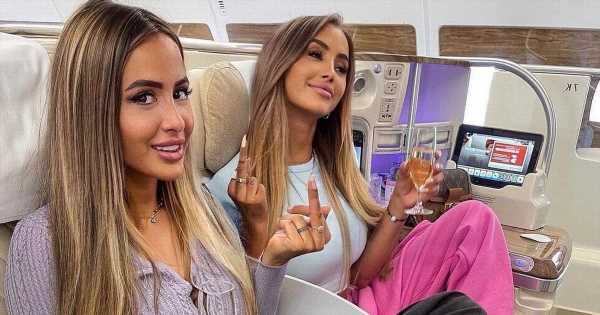 French stunner Oceane El Himer shared a photo with her 846,000 Instagram followers recently where she was seen posing in the business class section of a plane.

The photo saw her posing seductively as she wore a mint green cropped hoody and lilac jogging bottoms.

However, a fan later her spotted her in economy wearing the exact same outfit as shared the snapshot online.

This led followers mocking the model over her "fake life".

However, Oceane – who often poses in designer clothes from lavish locations – has now hit back at the haters with a new snap.

The photo saw her and a pal posing in what appeared to be business class as they put their middle fingers up at the camera.

The were seen sipping champagne as the posed for the photo.

She captioned it: "This time I promise I paid."

The post has so far racked up more than 131,000 likes, with many fans leaving laughing face emojis on the post.

However some people still didn't believe she was actually in business class seats.

One joked: "Alright can you now return back to your economy seat?"

While another quipped: "Take the pic quickly before they kick us back to the economy class."

A third added: "Who's on her flight, tell us if she's in business class."

After the original photo Oceane in economy found its way on the internet, she defended herself on Snapchat, saying she has "no shame in travelling in eco class".

In a statement, she said: "I took several flights to arrive in the south, including one in eco class.

"Took a picture and I accepted. I fully assume the fact of travelling in eco class, I'm not the type of girl who likes to show her money.

"Yes I traveled in eco and in business. And so? Where is the problem, I do not understand?

"Much more serious things are happening in life."

Kim Kardashian Breaks Down Over Kanye: I’m Such a Failure!

June garden jobs: What to do in the garden this month – top 4 ideas
Recent Posts