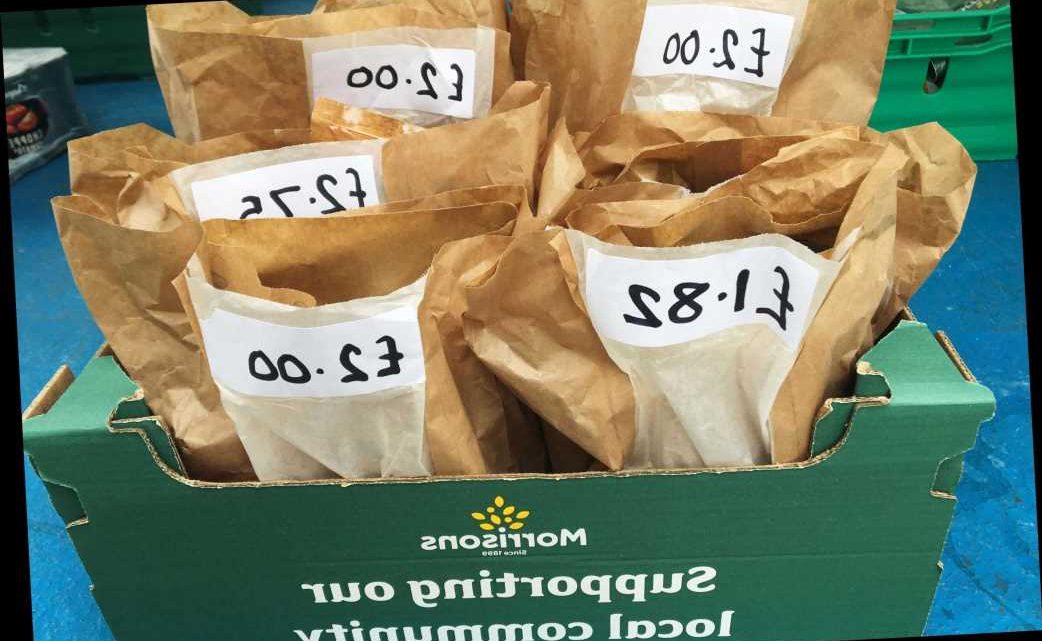 MORRISONS has been praised by shoppers for selling pre-packed bags of shopping which are then donated to food banks.

Brits can head to any branch of Morrisons in the UK and choose a pre packed bag – priced from £1 to £5 – to add to their basket or trolley while doing their weekly shop. 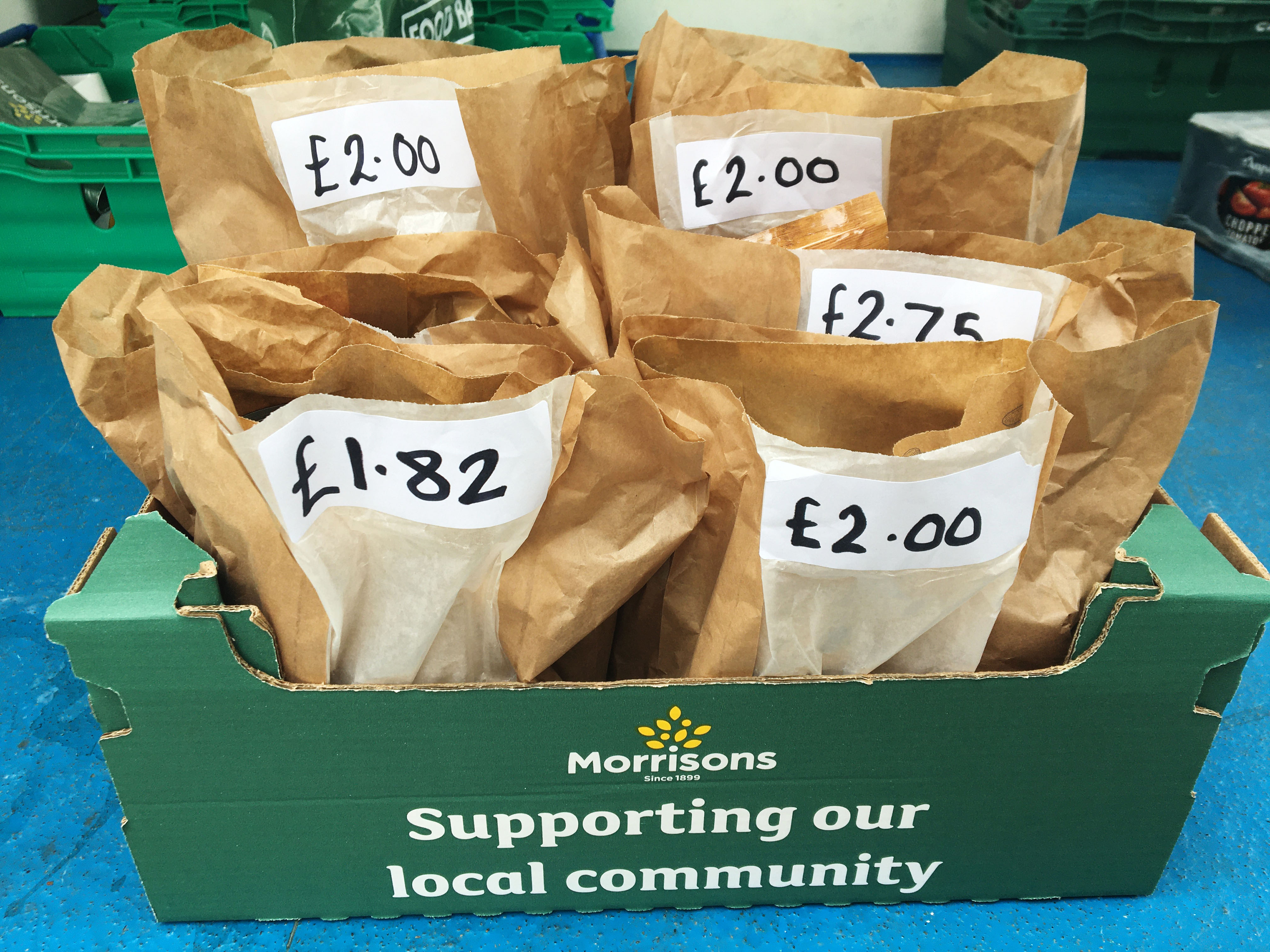 After paying for it, they can place the bags in a clearly marked trolley, box or cage in the store and they’ll be collected by food bank volunteers.

Inside the bags contain cupboard products, such as coffee, soup, tinned meat and fish as well as sanitary products.

The different branches work with their local food banks to see what is needed before compiling the packs.

Morrisons said it launched the bags, called Pick Up Packs, as a way to make things easier for the food banks, which are often overwhelmed with products such as pasta and bread, and so shoppers don’t need to spend time browsing the shelves working out what to buy.

Morrisons worker Michelle Leary, from Basingstoke, Hampshire, pitched the idea after she noticed that shoppers struggled with what to donate to food banks.

They’re normally located at the front of the store so you can pick one up as you arrive to do your own shopping. 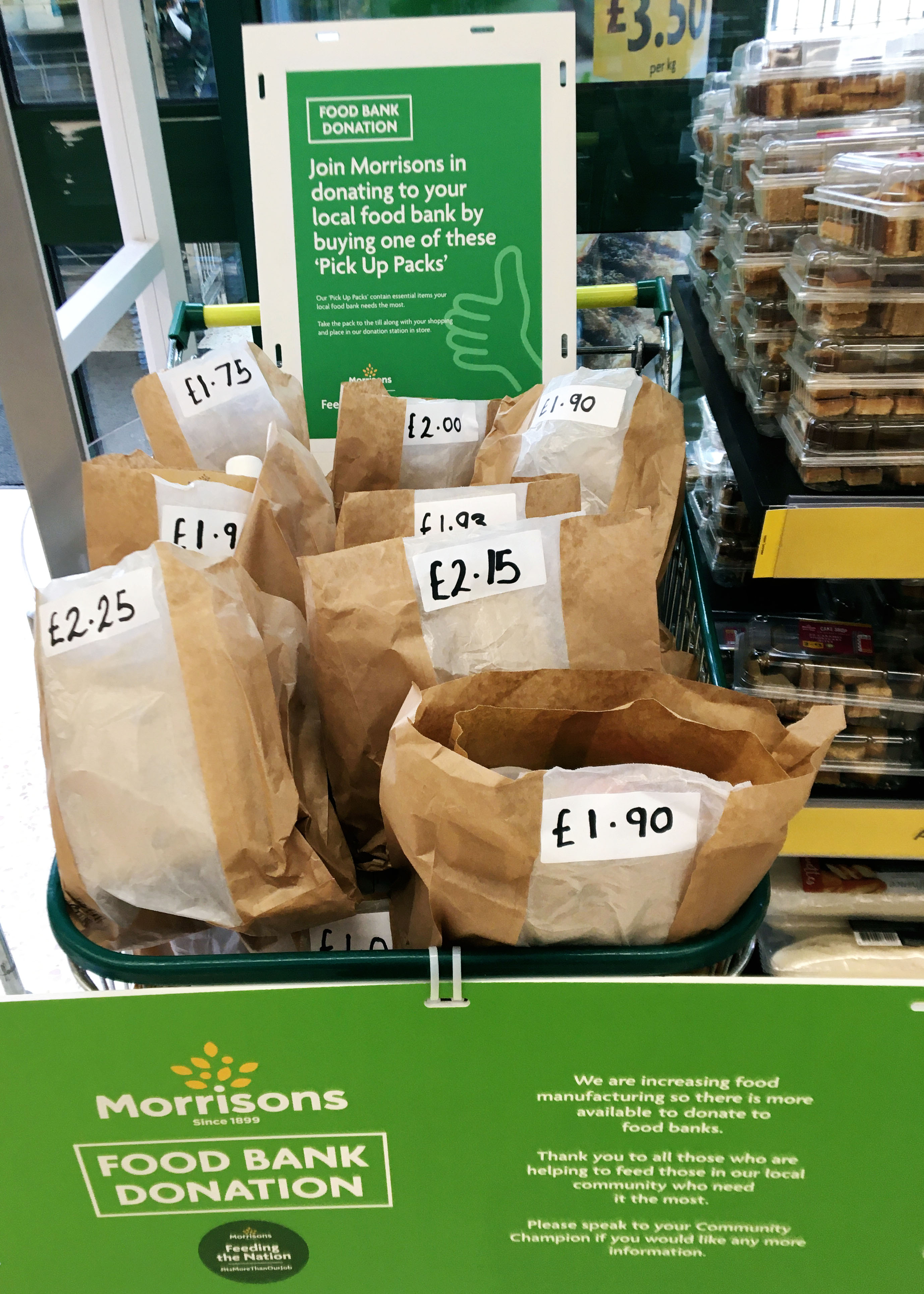 The drive has been praised by shoppers who spotted the bags while doing their shopping.

One mum, who posted about the bags on Facebook, said: “Love this idea from Morrisons. Just grab a pre-packed bag of shopping on your way in, pay for it with your usual shop then drop the bag off in the cage on your way out to be donated to the food bank.”

Her post received more than 12,000 likes and 64,000 shares from other users who were impressed with the drive.

It was picked up by a Twitter user, who then posted about the scheme and praised it too.

She said: “Such a fantastic idea from @Morrisons. Pick up a pre-packed bag of shopping on your way in (that costs less than a coffee!), pay for it with your shop, put it in the cage on your way out for the food bank. Be great if @asda, @Tesco, @sainsburys and @AldiUK could do the same?”

Her tweet also proved popular with Twitter users, with more than 18,000 people liking it and more than 5,000 people retweeting it.

One Twitter user wrote: “I often kick myself when I see the food bank bin on my way out of the supermarket and have forgotten to pick anything up, these are great! Any other type of signposting to remind you to pick up extra on the way in would still be useful too!”

Another added: “That is absolutely brilliant. So much easier than trying to remember to pick stuff up and separate it out. Well done Morrisons.”

As inspired by Marcus Rashford’s campaign to tackle food poverty in partnership with Aldi, Asda, Co-op, Deliveroo, FareShare, Food Foundation, Iceland, Kellogg's, Lidl, Sainsbury's, Tesco and Waitrose, Morrisons stores are also preparing 30 kids’ lunch boxes in each of their stores during half term.

The lunches contain a sandwich, piece of fruit and a Soreen mini loaf of banana bread.

The packs will then be donated to local food banks.

We've asked Tesco, Sainsbury's, Asda, Lidl and Aldi if they will be making similar packs and will update this article when we hear back.

Tesco runs food bank donations in its stores too and has recently announced it is going to donate two million meals a month to FareShare.

Sainsbury’s has donation points in its stores as well and launched an online donation point for FareShare, which is aimed at its shoppers who get their groceries delivered.

Asda also has food banks in store too and donated £5million to FareShare and food poverty charity the  Trussell Trust in January.

Aldi has a partnership with Neighbourly, a company that connects businesses with charities, where the supermarket donates food that is near its expiration date which is then collected by charitable organisations such as homeless shelters, school clubs and refuges.

Lidl has a partnership with Neighbourly too and it donates its surplus of food to local charities, food banks, community cafes and soup kitchens.

Here's how to claim free school meal vouchers in the UK.

We've also written a story explaining how to sign up to Healthy Start vouchers.

And here's a map showing where you can get free meals for kids during half-term.