Home » Lifestyle » ‘Most expensive water in history’: Minister to push ahead with new Murray-Darling Basin dams

‘Most expensive water in history’: Minister to push ahead with new Murray-Darling Basin dams

Federal Water Minister Keith Pitt says the government remains determined to build new dams in the Murray-Darling Basin, rejecting comments from a leading researcher that climate change would reduce the likelihood that they would fill.

The government had set aside $3.5 billion for critical water infrastructure and planned to press ahead with supporting major new dams or dam extensions such as Wyangala Dam in NSW. 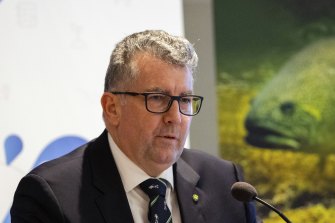 “The Commonwealth is committed to building more dams. It’s that easy,” Mr Pitt told a conference organised by the Murray-Darling Basin Authority on Tuesday in the NSW Riverina town of Griffith.

“If we want reliability of water supply that requires storage and water infrastructure,” he later told reporters.

Mr Pitt was responding to comments by Professor Mark Howden, director of the Institute for Climate, Energy and Disaster Solutions at the Australian National University, ahead of the Griffith conference that river flows in the Murray-Darling basin were already worse than climate change models predicted.

Average river flows in the basin had already dropped by 39 per cent over the past 20 years, with most of this due to climate change, Professor Howden told the conference, adding flows were already at or below the worst-case scenario predicted for 2050.

“This is the future coming at us really, really fast, and it’s not looking good,” he said on Tuesday. 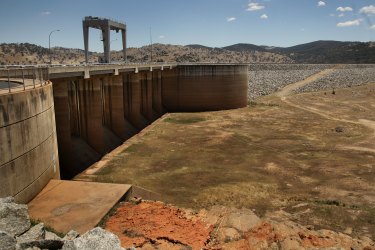 Wyangala Dam when it all but dried out towards the end of the Millennium Drought in 2009. The NSW government wants to lift the dam wall in a project that may end up being triple the initial estimated cost.Credit:Kate Geraghty

The construction of additional dams has been contentious, not least because of their rising costs.

A 10-metre increase in Wyangala’s dam wall, originally identified in 2019 as a $650 million project to improve the reliability of water for farmers in the Lachlan River, could now cost as much as $2.1 billion, documents reported by the Herald this year show. The federal government has pledged to contribute the funds.

NSW Labor’s water spokesman Clayton Barr there was good reason to be sceptical when these projects were less than half the current price.

“If they were obvious and easily done, we’d have built them before.”

Helen Dalton, a water spokesman for the Shooters Fishers and Farmers Party, said the big problem with the projects was “the complete lack of transparency”.

Taking a midway price tag at $1.5 billion, that would amount to $70,000 per megalitre, “making it the most expensive water in history”, she said. 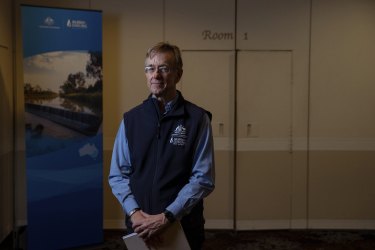 Phillip Glyde, Chief Executive of the Murray Darling Basin Authority, was among those addressing a rivers conference in Griffith on Tuesday.Credit:Dominic Lorrimer

Officials from the MDBA said any new dams would not increase the amount of water available for any particular river value and would even reduce it if there was more evaporation from a larger storage.

MDBA’s chief executive Phillip Glyde said the authority was concerned about the effect on the environment.

“You’re basically changing the time in which you’re using [the water],” Mr Glyde said. “You’re moving where you’re holding the water [so that] it’s a headwater storage rather than a wetlands if there’s a big flood.”

Any new dam would also require the particular state to resubmit its water resource plan for that valley, and show how it would alter environmental water flows.

“We’ve got to have a look at that change in the plan, and we have to accredit it,” Mr Glyde said.

Mr Pitt also announced that it had set aside $25 million, split evenly by Queensland and NSW, to improve metering in the northern Murray-Darling Basin.

“This is all about ensuring we can get transparency and trust in the information you get…to give confidence to all users,” he said, adding the money would include boosting satellite monitoring water extractions.