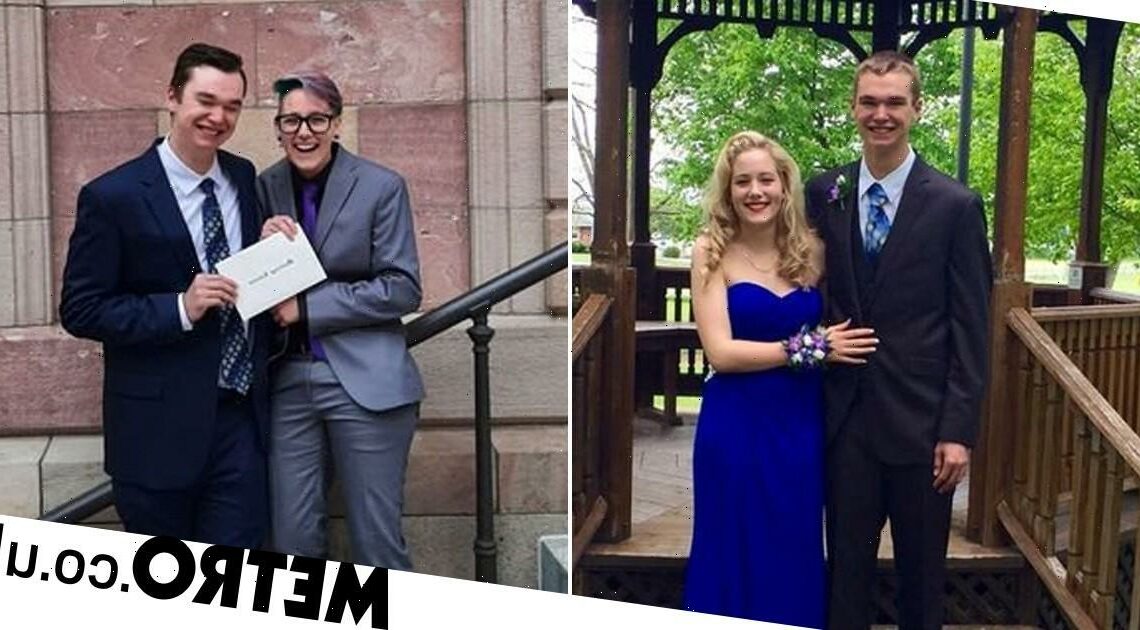 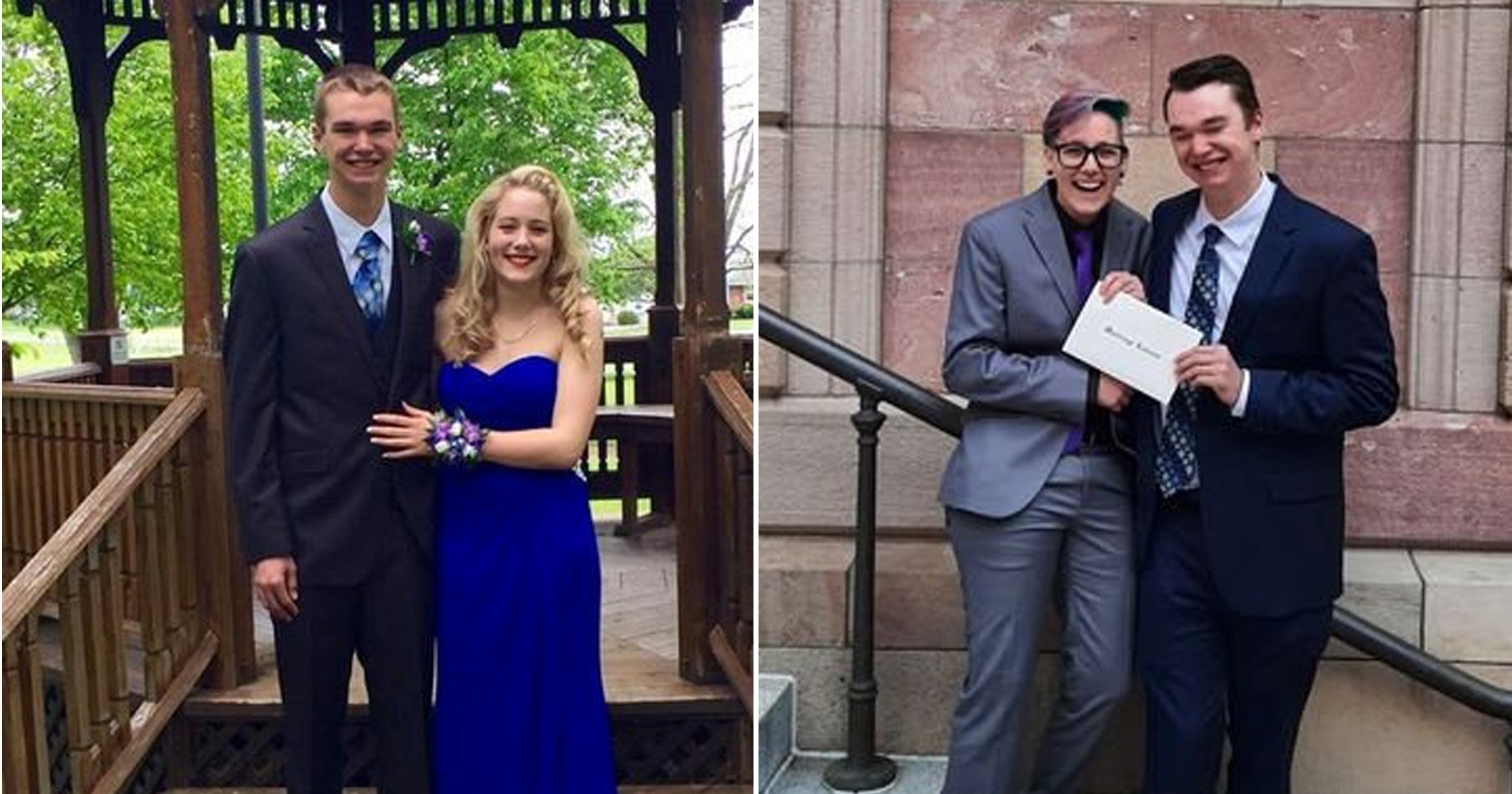 Elvis Smith, 23, was afraid his childhood sweetheart Ryan Smith, 24, would break up with him when he came out as a non-binary trans man in June 2019.

Five years into their relationship, artist Elvis, then identifying as a woman and using the name ‘Elorah’, told Ryan, a nurse, that he might be transgender.

But despite Elvis’ concerns, Ryan supported his partner’s decision – and now, the pair are engaged.

Elvis says he had a crush on Ryan from the moment they met in August 2011.

’We were in the same class together and I’d always tease him,’ Elvis said. ‘I think it was obvious to everyone but Ryan that I liked him.’ The pair hit it off as friends and started dating after getting closer in September 2015.

But Elvis started feeling differently about their identity in 2019, saying he had always felt uncomfortable in his body and dressed in baggy ‘tomboy’ clothes.

‘I’d see people on social media talking about transitioning and I’d think ‘I wish I was trans’,’ he said. ‘Then I realised that’s not something someone who isn’t transgender thinks. It made sense why I’d always wanted to dress like a tomboy and got on better with males. I was always in baggy jeans and dinosaur t-shirts growing up,’ he said.

Elvis was terrified to tell Ryan, but eventually bit the bullet. ‘I wasn’t exactly sure at that point what being transgender meant for me, but I told him I was a non-binary transgender man,’ he said.

‘It was a very surface level conversation at first, but Ryan was immediately supportive.’ As Elvis started to understand more about himself, he continued to open up to Ryan about it.

To his surprise, his boyfriend Ryan was completely onboard.

An artist, from Lancaster, Pennsylvania, US, Elvis said ‘I was terrified Ryan would break up with me when I told him I was non-binary and transgender, but he was immediately supportive.

‘The whole way through we’ve told each other ‘if this isn’t what you signed up for then it’s okay to leave. But Ryan has stuck by me.’

There have been some challenging times for the pair though.

Evlis explained: ‘We’ve had many tearful conversations because I know he once had the expectation of a bride in a dress and he never signed up for a husband.

‘He helped me choose new clothes and picked a new name for me. He’s my rock and has unconditional love for me.’

Ryan, a nurse, said: ‘It’s been difficult at times but we’re getting through it. We’ve always talked about having kids and when Elvis came out, it became a little more confusing as to what that would look like.’

‘The difference in style and appearance were difficult for me to adjust to at first,’ he adds. ‘I’ve always viewed myself as straight and I was worried that I wouldn’t be attracted to someone who looked and dressed masculine.’

But because Elvis is so much happier and more themselves now, Ryan finds them even more attractive.

Elvis started his physical transition in March 2021 – cutting his hair short, binding and packing daily and beginning to style himself differently. Elvis isn’t currently taking any hormone treatment, due to an autoimmune disease, but hopes to be able to in the future. He also hopes to eventually have top surgery – an operation that changes the look of a trans person’s chest.

‘I started to change my style up and Ryan would always be encouraging of what I wanted to try,’ Elvis said. ‘If I was shy to wear something he would be, “like come on let’s try it you’ll look awesome.”’

‘We struggle sometimes with outside opinions, but we have unconditional love for each other,’ Elvis said.

Just a month after Elvis began his transition, Ryan proposed at sunrise on a beach in Outer Banks, North Caroline. The pair eloped and tied the knot in June 2021.

‘We had lots of tearful chats and I made sure he was definitely on board before we got married,’ Elvis said. ‘We talked a lot about the future physical changes I wanted to make, but every time he was just supportive.”

Now, they’re happier than they’ve ever been and are working out how they can start a family – which they cannot wait for.

‘We can’t wait to have kids together, but we don’t know what that will look like for us yet. We’ve talked about me being a seahorse dad, surrogacy and adoption, and it’s my dream to foster one day,’ he explained.

‘When Ryan and I first started dating, I’m not sure this is what he expected but we had to adjust our expectations and we’ve found that this relationship still works for us. I’ve been on a huge self-love journey and Ryan has been a massive part of it.’

Here’s when you can watch The Crown season 5

I'm a mum & have banned McDonald's – it's cheaper for kids to eat sushi & scallops, people just don't know how to cook | The Sun
Recent Posts