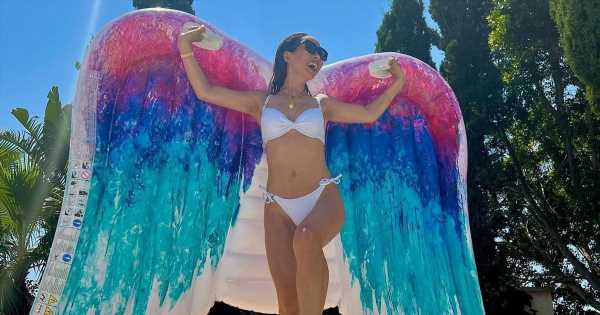 Myleene Klass reminded everyone of her infamous I'm A Celebrity shower scene as she shared some shots of herself in a skimpy white bikini.

The singer and TV star set pulses racing a few years back when she slipped into a teeny white bikini and lathered up in the jungle camp's shower when she was a contestant on the reality show.

And she popped on a very similar suit for her latest Instagram snaps, which led to her being called "hotter than the weather".

The pictures showed Myleene, 44, parading her killer curves in a gorgeous white string bikini with a plunging neckline and ties at the sides.

Her long dark hair was pulled back and she was wearing a pair of dark sunglasses as she dipped a toe in an inviting-looking pool.

The mum-of-three clutched a huge multi-coloured inflatable pair of wings behind her as she posed for the snaps.

Myleene also shared one of the images on her Instagram Story, teasing: "If in doubt… get the white bikini out."

Fans were blown away by the sizzling snaps and many posted flaming hot and heart emojis to show their appreciation.

"Looking hot gorgeous," one person posted in the comments section.

"So incredibly hot… the weather too," teased someone else.

One posted: "You look hotter than the weather." "Still rocking it!!!!" said another of the star's fans.

Dancing On Ice's Alexandra Schauman joked: "I want a pair of wings like these."

Myleene was a contestant on I'm A Celebrity… Get Me Out Of Here! in 2006 and was a huge hit with viewers, not least because of the shower scene.

She finished in second place in the end, behind Busted star Matt Willis.

Where is Allyssa from The One That Got Away now?