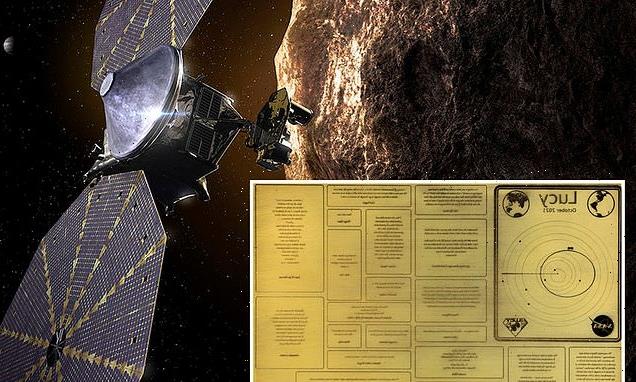 NASA’s asteroid-exploring ‘Lucy’ spacecraft -named in honor of The Beatles – will carry the words of Albert Einstein, Carl Sagan and Martin Luther King Jr. into space

NASA’s Lucy mission to the Trojan asteroids, a group of space rocks that share Jupiter’s orbit around the sun, will bring some inspired words from some very famous people with it when it launches in October 2021.

And Carl Sagan, Albert Einstein, The Beatles, Martin Luther King Jr. and more will be among the group.

The US space agency announced late Monday that the upcoming mission, like the Pioneer 10, Pioneer 11, Voyager 1 and Voyager 2 spacecraft before it, will bring a plaque that will act as a ‘time-capsule featuring messages to our descendants.’

Named after the fossil skeleton of a human ancestor, the Lucy spacecraft was also inspired by the hit Beatle’s song, Lucy in the Sky with Diamonds.

NASA noted that these asteroids, which are beyond the main asteroid belt, are ‘in many ways “fossils” from the formation and evolution of the planets.’ 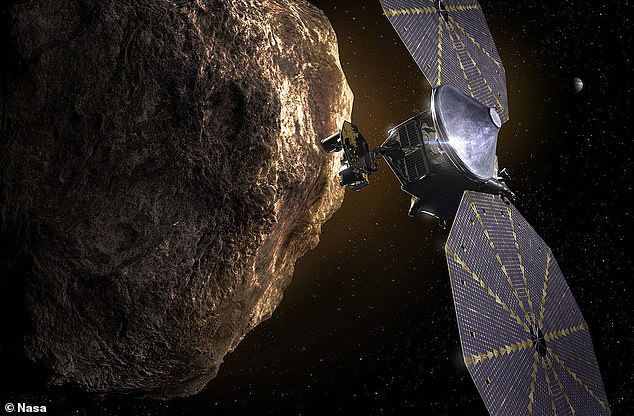 NASA’s Lucy mission to the Trojan asteroids that orbit Jupiter will bring a plaque that will act as a ‘time-capsule,’ including quotes from Carl Sagan, Albert Einstein, The Beatles and more. 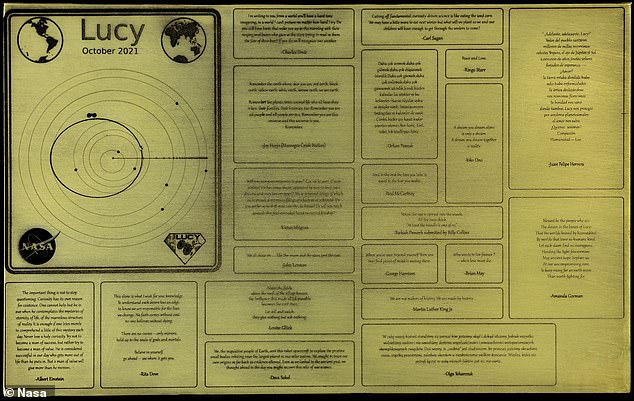 Quotes from Carl Sagan, Albert Einstein, The Beatles and more are on the plaque. It also has an image of the Solar System as depicted on the Oct. 16 launch date and the original trajectory of the craft

Among the quotes included on the plaque are:

‘Above the fields, above the roofs of the village houses, the brilliance that made all life possible becomes the cold stars.

Lie still and watch: they give nothing but ask nothing.’ – Albert Einstein

‘Who Wants to live Forever? – if love must die.’ – John Lennon

‘I’m writing to you from a world you’ll have a hard time imagining, to a world I can’t picture no matter how hard I try. Do you still have birds that wake you up in the morning with their singing and lovers who gaze at the stars trying to read in them the fate of their love? If you do, we’ll recognize one another.’ – Carl Sagan

Also included are the other members of the Beatles, Sir Ringo Starr, Sir Paul McCartney and George Harrison, as well as Yoko Ono, National Youth Poet Laureate Amanda Gorman and several other poets.

In addition to the quotes, the plaque has an image of the Solar System as depicted on the launch date of October 16, 2021 and the original trajectory of the craft.

The plaque was installed on the spacecraft on July 9 at Lockheed Martin Space in Littleton, Colorado.

The messages are similar to the ‘Golden Record’ meant for aliens that NASA included as part of the Voyager missions in the 1970s.

Included in the Golden Records were maps, images, greetings in 54 languages and other depictions of life and culture on Earth.

The object of the Lucy mission is to study these ancient asteroids in an effort to learn more about the Solar System, as well as the origin of the planets.

Unlike the aforementioned Pioneer and Voyager missions, Lucy will not leave the Solar System and head into interstellar space, so the plaque will act as a reminder to future generations of what the mission’s purpose was.

‘After Lucy finishes visiting a record number of asteroids for a single mission in 2033 (8 asteroids on 6 independent orbits around the Sun) the Lucy spacecraft will continue to travel between the Trojan asteroids and the orbit of the Earth for at least hundreds of thousands, if not millions of years,’ NASA wrote in the release.

The robotic spacecraft, which has a 12-year journey, will arrive at its first destination, a main belt asteroid, in 2025.

Explained: The difference between an asteroid, meteorite and other space rocks

An asteroid is a large chunk of rock left over from collisions or the early solar system. Most are located between Mars and Jupiter in the Main Belt.

A comet is a rock covered in ice, methane and other compounds. Their orbits take them much further out of the solar system.

A meteor is what astronomers call a flash of light in the atmosphere when debris burns up.

This debris itself is known as a meteoroid. Most are so small they are vapourised in the atmosphere.

If any of this meteoroid makes it to Earth, it is called a meteorite.

Meteors, meteoroids and meteorites normally originate from asteroids and comets.

For example, if Earth passes through the tail of a comet, much of the debris burns up in the atmosphere, forming a meteor shower.