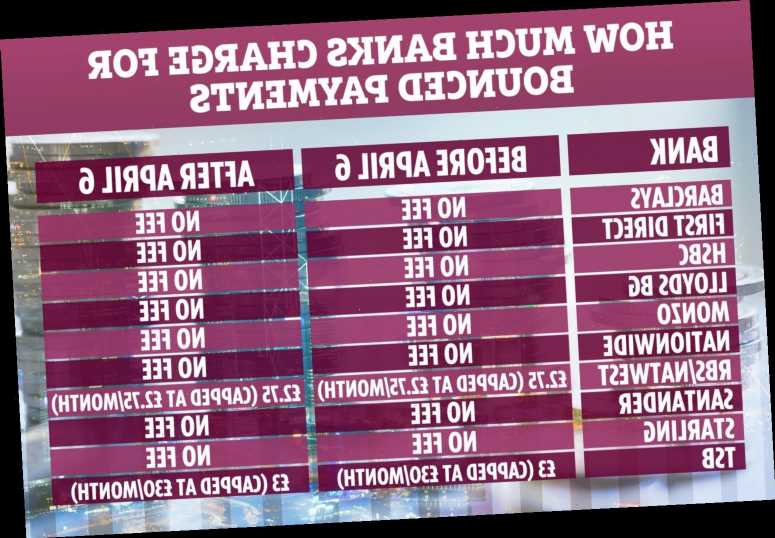 TSB, RBS, and NatWest have admitted they'll continue to charge fees for bounced payments that could push people further into debt, despite new overdraft rules coming into force.

From April 6, lenders are banned from charging unarranged overdraft fees and are instead introducing interest rates of up 49.9 per cent. 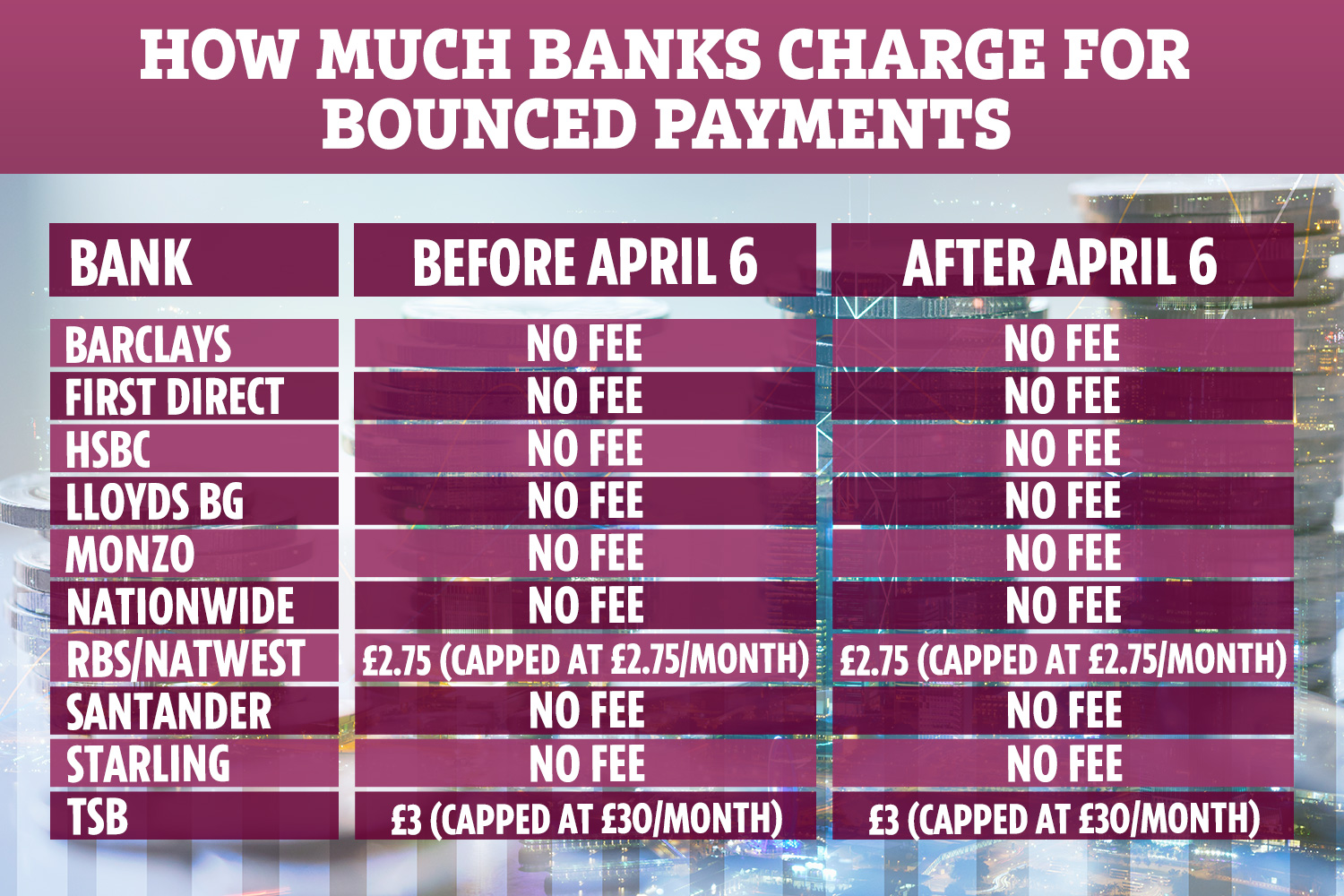 The idea is to make it easier for customers to compare costs, but the city watchdog hasn't gone as far as forcing banks to remove all overdraft fees.

This means banks can still get away with charging for bounced payments, also known as refused payments or unpaid item fees.

These apply when a bank refuses or returns a payment because you're in an unarranged overdraft, which is borrowing that's not been agreed in advance by your lender.

Over the past few months, banks have been axing these fees ahead of April but three of the ten major banks we spoke to told The Sun they'll continue to charge them.

What if I can't afford the new overdraft charges?

BANKS have been warned by the Financial Conduct Authority (FCA) to help customers with large overdraft debt.

It suggests banks and building societies waive or reduce interest or continue overdrafts at the current rate where people are struggling.

Alternatively, they could set up a repayment plan that could include moving borrowers to more suitable products, such as personal loans that will likely have much lower interest rates.

If you're struggling, contact your provider as soon as possible to discuss your options.

You might also want to consider taking out an interest-free money transfer credit card to repay the overdraft, so you end up owing the card instead.

The idea is you then repay the card before the 0 per cent period ends and you're charged interest.

Check out guide on how to shift debts onto 0 per cent balance and money transfer cards and use a pre-eligibility checking tool to see what cards you're likely to be accepted for before applying.

This reduces the risk of your credit score being dented by rejections and multiple applications.

NatWest and RBS, which are both part of the Royal Bank of Scotland Group, say they'll continue charging £2.75 for returned item fees – although this will be capped at one charge per month.

It also has a total unarranged overdraft fee cap of £80 at present, which will fall to £20.

Meanwhile TSB, will continue to apply a £3 fee per unpaid item, which is capped at a maximum of three charges per day and subject to an overall maximum of £30 a month alongside any other unarranged overdraft charges.

These fees are in addition to the banks' new overdraft rates of up to 39.49 per cent for RBS and NatWest customers, and a flat rate of 39.9 per cent for TSB users.

The Financial Conduct Authority (FCA) declined to comment but did confirm unpaid item fees are allowed as long as they're proportional to the actual cost of refusing such payments.

Seven in ten – or 18.2million people – will be better off as a result of the new system, but the FCA has conceded around 7.8million will be in a worse position. 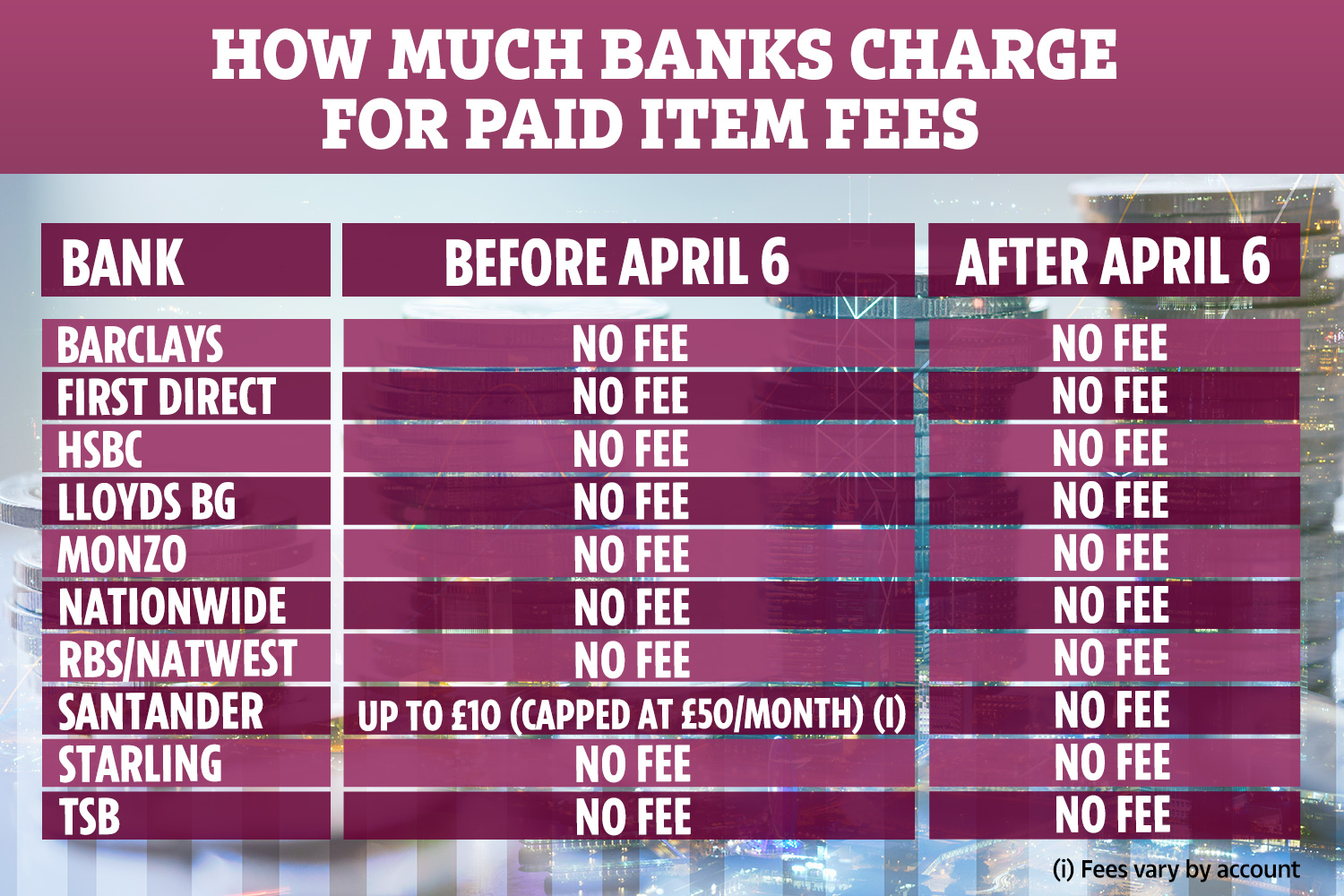 She said: "The FCA changed the rules so consumers could have a clear picture of the cost of borrowing with an overdraft.

"Incremental charges, such as TSB’s with a higher monthly maximum charge, make it difficult to know just how much you’ll end up paying.

"This can add to the problem for consumers who’re already in a difficult financial situation.

"If banks do continue with these charges, they should make sure they’re clearly signposted and easy to calculate."

Paid item fees, will however, be banned from April 6 as part of the overdrafts shake-up.

This is a charge for allowing a transaction to go through despite being in an unarranged overdraft and not having the cash to cover the payment.

Currently, Santander is the only bank of the ten we asked to still charge this fee, but it will stop from April 6.

Its customers are hit with a fee of up to £10 per paid item depending on the account they have, with total unarranged overdraft fees capped at £50 a month.

A spokesperson for RBS said: “The majority of our customers, that use their overdraft, will pay the same or be better off as a result of these changes.

"We’ve been working hard to make sure we have the right support in place for any customers who are negatively impacted by these changes.”

A TSB spokesperson added: “We charge our customers a £3 returned item fee, which is proportionate to the cost of returning the payment.

"We will also always send customers a text alert before we return a payment, giving them the chance to avoid charges."