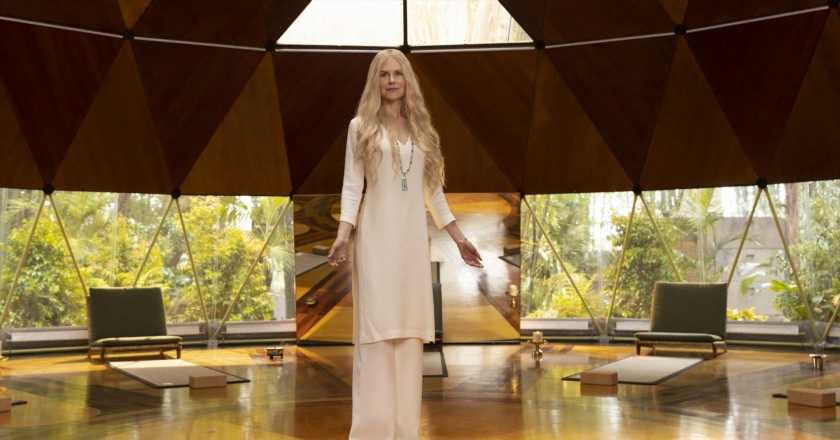 This article contains spoilers for Nine Perfect Strangers, so do not proceed unless you are fully up-to-date with the Hulu series.

Once upon a time, wellness was a relatively straightforward concept. We’d eat our five a day, do a bit of light exercise, and come 5.30pm, get outdoors for a bit of fresh air after work. If we were really on our A game, we’d do a spot of meditation, stick to the recommended units of alcohol, and maybe even treat ourselves to a massage when life got a bit too much.

That was then. These days, wellness has grown into a $4.5 trillion industry that encompasses everything from photogenic grain bowls and seaweed wraps and, if you’re Gwyneth Paltrow, jade vaginal eggs. It has ushered in a modern iteration of wellness that is expensive, exclusionary, and driven by constant self-improvement. It is a movement that glorifies thin, white, able-bodied, cishetero bodies. It is a business that is making people profoundly unwell.

In the world of entertainment, the wellness-industrial complex is also trending. Hot on the heels of HBO’s The White Lotus, a show that centres on an unhappy bunch of rich people at a five-star resort in Hawaii, Hulu’s new miniseries Nine Perfect Strangers delves into the dark undercurrent of elite wellness head on. Created by the Big Little Lies team of Nicole Kidman and David E. Kelley and adapted from Liane Moriarty’s bestselling 2018 novel of the same name, the show follows nine guests who venture to a wellness retreat called Tranquillum House for a 10-day encampment. They are there, in the words of one optimistic visitor, in the hope of being “transformed”, and the fact that there are only nine of them certainly speaks to its exclusivity: every inch of the resort screams wealth, from the crystalline infinity pools and luxurious living quarters to the personal wellness “consultants”, who make it their business to follow their guests with an unnerving level of devotion.

The guests, as you might have guessed, are all troubled souls with a ton of baggage, and we get a taste of their dysfunction as we meet them in the first episode. They include the Marconi family, consisting of dad Napoleon (Michael Shannon), an extremely likeable high-school teacher; brittle Mum Heather (Asher Keddie), who seems a hair’s breadth away from either crying or screaming; and their 20-year-old daughter Zoe (Grace Van Patten), who are all grieving the loss of a family member and have been given a discount to attend the retreat.

Then there’s Jess (Samara Weaving), an appearance-obsessed influencer and her emotionally detached, lottery winner husband Ben (Melvin Gregg), who are facing relationship issues. Frances (Melissa McCarthy) is a bestselling romance novelist who is recovering from a catfishing scheme and the news that her publisher has dropped her forthcoming book. Lars (Luke Evans), a sharp-tongued cynic with a secret motive for his attendance; Carmel (Regina Hall), a meek single mother with a propensity for violence; and Tony (Bobby Cannavale), a former professional footballer with an addiction to prescription meds, complete the cast.

The guests aren’t alone, of course. They’ve all been hand selected by Masha Dmitrichenko (Nicole Kidman), a statuesque wellness guru who Frances hypes up to the group as “an amazing, mystical, Eastern-bloc unicorn”. She spends most of her time wandering uninvited into people’s bedrooms and watching CCTV of her guests’ movements with a creepy smile on her face, unless she’s giving orders to her deputies Yao (Manny Jacinto) and Delilah (Tiffany Boone) – and interfering in their relationship.

This is no ordinary wellness retreat, though; certainly not the kind that Frances comically speculates will involve “massage, and maybe some gentle fasting.” Tranquillum House, we learn, is a place where daily activities include digging your own grave-like “ditch” and lying in wait for a handful of soil to be chucked on you from on-high. Where food and drink is tailored with clinical precision to metabolic needs, and vials of blood are extracted as casually as if taking a temperature. In one particularly eerie scene, an exercise in fasting and foraging turns into a sacrificial ritual. The guests are there, Masha insists, to get well; but as the treatment methods begin to take an increasingly traumatic effect, it’s uncertain whether she really does have their best interests at heart.

That’s the thing about Nine Perfect Strangers. You think the darkest part of the show is going to be the unorthodox treatment methods that push the guests to the brink. But what’s actually way more sinister, is not knowing whether Masha really is a force for good, or if she’s running with her own sensationally deluded agenda. This is a woman, after all, who ominously declares at the group orientation that she means to “fuck with all of you”. A woman who had no apparent interest in health or wellbeing until a near-death experience prompted a reinvention as a wide-eyed, celestial enigma. A woman who continually voices her determination to heal her guests but violates boundaries, manipulates their moods, and seems to really relish their suffering. You can’t help but feel a shiver run down your spine when Masha tells a sobbing Frances that she will get her well. What exactly is it, we wonder, that determines Masha’s idea of good health?

Yes, Tranquillum House is a retreat built on very shaky foundations, and the lack of authenticity isn’t purely a dramatic construct. It’s a reminder that the wellness industry is pervaded by misinformation, commodification, and a lack of accountability in real life, too – just look to social media for proof of that. It’s an industry that frequently elects leaders on the strength of a personal brand. Which perpetuates unattainable ideals around what a desirable body should be like. Which co-opts ancient medicines and practices and passes them off an aspirational lifestyle. Which prescribes quick tip advice in the place of individualised care. Which capitalises on individual malaise for personal gain. “What a socially progressive thing to do, to put healing ahead of profit mode,” Napoleon declares in one of the opening scenes, a look of genuine wonder on his face as he raises the first of many red flags.

Ultimately, it shouldn’t really be a surprise to us that the ensemble will do just about anything Masha tells them to do. The wellness industry is filled with self-styled health gurus who convince people to do their bidding even with questionable knowledge and motivations. People who promote the idea that good health is accessible, if you’ve got the money, access and unwavering belief that the individual is responsible for their own salvation.

Good health, of course, certainly isn’t the preserve of the privileged. Good health is for everyone. But as Nine Perfect Strangers proves, not everyone should get to be in charge of people’s health.

Arthritis diet: The 4p vegetable that ‘could reduce your risk’ of rheumatoid arthritis
Recent Posts