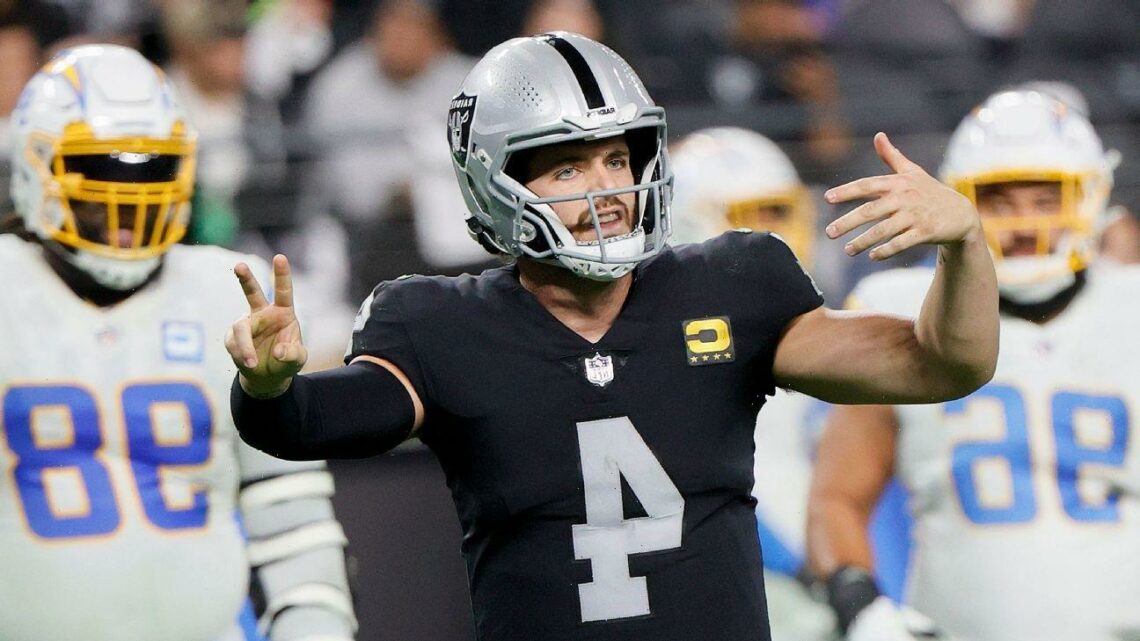 For bookmakers, the final game of Week 18 had turned into one of their biggest decisions of the seasons. Millions of dollars in winnings from long-shot parlays were riding on the Sunday night game between the Los Angeles Chargers and Las Vegas Raiders.

The betting public was heavily invested in, of all things, a tie.

Upsets by the Jacksonville Jaguars and Pittsburgh Steelers on Sunday afternoon created a scenario in which the Chargers and Raiders would each earn playoff berths with a tie, while a loss would end both teams’ postseason hopes. The incentive to play for a tie had increased.

Since overtime was implemented in 1974, 27 regular-season games, less than 1%, have ended in a tie. Sportsbooks typically offer anywhere from 60-1 or higher on a tie. This week, at The Borgata in Atlantic City, the odds of Chargers-Raiders game ending in a tie were bet down from 50-1 to 11-1.

“This game has attracted the most interest in a tie for the NFL that I can recall,” Tom Gable, sportsbook director for The Borgata, said Sunday night.

The most popular two-team parlay at sportsbook PointsBet was Jaguars on the money-line and a Chargers-Raiders tie. Before the Sunday night game kicked off, PointsBet’s liability on a tie had reached seven figures, according to a spokesman for the book. DraftKings was in a similar situation.

“It could get worse and probably will,” Johnny Avello, sportsbook director for DraftKings, said.

And he wasn’t even counting the potential cost of all the parlays. That’s where the really danger lied.

Savvy bettors spotted the opportunity to create correlated parlays early in the week. Some kept it simple, parlaying the underdog Jaguars and underdog Steelers on the money-line along with Chargers-Raiders ending in a tie. With Jacksonville a 14.5-point underdog to the Colts and Pittsburgh a 3.5-point underdog to the Ravens, odds on such parlays were longer than 600-1 at some shops.

Others got more creative, building same-game parlays around the game ending in a tie, like this beauty of a $1,000 four-teamer with 100-1 odds that a wise guy in New Jersey came up with:
• Raiders +4.5
• Chargers +4.5
• Yes on overtime
• Even total points scored

All four legs were guaranteed in a tie. The bettor told ESPN that he had put himself in position to win around $850,000 if the game had ended in a tie – and there were many more like him.

“Those same-game parlays are hard to calculate until the game goes” Avello said about the book’s liability. “You’re not really sure where you’re at it. It’s something to keep an eye on, but I wouldn’t stop people from betting them.”

Some bettors were convinced Chargers-Raiders would be an extremely low-scoring, conservative game. Some even gave credence to the the conspiracy theory that both teams would exchange kneel downs and the game would end 0-0.

“I saw someone propose the idea that theoretically they could just kneel for 70 minutes and end in a time and both go to the playoffs,” Sam Hoppen, a 28-year-old sports bettor from Chicago, said, who on Monday placed a $5 two-leg parlay with FanDuel on an outright win by the Jaguars and Chargers-Raiders ending in a tie at around 713-1.

Hoppen admitted Sunday afternoon that a festival of kneel-downs was far-fetched, but hadn’t given up on his bet that would’ve paid $3,565.

A few bettors got greedy, putting together larger parlays that needed the Chargers-Raiders game to be tied after every quarter at 4,374-1 odds.

“Parlay did not work,” a New Jersey bettor who put $165 on such a wager told ESPN on social media. “But [I] was very surprised the NFL allowed this opportunity to happen, meaning if games went a certain way, two teams can take a knee for 60 minutes plus OT and advance.”

In the end, we may never know just how much bookmakers were on the hook for on what surely would’ve been the most expensive tie in NFL betting history. Terms like “insolvency,” “ridiculous” and “Armageddon” were being thrown around by industry insiders in regards to the liability. Alas, the books will be able to keep the lights on for another day.

The Raiders’ Daniel Carlson made a 47-yard field goal on the last play of overtime for a 35-32 win, eliminating the Chargers from the playoffs and killing all those promising parlays that were tied to a tie.

• The Jaguars became only the fourth team in the Super Bowl era to win multiple games as a 14-point underdogs in the same season with their upset of the Colts on Sunday.

• The Borgata reported on Sunday taking a $480,000 bet on the Giants +3.5 in the first half against the Football Team. Washington’s Joey Slye made a 43-yard field goal with three seconds left in the second quarter, giving the Football Team a 6-0 lead at halftime.

• The SuperBook in Las Vegas offered a prop on no touchdowns being scored in the game at 500-1 and racked up a liability of “well into six figures” that included a $300 wager. “Bets were coming in all week, and they hit it right away,” John Murray, executive director of the SuperBook, told ESPN.

• Mobile sports betting launched in New York at 9 a.m. Saturday and according to a company that provides geolocation services to most U.S. sportsbooks, it’s already the biggest market in the nation.

5 questions with a bettor

Marco Piemonte, a 32-year-old car dealership owner and avid sports bettor in Illinois, needs Georgia to beat Alabama in the national championship game to complete a $30,000 five-leg parlay that would pay $1.2 million at sportsbook PointsBet.

It would be his second seven-figure score this football season, following the $1.3 million he won a $33,000 four-teamer he hit at DraftKings in October.

Piemonte, an avid sports bettor, spoke with ESPN this week about his options. The interview has been edited for brevity and clarity.

Q: Even with a cashout offer of $625,000 from PointsBet, you tweeted that you were letting your parlay ride. Why not hedge with a bet on Alabama?

A: I’ve been going back and forth. I even had this conversation with my wife last night. She was like, “You’ve never been the type to back down.” I said in another interview, ‘I’m 5-8. I can’t wussy out of it.’ You’ve got to compensate, and I compensate with the [guts] to continue and push forward.

Q: If successful, how will this rank among your biggest wins?

A: This one feels bigger than the last one [in October], because this is the national championship. This would be second-biggest win of my career.

Q: What’s the most you’ve lost on a single bet?

A: Single bet, largest loss was $300,000, on the national championship game last year. I still got nightmares about Nick Saban. Let’s hope I don’t have a whole new level of them.

Q: What percentage of your bets would you estimate are parlays compared to straight bets?

A: I’d say 25% [parlays]. My goal is to always put myself in a position to be ahead. So, if I do a parlay, outside of that parlay, I’m taking a couple of the games on their own, because I believe in those plays the most. And the parlay is a lottery tickets, and that’s kind of how I look at it.

Q: A Houston furniture store salesman, Jim “Mattress Mack” McIngvale often uses the betting market to hedge promotional giveaways. With your car dealerships, would you ever consider giving away free cars if a team won the Super Bowl, for example?

A: I know exactly who [Mattress Mack] is, and I would love to do that one day. I’d probably key it on a Chicago team, because we’re here outside of Chicago. I wish I would’ve done it with the Bulls. They were 60- or 70-1 odds before the season started. That would’ve been the one to do. But, yeah, I think one day I’m definitely going to do that. The car business is my career, a career I love. My dad (Al Piemonte) started it. I took over from my dad when he passed away in 2014. I’m sure he might laugh at me bringing sports betting into our world, but that’s okay.