Home » Lifestyle » Oh, So This Is How Daniel Craig Learned His Southern Accent For Knives Out? 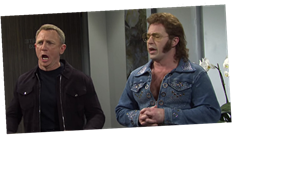 Oh, So This Is How Daniel Craig Learned His Southern Accent For Knives Out?

Daniel Craig was Saturday Night Live‘s guest host on March 8, and if you were hoping for a sketch about his Southern cadence in the film Knives Out, you weren’t disappointed. In the skit “Accent Coach,” the British actor shows up to the movie’s rehearsal and tries to nail his Southern drawl. He brings in an instructor (Beck Bennett) to assist him, but it becomes clear that the so-called tutor has never been to the South . . . or even heard anyone from the region talk, for that matter. After a few dramatic attempts at sounding like someone from Arkansas and Alabama, things get a bit messy. Maybe Craig learned his Southern twang by doing the exact opposite of what his coach said? Yeah, let’s go with that. Watch Craig try his hand at embodying Detective Blanc in the video above!