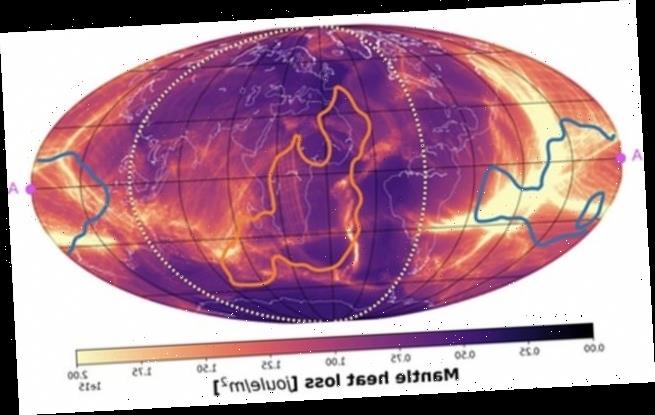 One half of Earth is rapidly getting COLDER than the other

One half of Earth is rapidly getting COLDER than the other: Side containing the Pacific loses more heat due to the distribution of the continental land masses, study finds

One half of Earth is cooling faster than the other, researchers have discovered.

Scientists believe the discrepancy is because the Pacific hemisphere has been covered with more ocean than the other half for the last 400 million years and land is a better insulator than water. 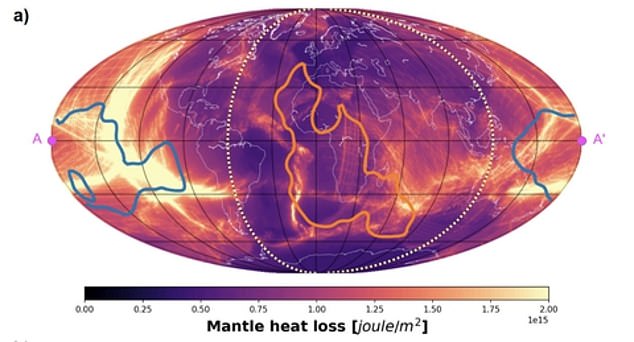 Scientists from the University of Oslo split the globe in half down the 60 degree longitude line, not the Prime Meridian.

Their divide goes through the Atlantic Ocean and South America.

Two datasets were combined for the research, one looked at the amount of heat from Earth’s interior which was flowing through the crust and the other tracked the movement of continents over millions of years.

The first revealed oceanic crust is a worse insulator than continental crust and, as a result of this, most of the heat the Earth loses dissipates through the oceans.

‘Our thermal budget for the mantle indicates that 149 Kelvin per billion years of cooling occurred over this period [since the mid‐Paleozoic around 400million years ago], consistent with geochemical estimates of mantle cooling for the past one billion years,’ the researchers write in their study.

‘Our analysis also suggests sustained rapid cooling of the Pacific mantle hemisphere, which may have cooled ∼50 Kelvin more than its African counterpart since 400million years ago.’

Earth is continuously cooling and will eventually become a frigid, lifeless rock, much like Mars.

But understanding how this is happening and has been happening historically has proved difficult.

Previous studied have only been able to gather data ating back 240million years, but the new study, published in  Geophysical Research Letters, goes back almost twice as far, to 400million years ago, before dinosaurs had evolved.

At this point in prehistory, the layout of the continents was very different to what it is today and was dominated by supercontinents, like Pangea.

Pangea started breaking up around 200 million years ago and led to the current distribution of Earth’s land mass. 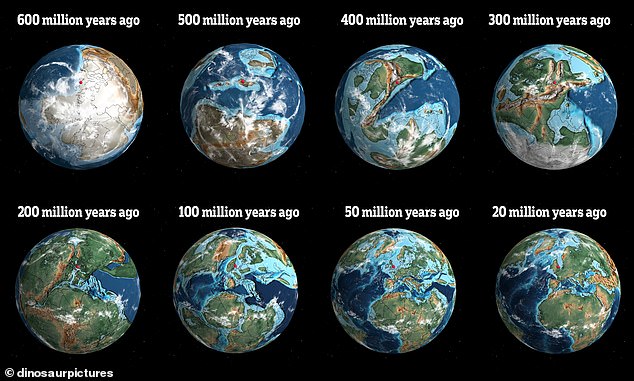 Pictured, heat loss from Earth’s mantle through time, computed with the world split into two hemispheres along 60° longitude

The movement which leads to this migration is still occuring, and Earth’s crust continues to drift a tiny amount every day.

This is due to the fact Earth’s magma swirls around via convection and the crust which sits atop it therefore moves in the direction of the molten flow.

As the red hot liquid interior sloshes around it also generates the planet’s magnetic field and gravity.

Data on this slow but consistent process revealed the Pacific half was originally hotter and is now cooling quicker.

But now, with Europe, Asia and Africa all located on one half of the world, and water making up much of the Pacific hemisphere, the global cooling is lopsided.

AN interactive tool developed by a palaeontologist lets you see where your hometown would have been on the Earth over the past 750 million years.

The map tracks a changing world, from glacier covered continents, through the global continent of Pangea, and on to the Earth we know today.

Webster created it as a way of helping people learn more about the world they live on and how continental drift has changed the planet over eons.

Webster said the goal was to show complicated scientific data in an easy-to-use way that teachers, parents or anyone interested int he history of Earth could use.

Browsing the history of the planet using the app shows that Florida was once submerged and the US was split by a shallow sea.

You can try the tool out for yourself on the Dinosaur Pictures website.