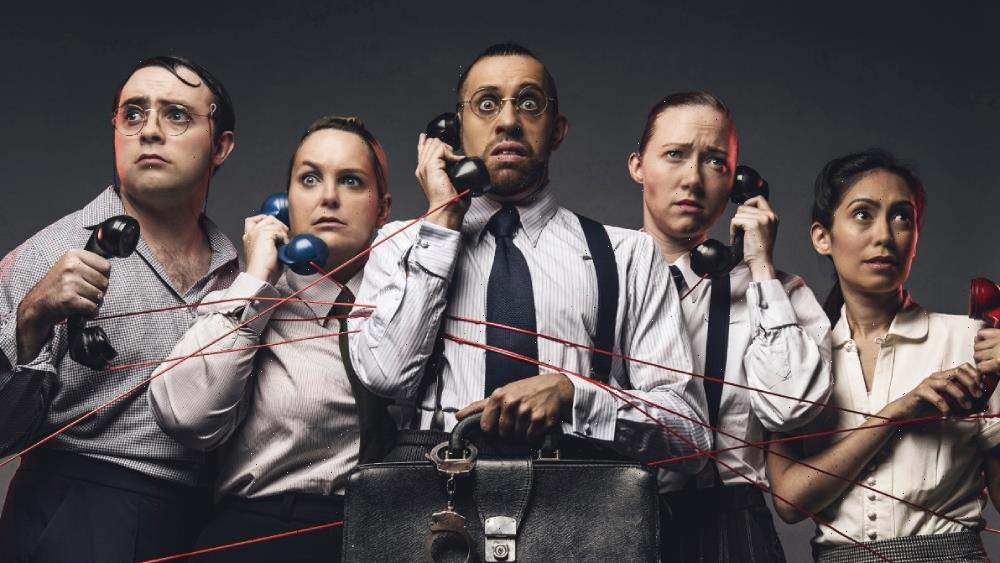 Is the quite splendid “Operation Mincemeat” ridiculously clever or cleverly ridiculous? Both. Making a song-n-dance show out of a real-life, stiff-upper-lip, British World War II intelligence operation sounds like a mad idea until you hear the bonkers details of the actual story. Now running at Southwark Playhouse in London, this is the musical you didn’t know you needed — until you see the expert cast of five embracing and racing through a clutch of preposterous yet endearing characters and musical styles, telling a story with delicious precision. Set firmly in the past, this is a little show with a very big future.

The story of a stolen corpse masquerading as a fine, upstanding RAF pilot carrying a briefcase full of fake top-secret information and outwitting the dastardly Germans is true in every hare-brained detail. The astonishing episode spawned a book by one of its participants which was made into a 1956 film “The Man Who Never Was,” a BBC TV documentary, a book by Ben McIntyre and John Madden’s glamorously cast upcoming movie of the same name. But I’d lay money that none of those match this show’s gloriously tasteless second-act opener, in which the Nazis dance a hip-hop number including the deathless lyric “Step to the left, lurch to the far-right.”

With little but five telephones and three multi-purpose boxes, we’re immediately sprung into the heart of MI5, the British security service, where upper-class men and put-upon secretaries alike are trying desperately to come up with a plan to foil the enemy and save the nation. In director Donnacadh O’Briain lickety-split production, the characters are etched in seconds — a colonel is gruff, a secretary is prim — but these are intentional cliches, brilliantly undercut by the deftness of the writing and the often gender-swapped casting.

Once the plan is greenlit, the office rushes into action with everyone on board — and that includes a real-life officer and wannabe novelist by the name of Ian Fleming. Yes, that Ian Fleming, the man who went on to create James Bond.

Composer Felix Hagan (on keyboards in the four-piece band) supplies the cast with everything from “Hamilton”-esque rap to jazz hands, via a tango number and a sea-shanty, to tell the ludicrously enjoyable story. Thought you’d never see an ensemble number in top hat and tails about a celebrity coroner? Think again.

Much of the show’s pleasure is down to its scale. Watching the cast leap in and out of multiple roles at breakneck speed — often mid-scene via the tiniest of comic costume changes — helps fire the delight of watching it. And the effectiveness of the production is down to its simplicity.

Helen Coyston’s design is ideally economic, with not a wasted surface or prop, and choreographer Jenny Arnold consistently springs tiny delights and surprises. She’s aided and abetted by lighting designer Sherry Coenen, who cunningly uses handheld flashlights to allow the cast to switch instantly mid-number back and forth between dancing Nazis and a group of submariners.

The chief surprise of the show is its unexpected depth. There are smart sexual politics at play, with the wartime role of women and male behavior examined via a young secretary (Claire-Marie Hall), whose ingenuity is seen as being at odds with her official role of making tea for the men.

More strikingly still, while Jak Malone gives the audience a whale of a time as the singing-and-dancing coroner, he takes them into the palm of his hand as Hester, the senior secretary who, drafted in to help create the backstory for the dead officer, gently reveals her loss in the previous war. It’s a hallmark of the production as whole that a man playing a repressed woman not only avoids every possible cheap laugh but instead holds the audience spellbound by the tenderness of the portrayal.

The show is now on its third short engagement, during which things have been tightened and strengthened. The company knows it’s on to a winner and there are moments where the cast teeter on the edge of overplaying its hand, but taking things down just a notch will solve that.

A grand-scale production would ruin the intimacy of this madcap musical. Like “The 39 Steps,” this delight proves that small is not only beautiful: It also has the potential for huge success.

Boxycharm Vs Birchbox: Which Beauty Box Is Better?
Recent Posts