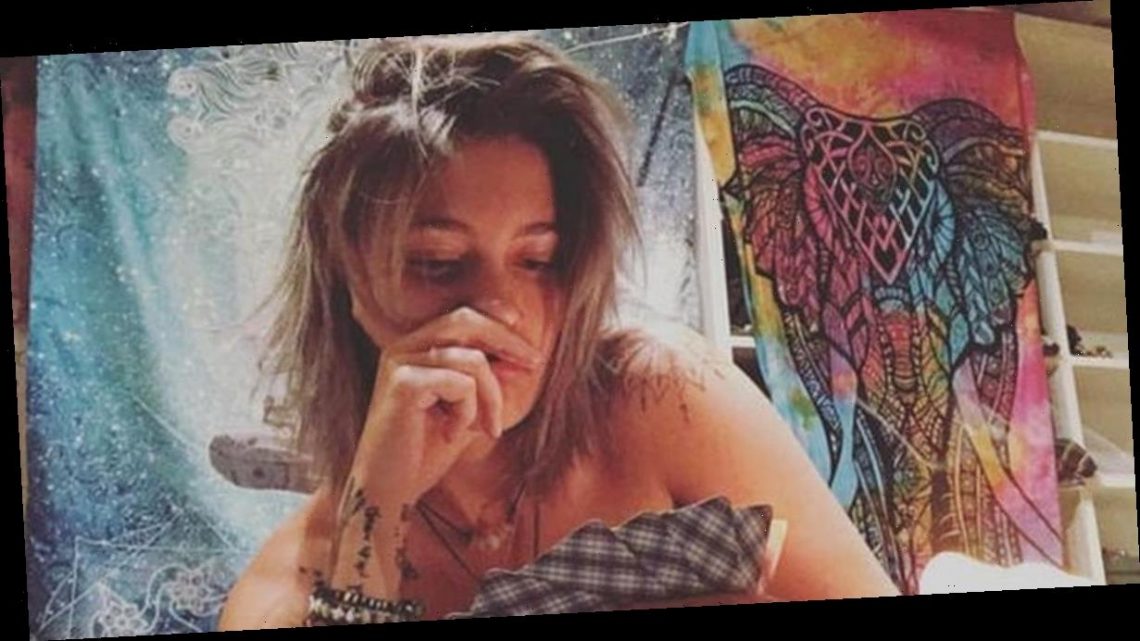 Paris, who is now a successful online influencer didn't ultimately go looking for fame, in fact much like her pop icon father the showbiz world just seemed to find her.

The bombshell was welcomed into the world on April 3rd 1998, by her two parents Michael and his wife at-the-time Debbie Rowe.

Debbie gave birth two of the Thriller hitmaker's children before the pair later filed for divorce in 1999.

After a life filled with drama following her father's tragic death and her mum's devastating battle with breast cancer in 2016, it's no wonder Paris often likes to let loose.

The Soundflowers front-woman certainly isn't shy when it comes to flaunting her curves in anything scantily-clad.

Paris Jackson took to Instagram to flaunt a fabulous glitzy gown that hadn't yet been adjusted to fit.

The pop legend's daughter had been so excited to show it off that she couldn't even wait until it was tailored.

Clutching at her breasts, she managed to keep to avoid a red faced wardrobe malfunction as she clutched at the material.

Speaking as part of the interview with Vogue, she said: "This is my second dress and I feel like a princess.

"I never actually get to go to prom, I skipped it to go see Notalica so err this feels nice.

"I would want my prom dress to look like this."

When it comes to inking Paris has plenty situated all over her body and she isn't afraid to show off her artwork either.

The stunning model had endured a lengthy session with a tattoo expert to create a very bohemian style marking that travelled from her neck to her belly button.

Paris was so excited to show of the results, she took to social media ditching and ditched her bra in the process.

Flashing the flesh, she posed with her arms held up high on her head as she showcased her newest creation.

Fortunately, she did use two strategically placed emojis to conceal her modesty.

In 2017 Paris stunned onlookers as she wowed on the red carpet for the pre-Grammy's Gala.

Turning up the heat, she rocked a deep plunging dress that demanded attention.

The online model certainly knows how to turn heads and she definitely did just that in the sheer patterned and floor length gown.

Adding sass, she stunned with short bobbed locks that had been highlighted a platinum blonde colour.

Michael Jackson's daughter certainly proved to worldwide spectators that she was all grown up when she attended the Oscars in 2018.

She clearly wasn't trying to make discreet entrance as she donned a spectacular lime green Versace gown that left little to the imagination.

The statement item boasted a deep cut neckline, enabling her to show off her most recent sternum inking in the process.

Paris stole the show, as she arrived at the Vanity Fair Oscars party in the stunning green sheer gown.

The musician flashed her neverending and model like legs underneath the transparent train that boasted a huge side slit.

Paris often likes to amaze and astound her legion of followers not only with a number of arty risqué reveals.

Ditching all of her clothes and seemingly all of her makeup, she roughed up her hair in the natural setting as the photographer captured her raw side.

Fortunately for the songstress, she had some playing cards to hand that she used to shield her modesty from view.

Accessorising, she used only abundance of bracelets along with her tattoos as she embraced her bare skin.