Job interviews are stressful enough without something major going wrong.

People from across the UK have taken to Reddit to reveal their worst interview experiences, from the boss telling a racist joke to being asked to rap about food poisoning.

The discussion began after a Reddit user revealed they were once asked to wear a sheep costume and act out a play for a job at a country park. 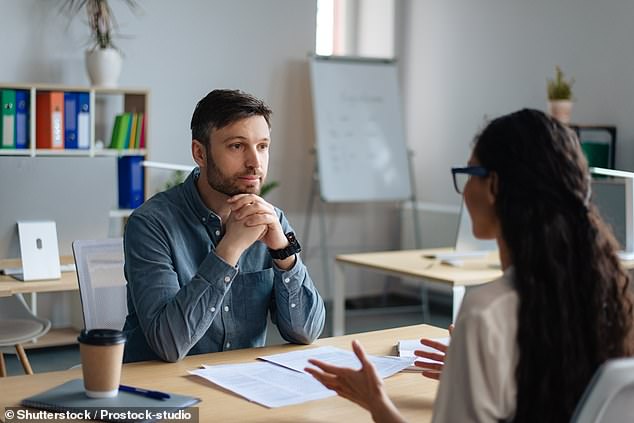 People from across the UK have taken to Reddit to reveal their worst interview experiences, from the boss telling a racist joke to being asked to rap about food poisoning. Stock image

Almost 100 people contributed to the discussion, both interviewers and interviewees.

One woman recalled how she had to send a jobseeker home because he had arrived drunk.

One person wrote: ‘I got interviewed at Toys R Us before and the woman interviewing me asked why I didn’t have a job for a year or so. I told her it was because my mother had died and my mind was a bit messed up at the time.

‘Her next question “how did your mother die?” I replied and told her it was a heart attack and she came out with, “Oh so it was a painful death then”.’

‘I left the interview there and then, and went to speak to her manager about what she said. I don’t know what happened after that, I’m assuming f*** all though.’

Another person claimed they once showed up to an interview at a car dealership with an additional 50 candidates, writing: ‘Was badly organised but we all went into the opening meeting, essentially they said how serious they were and the hours etc.

‘A number left after that right off the bat at break, then myself and a load of others got cut in the first round after doing some team building exercises. I was fine with that though once they said the house and stuff I was not gonna be taking the job.’

A third wrote: ‘Delivery driver for Iceland. Had to do all the sit in a circle and talk about yourself stuff, what animal would you be s****, build a tower with newspaper and sellotape b*******. Didn’t stay to the end.’

Another added: ‘I went to one of those at Alton Towers. Ended up writing a rap about food poisoning.’

Others blasted unprofessional interviewers, with one person claiming a panelist fell asleep and another saying the recruiter didn’t turn up.

One person wrote: ‘Saw an advert in the local paper for some customer service job. Was at uni so only needed a few hours so rang up and got the interview. Very quickly I realised it was a multi level marketing scam type job.

‘Worst bit after the “Sing us a song” bit was when the director told a racist joke and I could tell it was a test so didn’t laugh.

‘Wouldn’t have laughed anyway. Sat back in the waiting area his assistant came over and told me they didn’t think I’d fit the culture so I was invited to leave.’

Another wrote: ‘My experience was an interviewer more than interviewee. My colleague burst out laughing at a candidate’s answer, so awkward and embarrassing.

‘Dealing with a drunk candidate was fun too. I just told him to go home.’

Got an old iPhone or iPad? It’s now worth way more than you might think