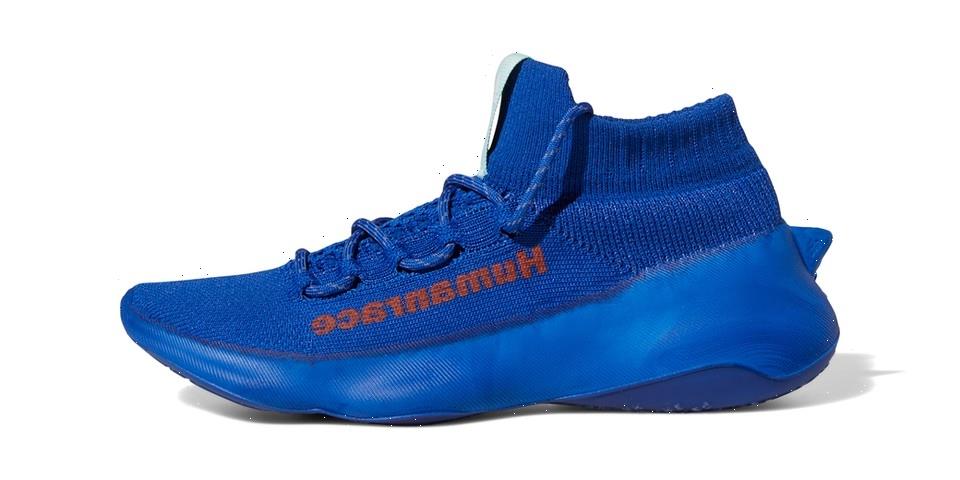 Though the first colorway to be revealed was a green-and-white friends and family pair, the first Humanrace Sičhona to actually release will be a “Team Royal Blue/Easy Coral/Clear Aqua” makeup. It’s constructed with a new “direct inject casting” method that enables the removal of unnecessary elements, merging the sock-like Primeknit upper directly to the anatomically molded, uniquely shaped TPU midsole. adidas’ Futurenatural technology supplies cushioning, and a Humanrace branded strike crosses the midfoot while further branding appears on the tongue tabs and insoles. Outsoles get in on the action too, featuring a computer-printed Humanrace typography pattern. “I chased the experience I remember feeling as a kid when I walked barefoot on grass, sand and rocks,” said Pharrell while discussing the shoe’s design. “Feeling the texture, the temperature, the moisture … that primal sense of freedom was a north star objective with this project.”

The shoe’s launch is accompanied by an “I am Dakota, We are Dakota” campaign that was directed by Josué Rivas — an Indigenous creator who specializes in visual storytelling and education — and also stars multiple tribe members. Even the shoe’s name is a tribute to the Dakota people: Sičhona borrows from an Indigenous phrase that means “connecting to the earth,” the Dakota way of saying “barefoot.” Furthering the projects’s ethos, Pharrell and adidas Originals are helping to fund a 10kW solar array training and demonstration project for the youth of Standing Rock.

Australia’s inaction the moral downfall of us all