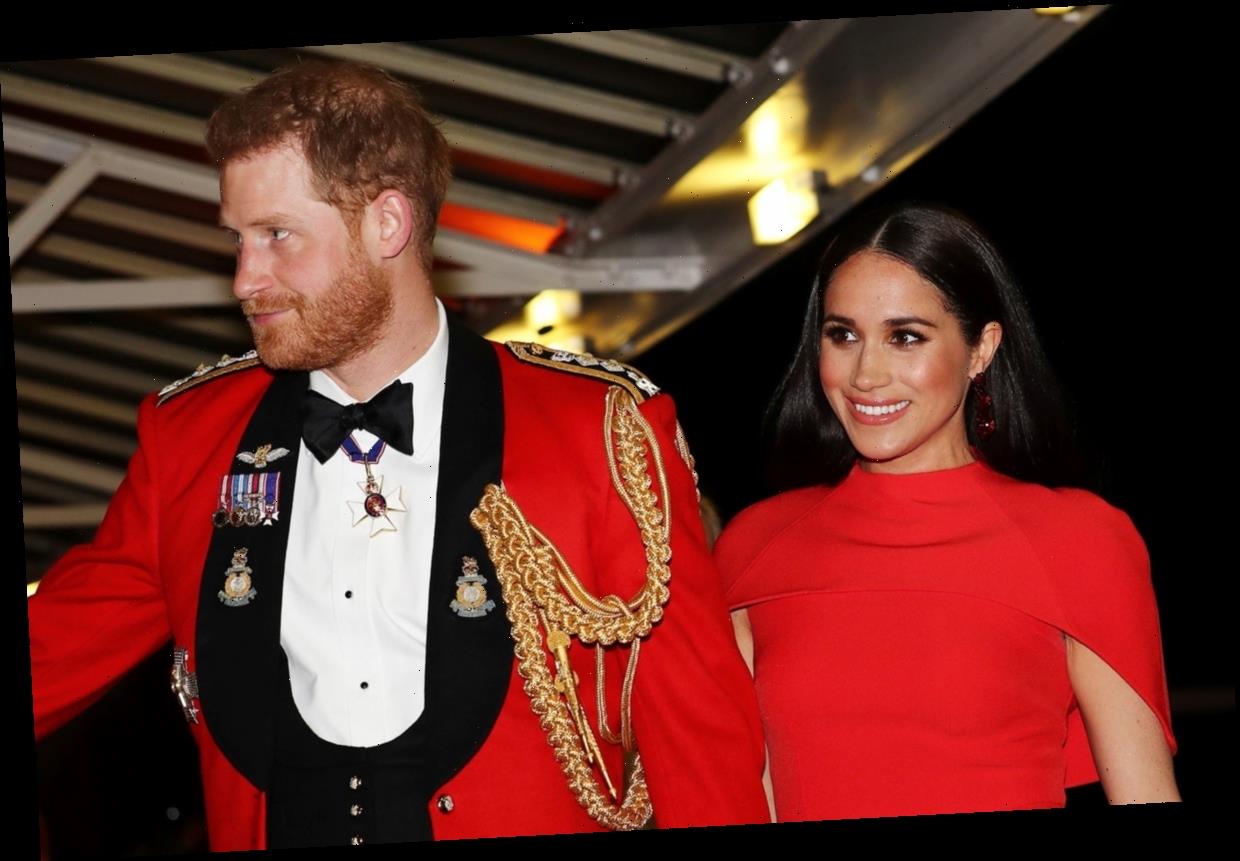 The Duke and Duchess of Sussex may not be senior royals for much longer, but they’re not going out without a bang. The photos from Meghan and Harry’s night at the Mountbatten Music Festival showcase the new parents enjoying one of their final royal events before they officially step down at the end of March. On Saturday, March 7, Harry stepped out in his Marines uniform for the event at the Royal Albert Hall in London, while Meghan wore an elegant, red cape dress to match.

According to the Sussex Royal Instagram account, the Mountbatten Music Festival — which is held annually — marked "the 75th anniversary of the end of World War II and the 80th anniversary of the formation of Britain’s Commandos." The festival also raises money for The Royal Marines Charity and CLIC Sargent. It’s clearly a cause close to Harry’s heart, as he was named Captain General of the Royal Marines back in 2017, though it’s unclear whether or not Harry will retain the title once he steps down from his role as a senior royal.

After they arrived at the event, The Daily Mail‘s Royal Correspondent Rebecca English shared photos on Twitter of the couple meeting with members of the military in the Hall’s lobby. In one of the photos, before joining the receiving line, Harry and Meghan beam lovingly at one another before shaking hands and spending some time speaking with the members of the public in the receiving line.

The Mountbatten Music Festival is one of the first official engagements the couple have attended since announcing their decision to step down as senior royals back in January. In a joint statement at the time, Meghan and Harry explained that they hoped to "become financially independent, while continuing to fully support Her Majesty The Queen," and split time between the United Kingdom and Canada, which Meghan has considered to be her "second home" after moving there to work on Suits.

Since their last joint appearance in early January, Meghan and Harry have spent much of the past few months setting up their new home in North America with their 10-month-old son, Archie. Harry returned to the UK last week in order to attend an eco-tourism summit in Scotland, according to the Guardian. He and Meghan made their return to royal engagements on Thursday, March 5, when they attended the Endeavour Fund Awards, which honors sick and injured servicemen and women.

At the event, Harry gave a speech honoring those in the military and their commitment to serving their country, saying that "being able to serve Queen and Country is something we all are rightly proud of, and it never leaves us. Once served, always serving!" The duke — who served in the military for 10 years — also promised the servicemen and women in attendance that even though he is stepping down from his royal role, he will always support them in whatever ways he can.

"I feel lucky to be able to count myself as one of you; and am deeply proud to have served among you as Captain Wales,” Harry stated in his speech, per Marie Claire. "A lot of you tonight have told me you have my back, well I’m also here to tell you, I’ve always got yours."

Meghan and Harry have one more formal engagement before they step down on March 31, at which time they will give up their royal titles and no longer officially represent the Queen (though the agreement will be revisited and re-evaluated after a year). The couple will attend the Commonwealth Day Services on March 9, alongside the Duke and Duchess of Cambridge and the rest of the royal family.

What Is Charlamagne Tha God's Current Net Worth?