Scott Morrison should stop the blame game with states over hospital funding, the peak body for doctors says after the prime minister claimed any federal increase would be met by states cutting their funding.

As the Victorian budget on Tuesday included a $12 billion boost to public hospital funding, NSW Health Minister Brad Hazzard rejected Morrison’s claim that states would fail to meet their part of the bargain and called on both sides of federal politics to put “the health of the nation” first and lift hospital funding. 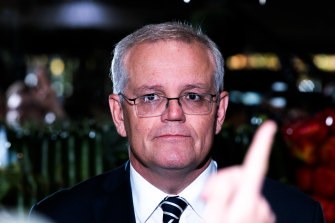 Scott Morrison is refusing to lift the cap on hospital spending.Credit:James Brickwood

“NSW would certainly not be seeking to reduce its contribution, because costs just keep escalating,” Hazzard told The Sydney Morning Herald and The Age on Tuesday after Morrison made the comment in a radio interview.

“No one would doubt the massive impact of inflation on goods and services over those three years,” he said.

State leaders have ramped up calls for whichever party wins the federal election to address the crisis unfolding in Australia’s hospitals, as patients wait years for surgery and are dying while waiting to be admitted to emergency departments in both NSW and Victoria.

“The state and federal governments need to sit down and have a grown-up discussion for a way to adequately fund health without the blame game,” Australian Medical Association Vice President Dr Chris Moy said.

Morrison defended his refusal to increase hospital funding on Tuesday, telling 3AW radio: “What we are talking about is just the Commonwealth paying more and the state government paying less.”

Asked about Victorian Premier Daniel Andrews’ push – along with all other states and territories – for the Commonwealth to lift its contribution, Morrison said: “It’s not clear the Victorian public would get anything more”.

But the Victorian budget, handed down on Tuesday, includes a $12 billion boost to public hospital funding, far exceeding the $1.5 billion estimated cost for the state to deliver its part of the new funding deal being sought.

Currently, each year the Commonwealth pays what it paid the previous year plus 45 per cent of the growth in state and territory hospital costs, capped at 6.5 per cent growth.

All states and territories have written to federal Health Minister Greg Hunt seeking a 50/50 split and for the cap to be abolished, a change that would cost the states a combined $5 billion and the Commonwealth an extra $20.5 billion.

Moy said the federal government had long used the claim that states and territories would lower their funding to defend its refusal to raise its contribution.

“That has actually undermined real increases in funding and health in the longer term,” Moy said.

Labor leader Anthony Albanese has promised to sit down and negotiate with premiers, but has not committed to increasing hospital funding, warning of budgetary restraints.

AMA President Dr Omar Khorshid said it was the next prime minister’s job to “tackle the hospital crisis” and accused Morrison of using “easy spin to blame the state”.

“By ruling out a new funding deal for our hospitals, the PM is saying that it is okay our hospitals are ramped with ambulances. He is saying it is okay that EDs are overflowing, that people are suffering in pain, or worse, dying,” Khorshid said.

“There is no excuse here. States would not seek to reduce their contributions, as has been claimed today by the prime minister.”

“The states understand that if the Commonwealth stumps up some extra cash, that that has to be put into health, directly into hospitals and not into their own state government coffers.”

3AW host Neil Mitchell pushed Morrison on the issue, saying: “People are dying. We don’t care if [the tax money] is state or federal. Why can’t a deal be negotiated where you say, ‘OK, we’ll give you 50-50, but we increase the overall bill?’”

Morrison said his government had already increased its national spending on public hospitals, allocating $27 billion this financial year, forecast to rise to $32.7 billion by 2025-26.

“If the states had matched the increase in the funding we’ve been providing the public hospitals, there would be even more money available,” he said.

Mitchell referenced former Labor prime minister Kevin Rudd’s 2007 pledge that on health, “the buck stops with me”, asking Morrison: “Where does the buck stop on health now?”

The prime minister said “with public hospitals, it stops with the state governments”, while Medicare and mental health were “a shared responsibility” and the federal government was responsible for aged care and the NDIS.

Cut through the noise of the federal election campaign with news, views and expert analysis from Jacqueline Maley. Sign up to our Australia Votes 2022 newsletter here.