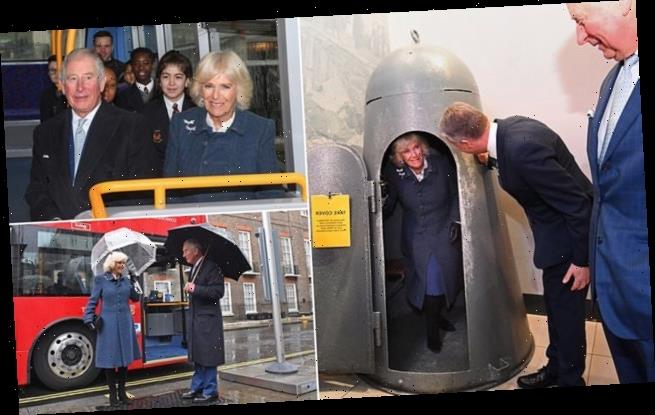 Prince Charles and the Duchess of Cornwall visit the Transport Museum

‘I’m self-isolating!’ The Duchess of Cornwall jokes with Prince Charles about coronavirus by hopping into an air-raid shelter during a visit to the London Transport Museum

The Duchess of Cornwall joked she was ‘self-isolating’ during a visit to the Transport Museum this afternoon in an apparent quip on the coronavirus.

Prince Charles, 71, and Camilla, 72, did not let the weather dampen their spirits as they took an eco-friendly double-decker bus to the Transport Museum in London this afternoon.

The royals toured the event with London Mayor Sadiq Khan to mark the 20th anniversary of Transport for London, which was introduced by the Greater London Authority Act in 2019 and took effect in 2000.

Hopping into a one-person air raid shelter during a tour she took with Prince Charles, to mark the 20th anniversary of Transport for London, Camilla joked: ‘I am self-isolating.’ 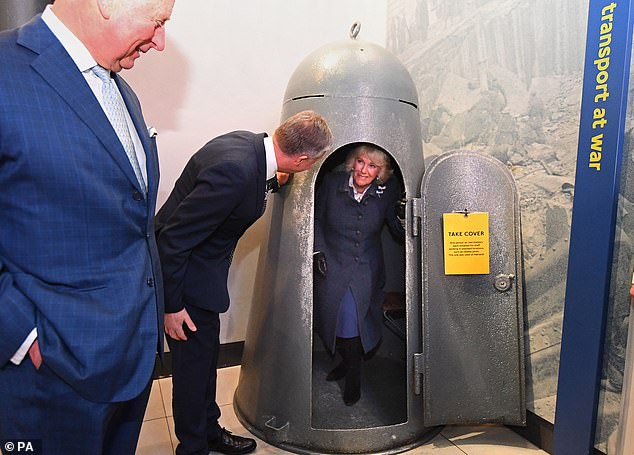 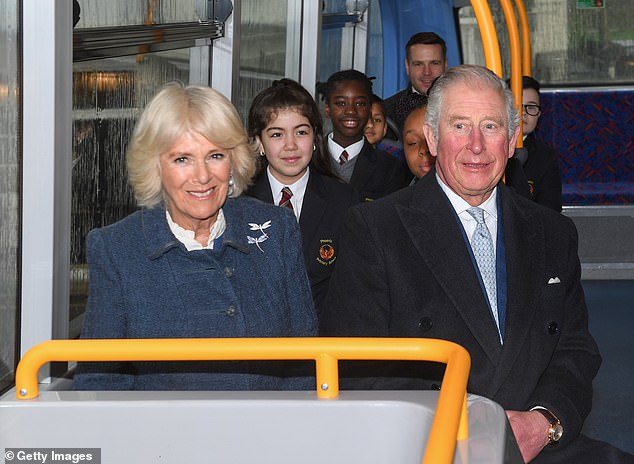 The duchess wore gloves during the engagement but Charles did not, and the couple shook hands with some of those they met.

It comes a day after the Queen unusually wore large white gloves at a Buckingham Palace investiture for what was believed to be the first time.

The Government has advised thorough hand-washing as efforts continue to stop the spread of the disease.

Charles and Camilla had enjoyed a ride to the museum on an electric bus, boarding the red double decker at a specially installed temporary bus stop outside Clarence House. 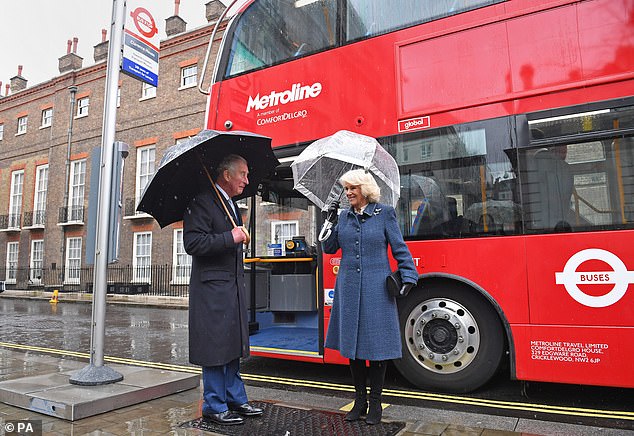 The Prince of Wales, 71, and the Duchess of Cornwall, 72, are visiting the Transport London Museum this afternoon to mark Transport for London’s 20th anniversary (pictured waiting to hop on a new electric double-decker bus to go to the venue) 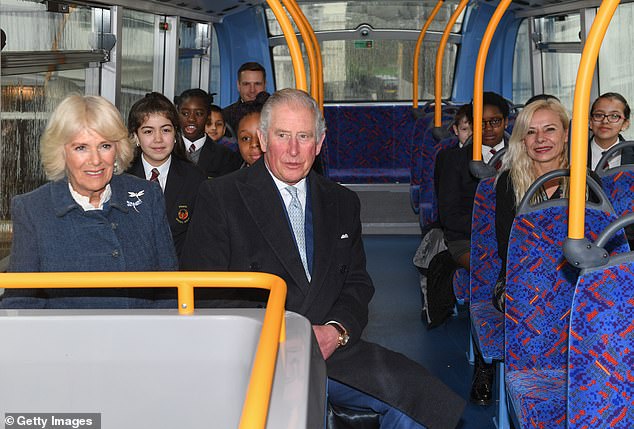 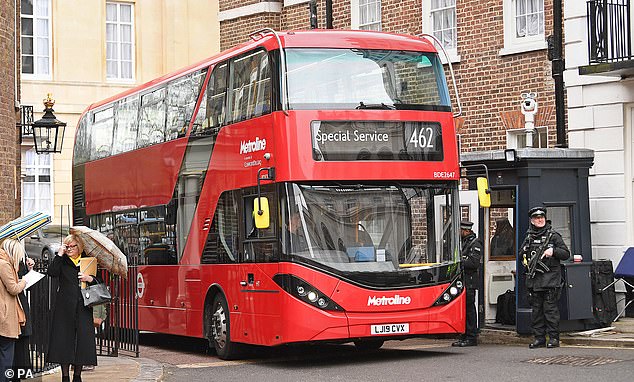 Onboard the special service! Charles and Camilla will tour the museum, which contains a collection of more than 500,000 items this afternoon 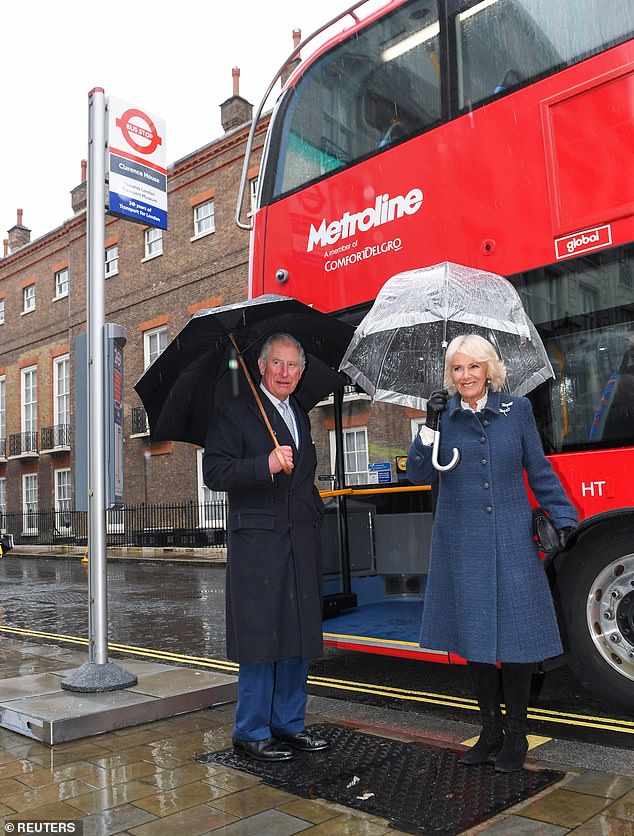 In spite of the rain, Camilla was all smiles as Charles and her awaiting their bus earlier this afternoon (pictured) 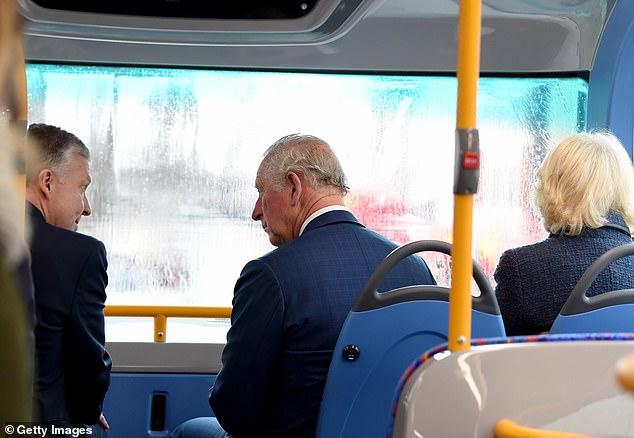 Sheltered from the rain on the bus’s upper-deck, Charles and Camilla exchanged pleasantries with Transport for London Commissioner Mike Brown (left

Wearing a dark grey coat over a stylish blue suit, Prince Charles looked relaxed as he waited for his transport.

Wrapped up in a cornflower blue winter coat and covering from the rain with a see-through white umbrella, Camilla smiled widely, ready to ride around London in the new bus.

She dressed stylishly yet sensibly for the weather, covering up with a pair of leather gloves with black swede boots and a clutch bag also in black.

The lapel of her coat revealed a white blouse with long sleeves while the slit of her coat showed she was wearing a blue midi skirt.

Seated at the front of the top deck, they took in views of central London which were somewhat obscured by the rain. 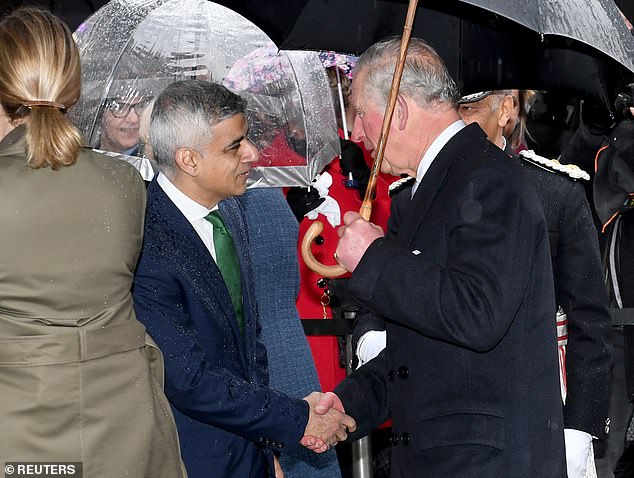 Prince Charles warmly shook hands with the Mayor of London Sadiq Khan, who was waiting to welcome him at the museum 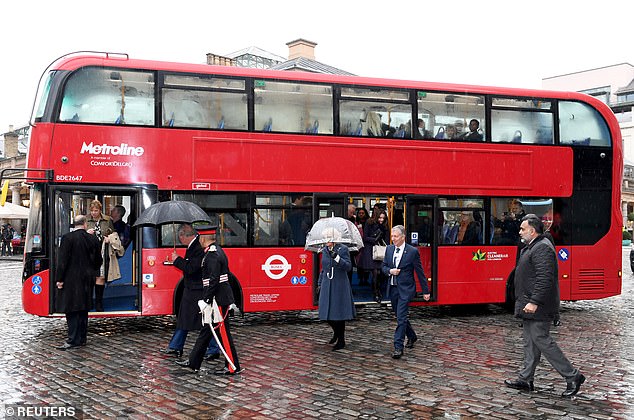 Once at the museum, officials respectfully waiting until Charles and Camilla had alighted the bus to exit it 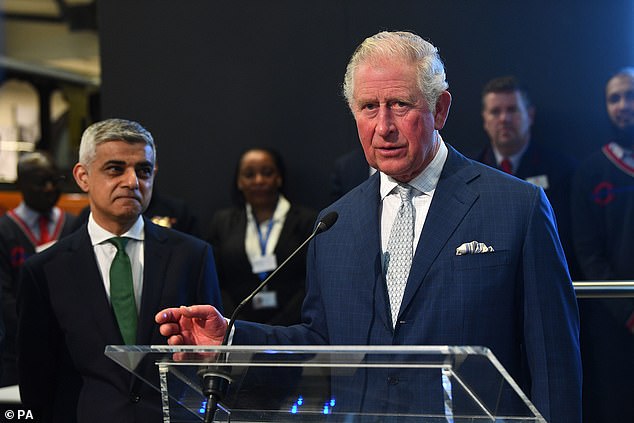 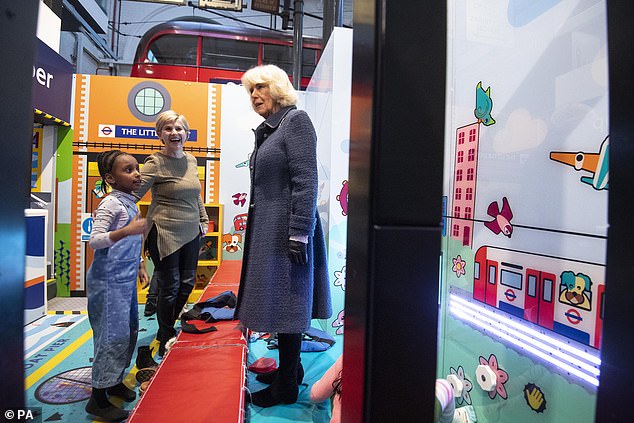 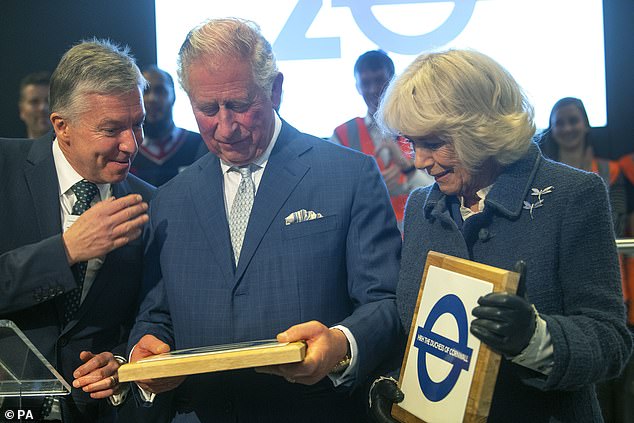 The environmentally friendly bus, accompanied by a police escort, took the couple, TfL staff and a group of schoolchildren on the 10-minute journey down Pall Mall and past Trafalgar Square to Covent Garden.

During a tour of the museum, the couple sat in a 1938 Tube carriage and recorded a message which will be played on the capital’s transport network at some stage later in the year.

They also met TfL apprentices and staff who have pioneered environmental and mental health schemes in the workplace, as well as crisis response staff, as they walked around the building with Mayor of London Sadiq Khan.

At one stage Camilla, who chatted to school pupils in a children’s section of the museum, sat down in the soft play area as the young people showed her the various activities on offer.

One little girl said she had been learning about environmental issues in school, telling Camilla: ‘Antarctica’s melting.’

Before unveiling a plaque to commemorate TfL’s two decades, Charles made a short speech praising the ‘pure genius’ of how the operation works.

He told the various staff gathered: ‘It is remarkable how you do it, how you manage to make such an immense operation work so well. 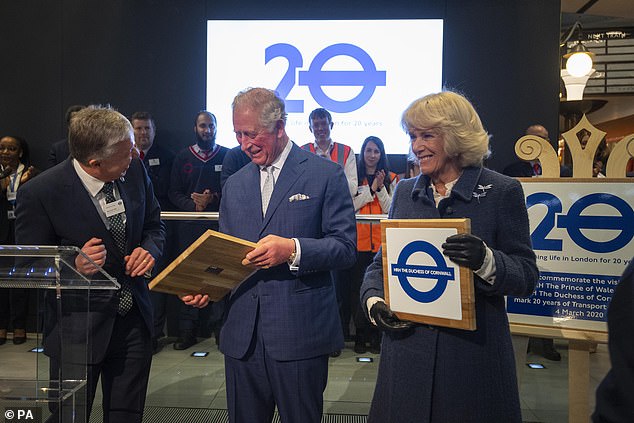 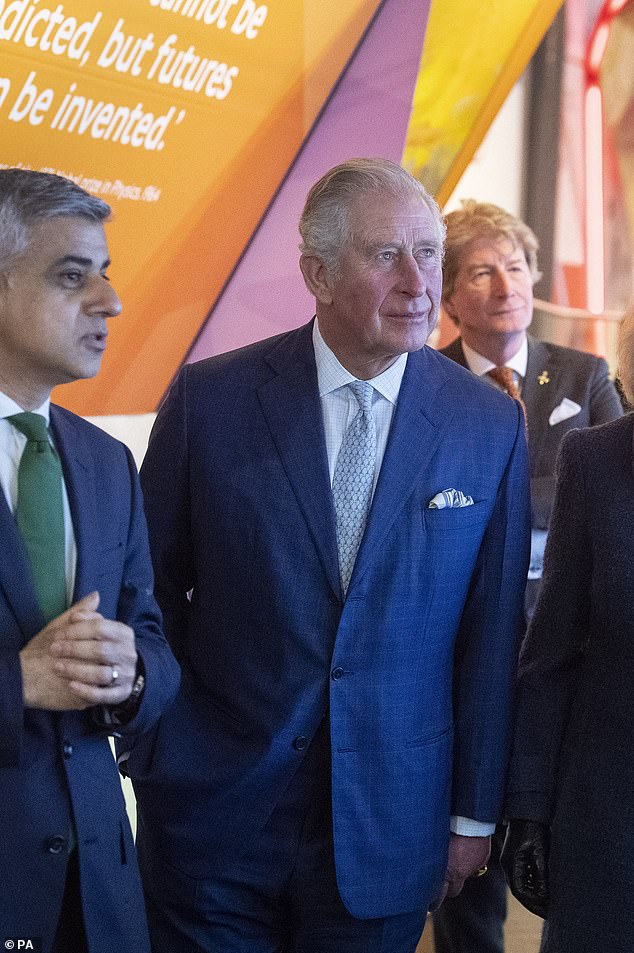 Dressed in a stylish electric blue suit, Charles listened intently to Sadiq Khan as he talked him through the visit 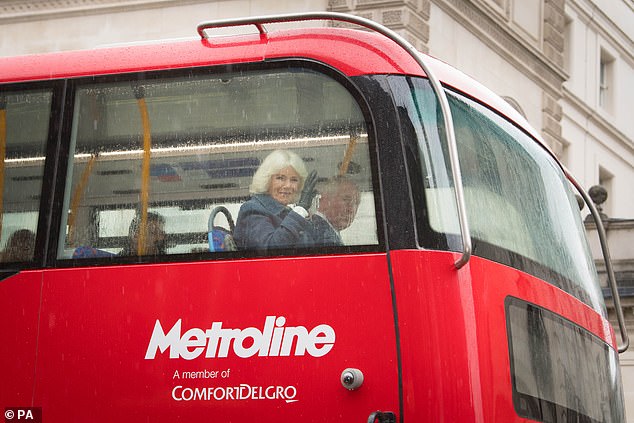 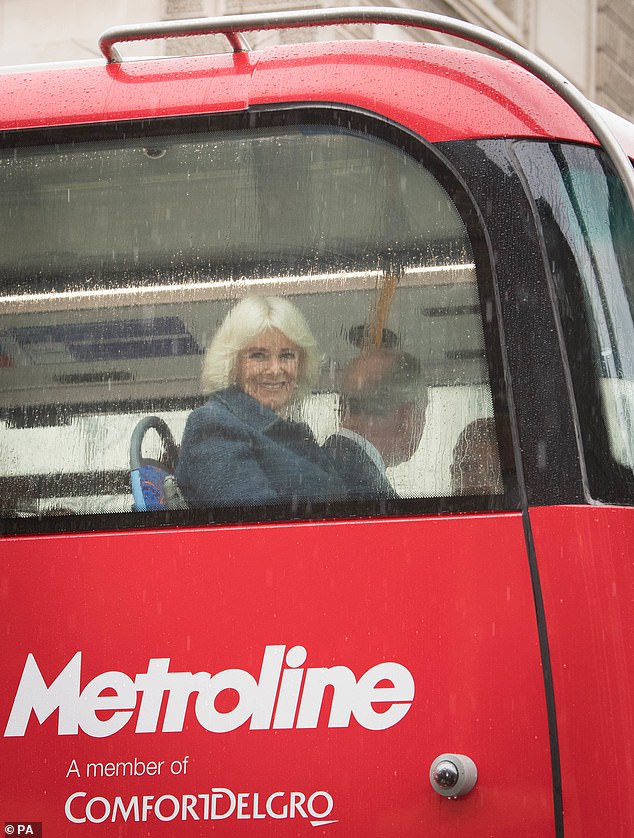 ‘And how you also manage to do new projects, upgrading of stations and lines and everything else at the same time as providing the service to the public.

‘It is, in my opinion, pure genius how you do it.’

The museum’s collection includes 500,000 items dedicated to the innovations in British urban transport, and dates back to the 1920s.

It includes everything from locomotives which powered the world’s first underground railway, to one of the most important collections of 20th century poster art. 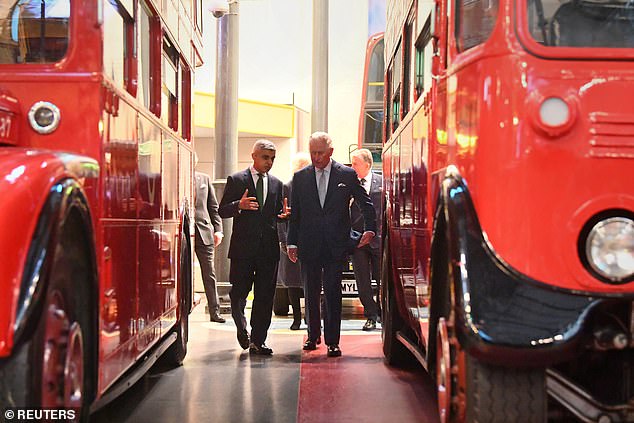 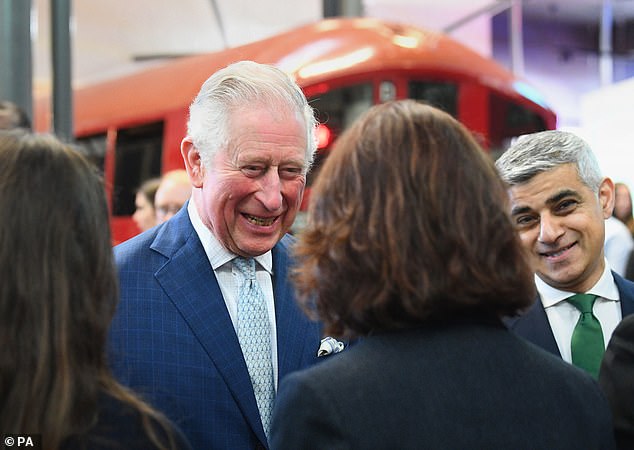 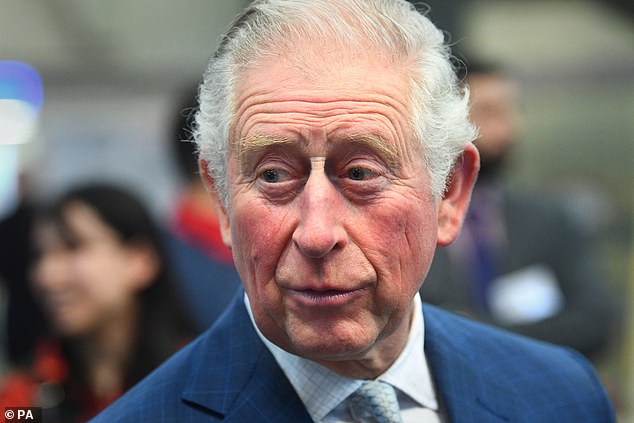 The royal took the time to speak to other guests. The event celebrates the 20th anniversary of TfL, which was introduced in 2000 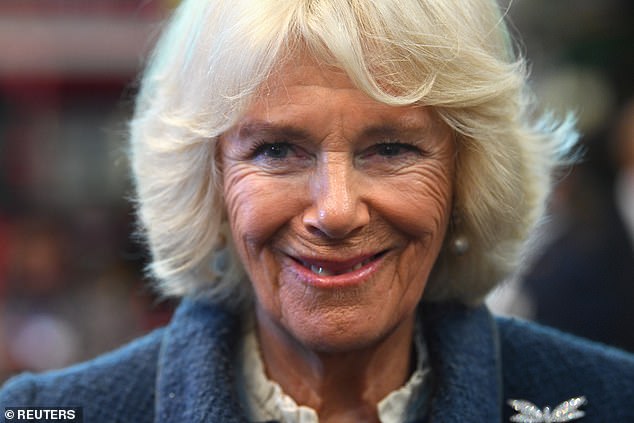 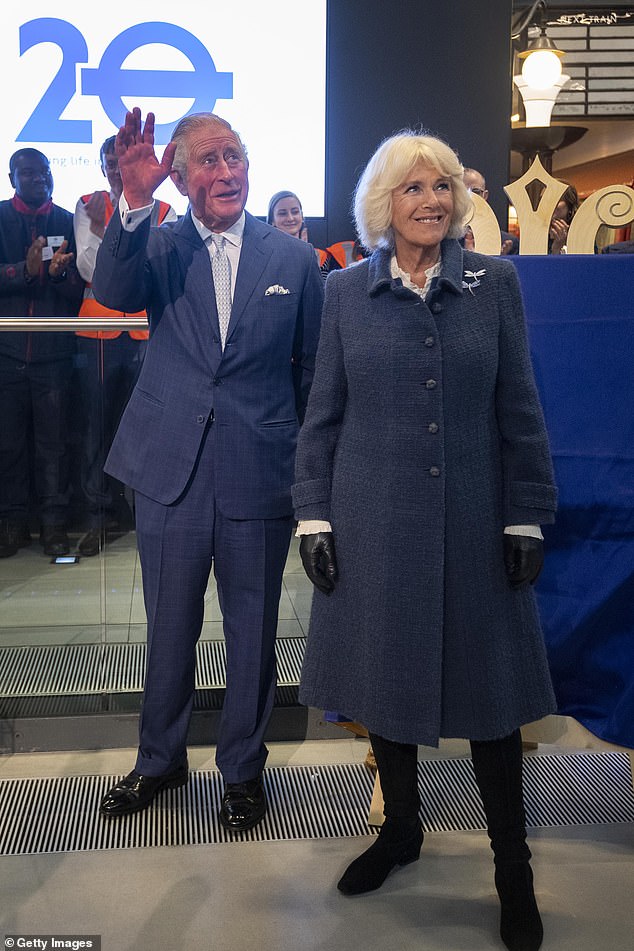 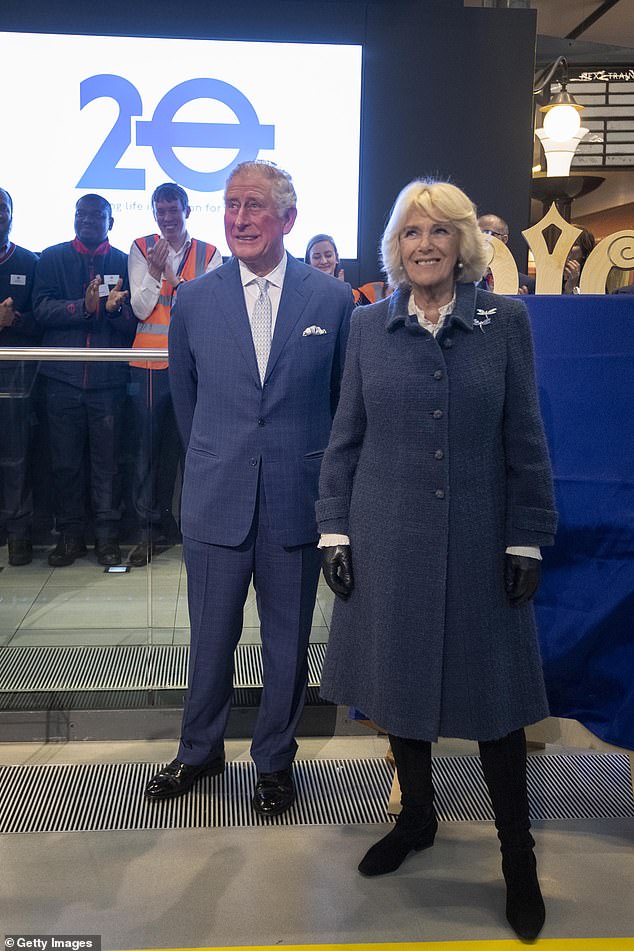 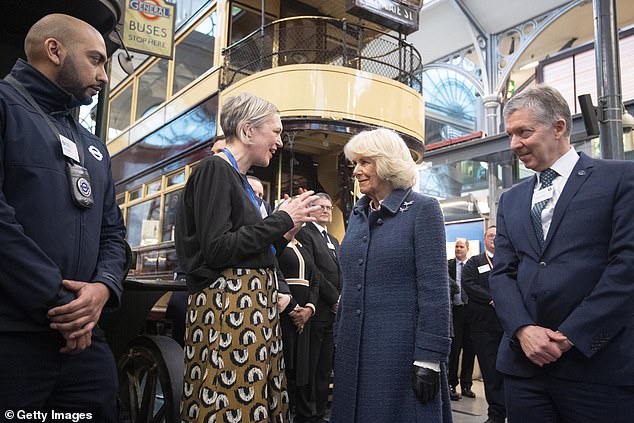 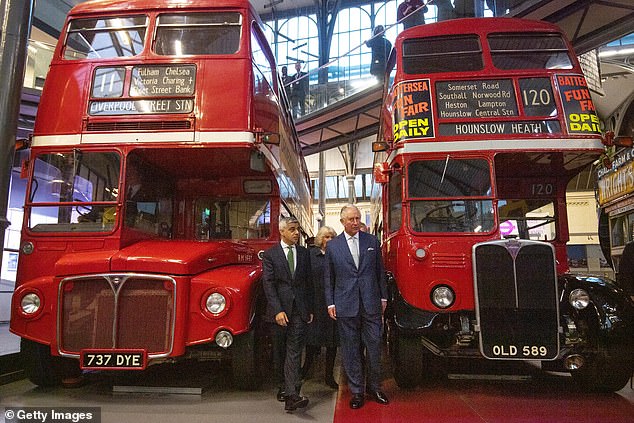 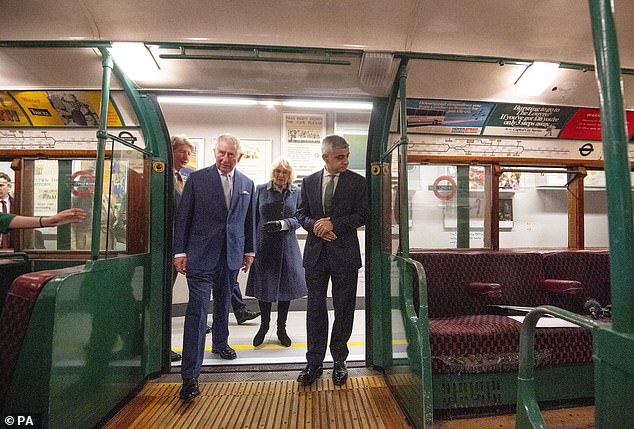