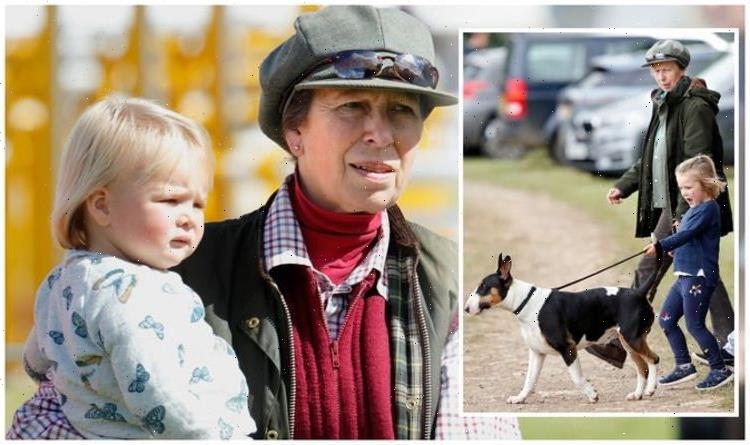 Princess Anne, 71, is the Queen’s only daughter and one of the hardest working members of the Royal Family. In 1973 she tied the knot with Captain Mark Phillips in Westminster Abbey, the first of the Queen’s children to get married. Anne welcomed Peter Phillips in 1977, the Queen’s eldest grandchild, followed by Zara Tindall in 1981.

The now-divorced couple have two daughters, Savannah, 11 and Isla, nine.

Princess Anne is therefore the grandmother of Savannah, Isla, Mia, Lena and Lucas.

They are also the great-grandchildren of Queen Elizabeth.

But what is the Princess Royal like as a grandmother?

Judi James, a body language expert, spoke exclusively to Express.co.uk about Anne’s techniques as a grandmother.

She said: “Princess Anne clearly had to adopt a more formal approach to parenting with Zara and her brother when she was in the public eye.

“But her behaviour with her grandchildren looks almost as relaxed and fun-loving as her daughter’s.

“Her facial expressions might sometimes suggest she can be a rather stern granny.

“But it’s also clear her playful side is triggered with the young children.

“She looks doting and delighted to spend time in their company.”

Angela Karanja, an Adolescent Psychologist and founder of Raising Remarkable Teenagers also spoke exclusively to Express.co.uk about the Princess Royal.

She said: “I feel Princess Anne would be that grandmother that encourages her grandchildren to reach for the stars and not hold back.

“She would say they don’t have to follow a predetermined route, and this doesn’t make them rebellious, a term that most people use to describe children or people who do not follow what was expected.

“Just as Princess Anne has in her own relationships and decisions – such as not giving her children royal titles.

“It’s evident that even though she was born into royalty, she refused to keep pace with her companions.

“She certainly was hearing a different drum and followed that.

“Princess Anne has clearly taught her daughter Zara the same and would therefore relay this to her grandchildren.”