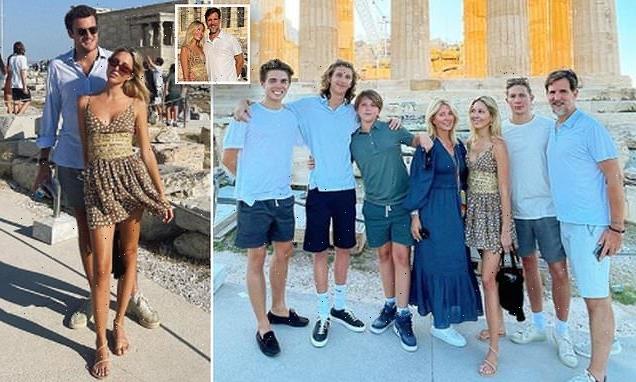 A royal family holiday! Princess Olympia of Greece is joined by British boyfriend Peregrine Pearson – heir to the Cowdray fortune – as she jets off to Athens with her brothers and parents

Princess Olympia of Greece has jetted off to Athens with her family and her handsome British aristo beau.

The 24-year-old socialite, who grew up in Chelsea and is Prince Charles’s goddaughter, took in the sights with her four brothers and their parents, Crown Prince Pavlos and Princess Marie-Chantal of Greece.

Joining them is her dashing boyfriend Peregrine Pearson, son and heir of the 4th Viscount Cowdray, whose family has a reputed £224million fortune.

Perry’s father owns a significant chunk of the Pearson media empire as well as the 16,500-acre West Sussex estate which is home to Cowdray Park polo club, where Princes William and Harry have played. 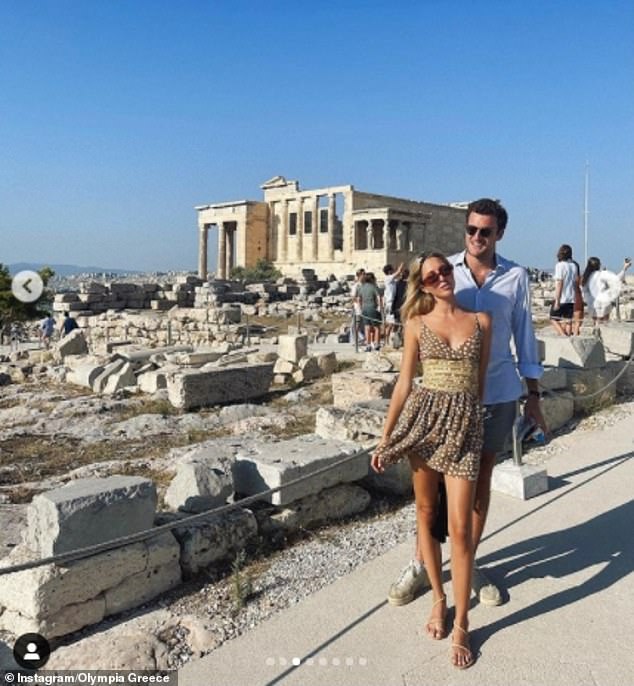 Loved up: Princess Olympia with her dashing boyfriend Peregrine Pearson, son and heir of the 4th Viscount Cowdray, whose family has a reputed £224million fortune 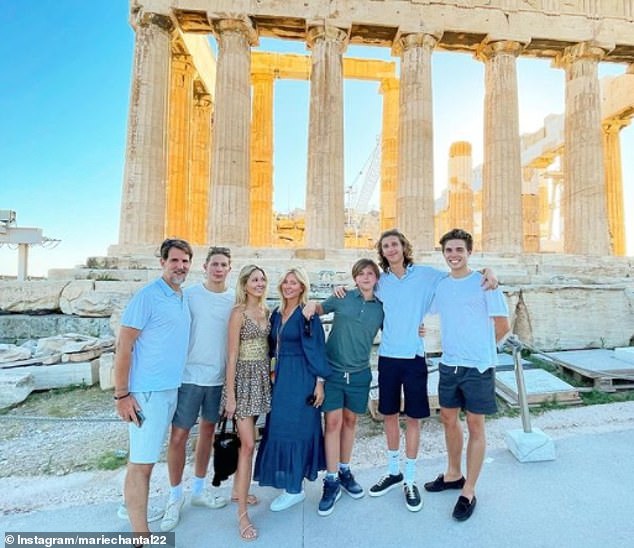 Family holiday! Crown Prince Pavlos of Greece, 54, who is based in New York, has jetted off to Athens with his designer wife Marie-Chantal and their five children. Pictured, Pavlos and Marie-Chantal with daughter Olympia and sons (left-right) Constantine Alexios, Aristidis-Stavros, Odysseas and Achileas

Preferring to stay out of the spotlight, Perry’s Instagram account is private and he rarely makes public appearances with Olympia.

But the couple, who have been dating for a year, couldn’t resist documenting their Greek getaway and radiant Olympia shared a snap of them together on Instagram.

Olympia’s grandfather is King Constantine, a relation of Prince Philip, who was exiled from Greece following the 1967 coup. The family continue to use their royal titles decades after the abolition of the monarchy.

Typically stylish, Olympia opted for a flirty brown and white polka dot sundress with thin straps for the day out with her family and her boyfriend. 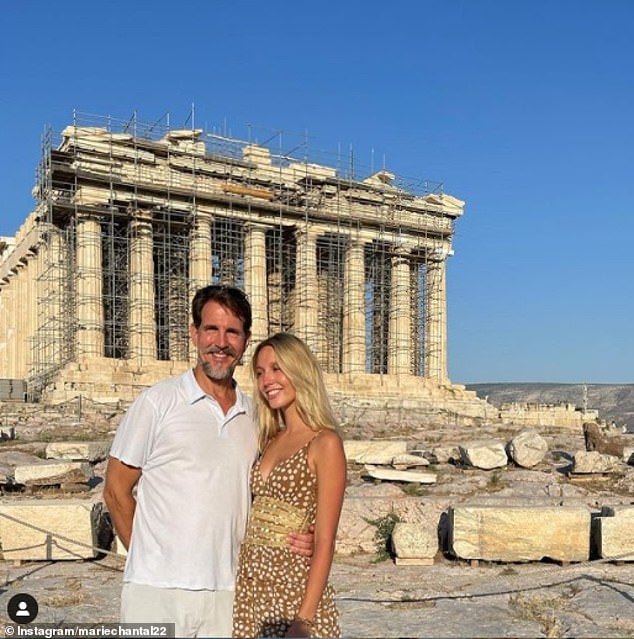 Daddy’s girl: Typically stylish, Olympia opted for a flirty brown and white polka dot sundress with thin straps for the day out with her family. Pictured, with her father Pavlos 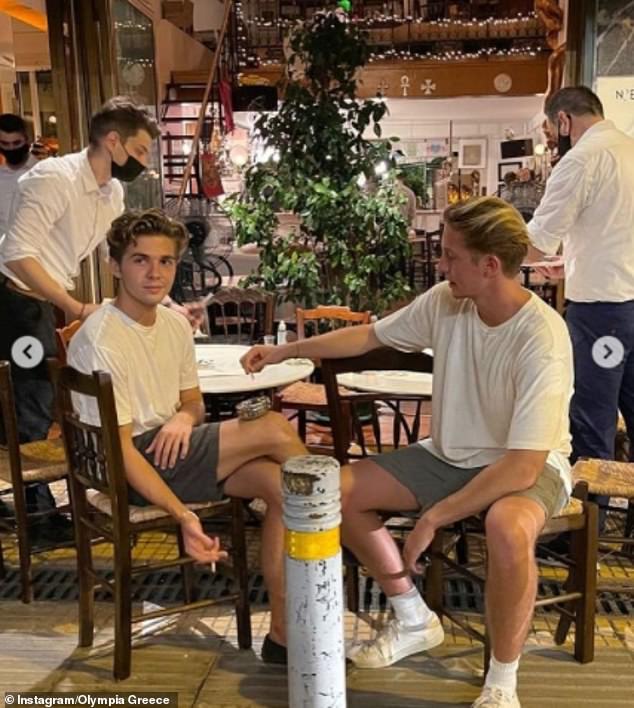 Brotherly love: Olympia shared this photo of two of her brothers chatting at a casual restaurant

For his part, Perry looked handsome in a light blue linen shirt and shorts.

Olympia, who has a close relationship with all four of her brothers, posted snaps of her siblings exploring the city and chatting happily over a relaxed meal at an outdoor restaurant. She also posted a photo of a romantic sunset over the city.

Proud mother Marie-Chantal also posted a handful of snaps on Instagram, including one of the whole family together.

Pavlos and Marie-Chantal spend most of their time in New York but usually head to Europe for the summer.

Olympia has already enjoyed a stop in London, where she no doubt spent time with Perry. 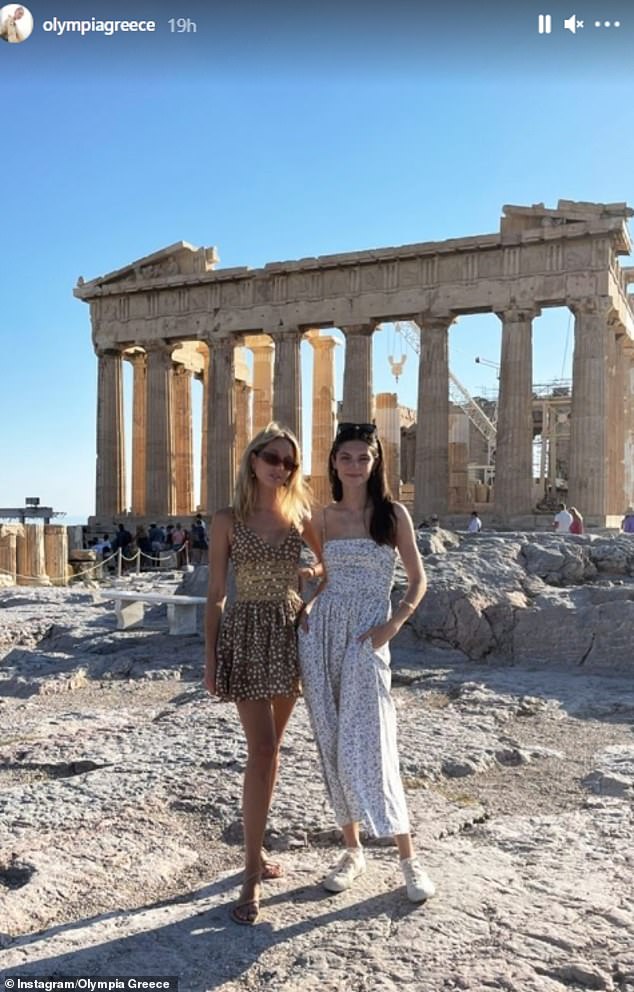 Strike a pose! Olympia stopped for a picture with model Isabelle Massenet, who has also joined the family on holiday. It is thought she is dating Olympia’s brother Achileas of Greece, 20 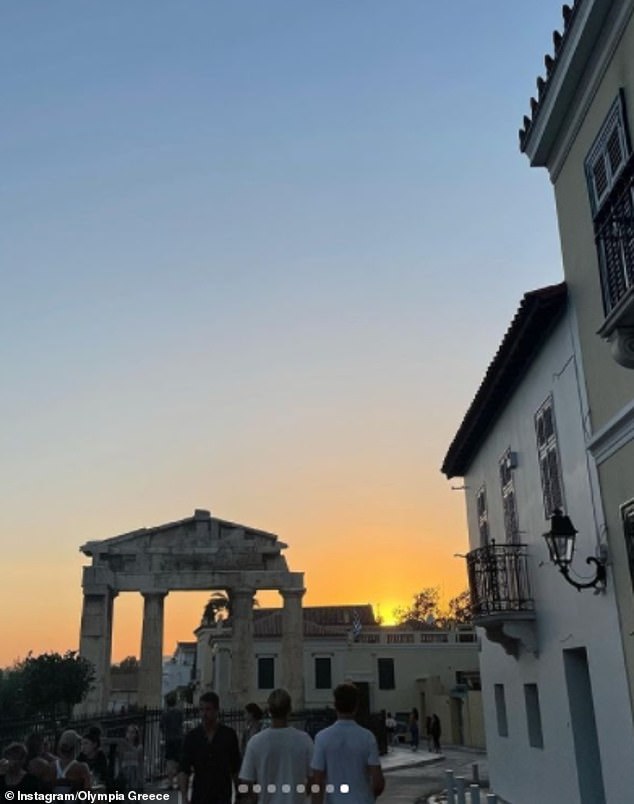 Romance: Olympia shared this photo of the stunning sunset in Athens over the weekend

She also caught up with her uncle Prince Philippos of Greece, Princess Diana’s godson, and his wife Nina.

Philippos, a New York-based hedge fund analyst, and Nina, posed with Olympia outside Somerset House in London, where Philippos’ brother Nikolaos’ photography is being shown as part of the London Design Biennale.

Nina and Philippos married in December in a tiny private ceremony in the glitzy Swiss ski resort of St Moritz, with just their fathers King Constantine, 80, and Thomas Flohr, 60, present due to Covid-19 restrictions.

In May the couple celebrated their nuptials with a second low-key wedding hosted by Vogue writer Alice Naylor- Leyland and her husband Tom at their home of Stibbington House in Cambridge, with the pair decorating their home with white balloons and blue flowers for the occasion.

What To Expect When You Book A Blood Pressure Screening