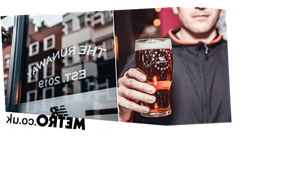 A new pub where you can pay for pints with the number of miles that you’ve run has opened in London, and it is a runner’s haven.

The Runaway pub, in Soho, London, has been launched by athletic apparel company New Balance, with the aim of becoming a sociable hub for runners in the capital.

But your money won’t be any good here – the currency used is the number of miles you have run and logged on the social fitness app Strava.

The more miles you put in, the more booze you’ll be paying for. Which is the best fitness motivation we have ever heard.

New Balance and Strava have teamed up to launch four challenges, for runners of all abilities.

When you join the Strava challenge, you’ll receive a Runaway Card, which you can add to the wallet on your phone. The card will automatically fill up with the miles they’ve run and can be used to exchange miles for pints in the pub. simple.

Challenges will be set on a month-by-month basis with the first challenge starting from the 2 March – 29 March. With this challenge, you need to run 100 miles in four weeks. For every 25 miles you run, you earn two pints, so you don’t have to run the full 100 miles to start earning booze.

Runners can then redeem their pints every Sunday between 8 March – 29 March between 12pm-5pm at The Runaway Pub.

The challenges will be launched on Strava each month with new distances being set for each challenge.

So if you have started training for the London Marathon, this could be just the boost you need to start clocking up those miles every week.

In the pub, runners will find a retail area where you can try on and order the latest running kit from New Balance online.

The toilets in The Runaway have blank walls, and guests are encouraged to leave fellow runners a message of encouragement. The downstairs also features a gym area for post-run stretches and work out sessions, complete with two treadmills, changing rooms and lockers.

This is the second year for The Runaway pub, and organisers are certain the response is going to be positive.

‘We’re delighted to bring The Runaway back for another year,’ says Samantha Matthews, senior marketing manager at New Balance UK and Ireland. ‘We were blown away by the success of the pub last year and we want runners to embrace The Runaway as their community home again this year.

‘As a brand, we support runners of all abilities and our passion is to encourage more people to run. The Runaway gives us the perfect call to action to achieve this, after all who doesn’t want to earn themselves a pint.’