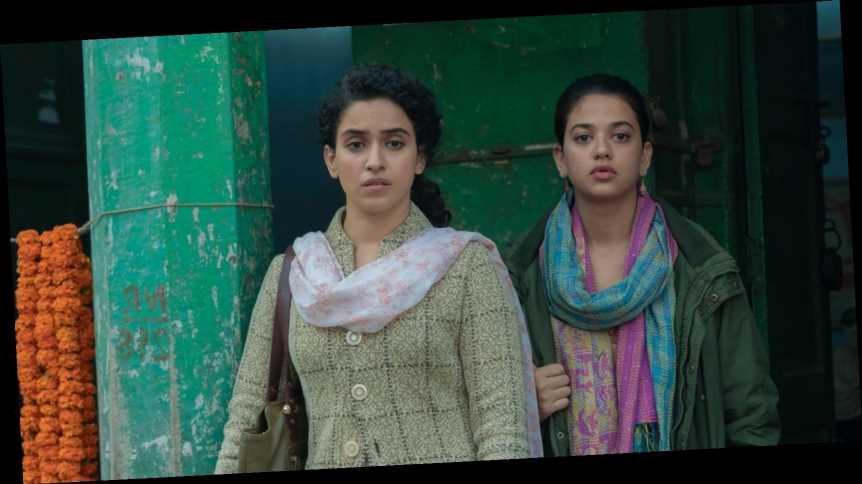 There is an abundance of new TV shows and films to watch on Netflix this weekend, including The One, Bombay Rose, Deadly Illusions, Operation Varsity Blues, and the unmissable Pagglait.

March is well and truly in full swing, now, but there’s still a wealth of new films and TV shows coming to Netflix this month.

The One, a TV adaptation of John Marrs’ unputdownable psychological thriller, is still trending (in fact, it’s been stuck in the number one spot of Netflix’s Top 10 since its debut!), and the wait is finally over for the The Irregulars, a supernatural twist on the classic Sherlock Holmes story that’s guaranteed to intrigue armchair detectives everywhere.

Jennifer Garner’s Yes Day, a sugar-sweet family comedy, has been nicely tempered by the release of Deadly Illusions, a steamy thriller starring Sex And The City’s Kristin Davis as a novelist who finds herself slowly becoming obsessed with her children’s attractive new nanny.

Netflix’s The One: why we’re so drawn to the show’s theories on love

True crime fans will most likely want to check out Operation Varsity Blues, a new documentary that takes a deep dive into the fraudulent methods used by Rick Singer to get the children of rich and famous families into top US universities.

And then there’s the quirky Pagglait, a new comedy-drama film that’ll be your perfect Friday night watch.

With all that to enjoy and more, here’s our pick of what’s new on Netflix this month.

Please note that this article will be updated regularly to include new titles.

Ahead of what would have been his 50th birthday, Biggie: I Got A Story To Tell offers a fresh look at one of the greatest, most influential rappers of all time by those who knew him best.

The coming-of-age drama, based on the Jennifer Mathieu book of the same name, stars Hadley Robinson and Amy Poehler as an inimitable mother-daughter duo. And all you need to know is this: Moxie tells the story of girl from a small town who, inspired by her mother’s Riot Girl past, starts a feminist revolution at her high school.

Murder Among The Mormons – 3 March

Murder Among The Mormons is coming to Netflix this March.

This three-part true crime documentary series – directed by Jared Hess (Napoleon Dynamite) and Tyler Measom (An Honest Liar) – takes us back to 1985, when a trio of bombings shocked the Salt Lake City Mormon community and threatened the historical foundations of the church altogether.

Based on the first two live-action Pacific Rim films, this animated series focuses on siblings Taylor and Hayley, who have been living in the ruins of Australia when it was overrun by Kaiju. When the two find an abandoned Jaeger and learn to pilot it to combat the monsters that have overridden their home, though, the adventure really kicks in.

In Nevenka: Breaking The Silence, Nevenka Fernández speaks for the first time about being sexually harassed in 2000.

As per the official Netflix synopsis, Nevenka: Breaking The Silence sees “Nevenka Fernández speak for the first time in 20 years about, in her own words, the hell she went through back in 2000 when she reported having been a victim of sexual harassment facing not only her aggressor but also the male chauvinist society of that time.”

In this beautiful hand-painted animation, created by award winning animator Gitanjali Rao, a Hindu girl falls in love with an orphaned Muslim boy after escaping from an arranged marriage.

Netflix’s The One: prepare to become obsessed with this psychological thriller

This German docuseries follows Fynn Kliemann and Olli Schulz as they transform a houseboat into a floating art space.

In this unusual reality series, an estate agent and a wedding planner go head-to-head in a battle to win the hearts, minds, and budgets of brides and grooms-to-be.

The fan-favourite (and Emmy award-winning) docuseries, Last Chance U, returns to Netflix for its premiere season of basketball.

“Get ready for a dynamic and intimate look at the lives of the East Los Angeles JUCO players and their coach, John Mosley,” promises the official synopsis.

Set in 1609, this Netflix Original series sees a group of women accused of witchcraft lure their inquisitor into witnessing the witches’ Sabbath.

Set five minutes in the future (or thereabouts), The One sees scientists discover that everyone has a gene matched with one other person. One other person, mind, who they are destined to be with, irrespective of sexuality, race, age, or location. But this isn’t your typical sci-fi thriller; it’s also the sort of crime drama that will keep you guessing throughout the series, too.

Starring Jennifer Garner and Edgar Ramirez, this sweeter-than-sugar family film follows two parents who spend the entire day saying yes to all of their children’s requests.

In this horror film, a priest with a haunted past and a novitiate on the threshold of her final vows are sent by the Vatican to investigate when a young nun at a cloistered abbey in Romania takes her own life. There, they uncover the order’s unholy secret as they are forced to confront a malevolent force in the form of the same demonic nun that first terrorised audiences in The Conjuring 2.

As a former street child, Mehmet has a soft spot for the area’s many homeless children. And so, when he discovers an eight-year-old boy hiding in his co-worker’s trash sack, Mehmet makes it his business to reconnect the child with his family.

New on Netflix: 24 new TV shows have been announced, and we’re 100% into them all

Created by Michelle Obama herself, Waffles + Mochi is, ostensibly, a kids show. However, all about the art of cooking and how it can connect us to cultures around the globe, it looks like the sort of TV show we all need in our lives right now.

In November 2013, Véronique Pirotton was found dead in a hotel room in Ostend. According to her husband, Belgian politician Bernard Wesphael, she had taken her own life. As this true crime docuseries makes clear, though, there was far more to it than that.

In 2019, more than 50 parents were accused of paying huge sums of money to a third party organisation in order to secure positions at top universities for their children, including actors Felicity Huffman and Lori Loughlin. Netflix’s Operation Varsity Blues retells the story, and explores exactly how mastermind Rick Singer was able to cash those big cheques to fraudulently inflate entrance exam results and bribe officials.

Your typical good-bad movie, Deadly Illusions sees Kristin Davis take on the role of a bestselling female novelist who, suffering from writer’s block, hires a seemingly innocent young woman to watch over her twin children. As Davis’ character dangerously indulges in her new bestseller, though, the line between the life she’s writing and the one she’s living becomes blurred.

When her career and personal life get derailed, an aspiring young country singer takes a job as a nanny for a rugged cowboy named Beau and his five children. And…

Well, you can probably guess what happens next in this feel-good musical series, can’t you?

From the creators of Money Heist comes this new action-packed series complete with dark humor and adrenaline-filled moments. Coral, Wendy and Gina go on the run in search of freedom while being chased by Moisés and Christian, henchmen of Romeo, pimp and owner of Club Las Novias. Together, the women embark on a frenetic race during which they will have to face many dangers. Their only plan: to stay alive for five more minutes.

When New Yorker Rachel Chu agree to spend the summer in Singapore with her boyfriend, Nick, she envisions a humble family home and quality time with the man she hopes to marry. What Nick has failed to let his girlfriend know, however, is that his family is obscenely wealthy (and famous!) and that he is the country’s most eligible bachelor. Cue the drama.

Set in Victorian London, The Irregulars follows a gang of troubled street teens who are manipulated into solving crimes for the sinister Doctor Watson and his mysterious business partner, the elusive Sherlock Holmes. As the crimes take on a horrifying supernatural edge and a dark power emerges, it’ll be up to the Irregulars to come together to save not only London but the entire world.

Pagglait arrives on Netflix on 26 March.

If you’re after a heart-warming movie that raises a smile in the face of adversity (and difficult family members), the quirky Pagglait will be right up your alley. This new Hindi-language, comedy-drama film tells the story of Sandhya (Sanya Malhotra), a young widow who embarks on a journey of self-discovery after her husband’s death.