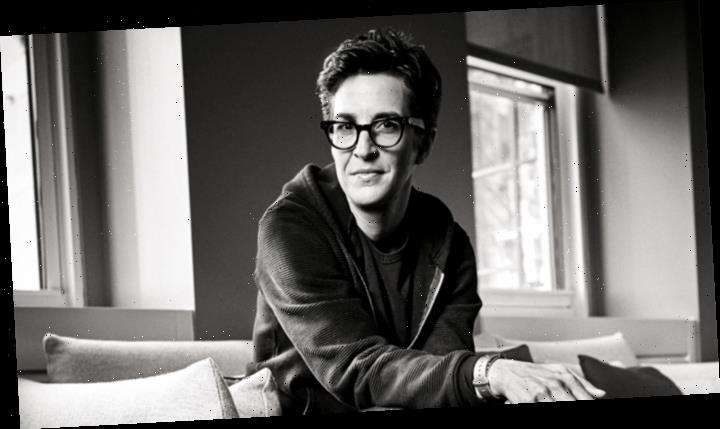 Rachel Maddow’s devotees are ferocious, insatiable. Her fans are loath to miss a single nightly newscast hosted by the erudite MSNBC star. I know. I’m one of them. But it’s not only dyed-in-the-wool liberals like myself who tune in to “The Rachel Maddow Show” to feast on her scrupulous in-depth research, connect-the-dots analysis, compelling interviews, plainspoken style and witty banter. She’s gained respect even from some of her detractors. Unlike many of Maddow’s formidable counterparts at rival cable news networks, including CNN, she’s not a regular target of President Trump’s nasty tweets — perhaps for good reason. Still, as she points out, when he does single out individual journalists, it’s “an attack on all of us.”

Maddow’s show, which launched in 2008 and is the linchpin of the network’s primetime, was the third-most-watched show in cable news in 2019, capturing about 2.79 million viewers on average, according to Nielsen. But her ratings have soared at key news moments — for instance, when she landed an exclusive interview with Rudy Giuliani associate Lev Parnas on Jan. 15 and captured a record 4.5 million viewers — beating Fox News’ “Hannity” (3.7 million). (Maddow’s ratings slipped slightly the following night when Part 2 of her Parnas interview aired.)

Here are edited excerpts from a 10-minute phone interview I conducted with Maddow to get her views on the upcoming presidential election, the challenges of covering the “scandal-ridden” Trump and why she thinks there will be buildings named for Speaker Nancy Pelosi.

Can anyone beat Trump?
From a political science perspective, presidents tend to get reelected more often than they don’t. And presidents who have the benefit of a humming economy, whether or not it’s their doing, tend to be boosted by that in their effort to get reelected.

We don’t know who the Democrats are going to pick or what kind of campaign they’re going to run or how much support it’s going to have financially, and we don’t know if there’s going to be an effort to cheat. So I think it would be foolish for anybody to be too confident and make predictions about what’s going to happen in November. I do think it’s a phenomenally important election, but I think punditry about it is impossible.

Do you think Trump’s base has increased since the last election?
He is unpopular, and he is scandal-ridden, and he has not convinced anybody who didn’t vote for him or approve of him in 2016 that they should approve of him now. He hasn’t grown his support in the country with anything he has done.

Is America ready to elect a woman as president?
Yes. I mean 3 million more Americans voted for the woman who ran last time than voted for the guy.

How challenging has it been covering this president over the past 3½ years at a time when the press is under siege by him and the conservative press?
My work is sort of the same, regardless of whether the country is having a good day or a bad day. And the goal that I have every day when I come to work is to try to increase the amount of useful information in the world, to try to survey what’s going on in the news and figure out what is most important and what I can add in terms of people’s understanding of why it’s important. Some days it feels more fraught than others because I think this presidency has really put the country in more fundamental peril than we have been in lots of ways before. But the day-to-day of work doesn’t change that much.

What would you say is different about reporting on Trump and his administration when compared with other presidencies?
There are some unique things, right? One is that we certainly get way more threats and attacks than we used to. It’s not like we didn’t get them before. We just get more now and they’re more vile, and they’re supported by the president.

And then, we’re in this weird situation where we can’t really in good conscience put people [on the show] from the administration — like from the White House — because they have no qualms whatsoever about flat-out lying to your face. To the point where Corey Lewandowski in the House, under oath, admits that, yeah, he regularly lied to the press because he doesn’t see any reason why the press shouldn’t be lied to. He was the president’s campaign manager. We had to go through a kind of learning process where we realized that we can’t actually vouch for the validity of what our administration and campaign guests from the other side are saying. And so therefore we can’t really put them on TV and have them convey what appears to be factual information. We had to kind of just stop doing that, I think, as an ethical matter. That was a weird thing to go through, particularly after Trump got elected.

Have you ever felt that your personal safety was at risk?
Not in a way that’s newsworthy. Everybody who’s on TV and in the news business to a certain degree is kind of used to it at this point. But when the president singles out individual journalists, not me, but when you’ve seen him single out and call for his supporters to kind of wage war on individual journalists, that’s an attack on all journalism and an attack on all of us.

There’s always been an adversarial relationship between the White House and the press, but it has intensified tenfold under Trump.
Oh, yeah. And there’s no qualms about it. There’s no resistance to it. And there’s no compunction at all about personalizing it and making sure the ire of the mob and conservative media-driven attacks are personal and direct. Again, it’s not only specifically journalists but people in his administration, who work in his own government, judges, jurors, people who’ve responded to jury duty, he’s singled them out and attacked them. That’s new. It’s a qualitatively different thing. It’s a more authoritarian approach to political opposition.

Since Nancy Pelosi is on our cover this week, I would love to know your thoughts on the speaker and how much of a role she’s played in Democratic politics.
There will be buildings named after Nancy, potentially before the end of her career or certainly after it. She is just an incredibly effective, principled politician who has a track record that you’d stack up against anybody else in the past 50 years. She’s an icon, and she will go down in history as a legend, and there’s nobody parallel to her in Democratic Party politics.

And I would say that the Republicans haven’t had anybody of her stature in legislative politics in living memory. It’s just that she’s one of a kind.

Britney Spears’ Son, 13, Claims His Mom Might Quit Music For Good & Admits He’s A Fan Of Her BF