Mayors in Melbourne’s north-western suburbs say they are sick of getting a “raw deal” from the Morrison government on infrastructure following a scathing audit that found a multibillion-dollar fund for commuter car parks and road intersections had not been awarded on merit.

The Australian National Audit Office found projects under the $4.8 billion federal Urban Congestion Fund program had been green-lighted by Prime Minister Scott Morrison the day before he called the 2019 election, and the money was directed mainly in Liberal-held or marginal seats. 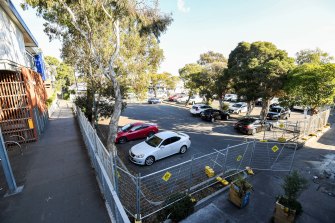 The carpark behind Balaclava station in Melbourne’s south-east was slated for redevelopment under the Morrison government’s infrastructure plan.Credit:Joe Armao

The bulk of the funding in Melbourne was directed to roads in the south-east, even though infrastructure experts said roads in the city’s Labor-dominated north-western suburbs were most congested and in greater need of upgrades. These include the Hume Freeway between Donnybrook and the M80 Ring Road, and the airport to the city via the Tullamarine Freeway, both of which run through Hume Council.

The Auditor-General found 21 commuter car parks in Victoria had been announced without consulting the state government and included some sites where the state was already building projects of its own. These included stations at Hurstbridge, Craigieburn, Seaford, Beaconsfield, Eltham, Pakenham and Frankston.

One of these was in St Kilda East next to Balaclava Station. The Federal government announced its redevelopment in April 2019 even though Port Phillip Council had passed a resolution a year earlier to explore its redevelopment as community housing and later moved on with a conditional transfer of land for that purpose.

The federal government’s station car park proposal has since been scrapped as the council pursues the social housing development.

“My understanding is that there was zero consultation with either the state or the local council,” said Labor MP Josh Burns, whose seat of Macnamara includes the station.

“It’s extraordinary how the Morrison Government has completely taken away any needs-based or impartial decision making when it comes to spending federal cash.”

Hume mayor Joseph Haweil said the scheme had delivered an upgraded commuter car park at Craigieburn Station, but roads that were “bursting at the seams” had received nothing. Hume is the eighth fastest growing municipality in Australia, and it will soon house a new quarantine facility.

“If we’re doing the heavy lifting, I expect that the Federal government will also come to the party and make some commitments around local road infrastructure,” Cr Haweil, a Labor party member, said.

“The last thing growth areas would like to see [is] politically motivated decision making on infrastructure, [which] affects everyone, whether you’re a Liberal voter or a Labor voter.”

Moonee Valley Council, through which the Tullamarine Freeway also runs, missed out on both road and carpark funding. Mayor Cam Nation, a former member of the Liberal Party, said the council had no record of being consulted on the fund, and that being overlooked was “another example of the west getting a raw deal when it comes to federal infrastructure funding”.

“We welcome the Urban Congestion Fund audit findings and hope that moving forward the needs of the west, and in particular the needs of Moonee Valley, are considered for future funds,” he said.

Maribyrnong mayor Michael Clarke, also a Labor member, said roads in the inner north-west municipality were heavily congested but that projects, including a Yarraville car park upgrade and pedestrian crossings on Victoria Street and Charles Street, had missed out on funding. He did not believe the council had been offered an opportunity to bid for a project.

“If programs within this fund have been elected based on discretion and not merit, it is disappointing to see,” he said.

The Calder Freeway, between Gisborne South and the Tullamarine Freeway, is forecast to have delays of 51 minutes in 2031. The fund has allocated $50 million to improve a portion of the freeway, which runs through Brimbank Council.

But Labor-aligned mayor Ranka Rasic called on the federal government to spend more and said the municipality and city’s west were growing at a pace that required significant and sustained investment.

“This is another example of the west being ignored despite being one of the fastest growing regions in Australia,” she said. “We aren’t asking for more, we are asking for fairness in decision making. We deserve better.“

The council backlash comes after the Auditor-General’s office revealed the extent to which Urban Congestion Fund was managed inappropriately by the federal government. So far, just two of the 47 car parks announced in the lead-up to the federal election have been completed and project funding was overwhelmingly allocated to Victoria, with the most successful electorates held by the Coalition (Goldstein, Deakin, Kooyong and Banks).

A Victorian government spokesman said on Tuesday: “We’re assisting the Commonwealth in the planning and delivery of car parks at a number of Victorian locations. Any questions about funding or delivery should be directed to the Commonwealth.”