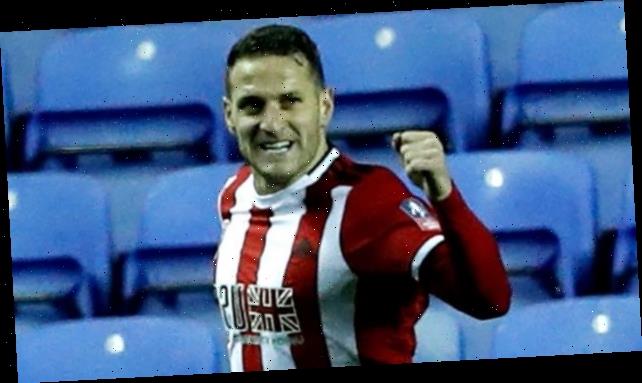 Media playback is not supported on this device

Substitute Billy Sharp headed the winner from a Luke Freeman cross in added time at the end of the first period of extra time.

David McGoldrick had given the visitors the lead with a header from a Ben Osborn cross inside 90 seconds.

But Reading levelled with a George Puscas penalty on the stroke of half-time after Andy Rinomhota was fouled by George Baldock, and came close to causing an upset.

Blades made to sweat

Chris Wilder’s side won what is the first FA Cup fifth-round tie to go straight to extra time, to book their place in the last eight for the first time since 2014.

But the Blades, flying high in eighth in the Premier League, were made to work hard for the victory, even after Sharp had headed in from close range.

Reading midfielder Pele twice came within inches of taking the game to penalties, forcing a save from Dean Henderson and then firing narrowly wide of the post in the final minute.

Earlier, striker McGoldrick had ended a goal drought for the Blades stretching back to 22 April to seemingly set them up for a routine victory.

But Reading, currently in indifferent form in the bottom half of the Championship, showed resilience and patience.

Yakou Meite forced a smart reaction save out of Henderson with a left-foot drive from distance, while they limited their Premier League opponents to just a couple more chances before they were handed an opportunity to level from the penalty spot.

Romania striker Puscas made no mistake from 12 yards for his 12th goal in all competitions since completing a move from Inter Milan in August.

The second half failed to produce another goal but it was certainly not short of energy or endeavour from either side.

Reading seemed to grew in confidence the longer they withstood long periods of Sheffield United pressure and possession, and nearly snatched a winner on the break when Henderson had to punch a John Swift cross away from the head of the advancing Meite.

However, the extra 30 minutes proved too much and the fresh legs off the bench proved pivotal for Sheffield United. 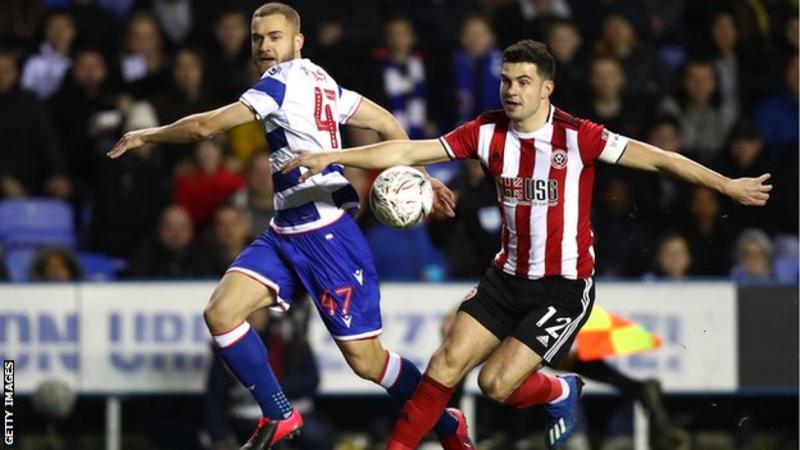 Sharp takes his chance – the stats

‘A long, hard-fought battle’ – what the managers said

Reading manager Mark Bowen: “It’s hard to take when you put that much effort in. We soaked up pressure and we had periods where we took the game to them. It was a game of few chances and we have been done by two crosses into our box.

“It was a long, hard-fought battle and it’s hard to take. My players know what we’re about and what we can do together.

“We have to take this on in our league form, we have 10 games to go and we will pick up points.”

Sheffield United manager Chris Wilder: “It was always going to be tough. We didn’t under-prepare, we knew what we would face.

“It was a fantastic start. The Reading punters got right behind their team and they lifted their game. It was never going to be easy.

“As a Championship side we knocked out so many Premier League sides in this cup and the League Cup, so we knew it was never going to be easy. We got the job done and found a way to win.”

Attempt missed. Pelé (Reading) right footed shot from outside the box is close, but misses to the left. Assisted by Michael Morrison following a set piece situation.

Panagiotis Retsos (Sheffield United) is shown the yellow card for a bad foul.

John Swift (Reading) wins a free kick in the defensive half.

Attempt saved. George Puscas (Reading) header from the centre of the box is saved in the top right corner. Assisted by Garath McCleary with a cross.

Attempt saved. Pelé (Reading) right footed shot from outside the box is saved in the bottom right corner. Assisted by Garath McCleary.

Attempt saved. Jordan Obita (Reading) left footed shot from outside the box is saved in the centre of the goal. Assisted by John Swift.

Attempt missed. Jack O’Connell (Sheffield United) left footed shot from more than 35 yards is high and wide to the left.

Sam Baldock (Reading) wins a free kick in the attacking half.

John Swift (Reading) wins a free kick in the defensive half.

Billy Sharp (Sheffield United) wins a free kick in the defensive half.

John Lundstram (Sheffield United) wins a free kick in the defensive half.

Attempt missed. Billy Sharp (Sheffield United) right footed shot from the right side of the box is too high. Assisted by Ben Osborn following a fast break.

Goal! Reading 1, Sheffield United 2. Billy Sharp (Sheffield United) header from the right side of the six yard box to the centre of the goal. Assisted by Luke Freeman with a cross.

Attempt missed. Andy Rinomhota (Reading) left footed shot from the centre of the box misses to the left.

Andy Rinomhota (Reading) wins a free kick in the defensive half.

Attempt saved. Chris Basham (Sheffield United) header from the centre of the box is saved in the top right corner. Assisted by Ben Osborn with a cross.