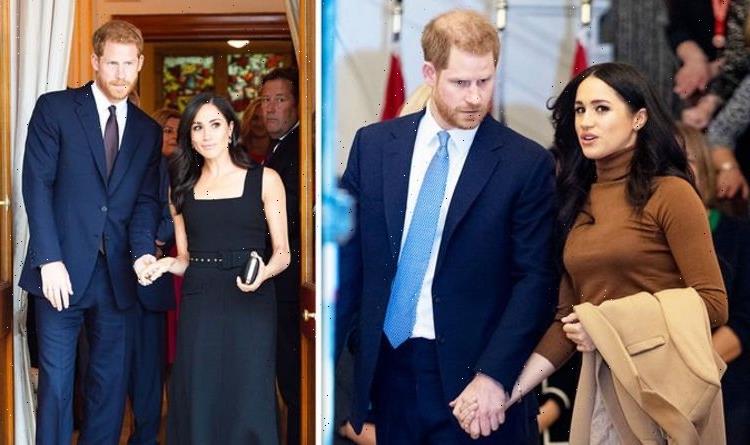 ‘Relationship is not smooth sailing!’ Expert on why Meghan & Harry ‘constantly hold hands’

Since the day Meghan Markle and Prince Harry stepped out as a couple, they have been pictured being extremely tactile with one another in public. Express.co.uk spoke exclusively to Inbaal Honigman, astrologer and body language expert about the Duke and Duchess of Sussex’s physical affection and how this differs from Kate Middleton and Prince William’s.

Meghan and Harry are openly affectionate with one another; be it arriving at a public event holding hands, to the intimate photographs they have shared with the world to mark several important occasions, like the beautiful black and white images from their engagement.

Speaking about their public display of affection, Inbaal said: “Looking at Harry and Meghan, they are certainly in love.

“They haven’t been married for that many years, and are still having babies, which is a very loving stage of a relationship.

“So their constant hand holding, cuddling, leaning on each other, are displays of affection, which are definitely genuine and not for the cameras.”

She added: “An emotional Leo (Meghan) leaning into a stable Virgo (Harry) is exactly where you’d expect those signs to be.

“Their eyes generally look at each other, or in the same direction…. almost.

“They are in sync, but not fully in sync. They are likely to argue then make up.

“Their relationship isn’t fully smooth sailing, but they’re both old enough to know that every problem has a solution, and every argument can be resolved with some love and some compassion,” the expert continued.

“Their facial expressions are always complete – smiling eyes with a smiling mouth, a concerned face with a furrowed brow, a serious face.

“They don’t pull fake faces, but they’re not always 100 percent united in their responses.

“They know each other well, but have not morphed into one another, which in itself is actually healthy.”

Meghan and Harry’s physical touch is in complete contrast to Kate and William’s.

The Duke and Duchess of Cambridge are rarely seen holding hands when attending an event together.

The royal couple doesn’t even stand shoulder to shoulder, instead, they make a point of creating space between each other.

Inbaal commented on this and said: “William, interestingly, is rarely seen holding her hand – but is forever holding his own hand.

“Lacing his hands together is a self-soothing move, and when he feels alone, instead of reaching for his business-like wife’s hand, he reaches for his own.

“Even their awkward dancing photos together, from their youth, their hands barely touch.”

She added: “Their eyes usually look in the same direction, which is a sign of a fantastic union, who are determined to achieve their goals together.

“They are united in their joint mission, as a couple and as royals.”

Get access to a million Kindle books from Amazon for just 99p, here’s how
Recent Posts