Home » ‘RHONJ’ Preview: Teresa & Jackie Get Into A Screaming Match Over The Cheating Rumor — Watch

‘RHONJ’ Preview: Teresa & Jackie Get Into A Screaming Match Over The Cheating Rumor — Watch

In this EXCLUSIVE sneak peek at the May 26 episode of The Real Housewives of New Jersey, Teresa Giudice and Jackie Goldschneider face off over that cheating rumor during Part 2 of the reunion special.

The topic comes up when host Andy Cohen reads a question from a fan, who asks, “Teresa, you went ballistic when Kim D. told everyone your ex was cheating, so why can’t you understand why Jackie’s upset?”

Teresa is quick to say she “didn’t go ballistic”, but when Andy reminds her that she “threw a chair” during the confrontation with Kim D. in 2017, Teresa says she was just giving Kim “a taste of her own medicine.”

Dolores Catania, who appears to be fed up with Teresa’s shenanigans, tells Teresa that she was going “ballistic”, so Teresa should “understand why she was mad”. After all, Teresa spread a rumor, claiming that Jackie’s husband Evan regularly cheats on her while he’s at the gym — who wouldn’t get mad about that? 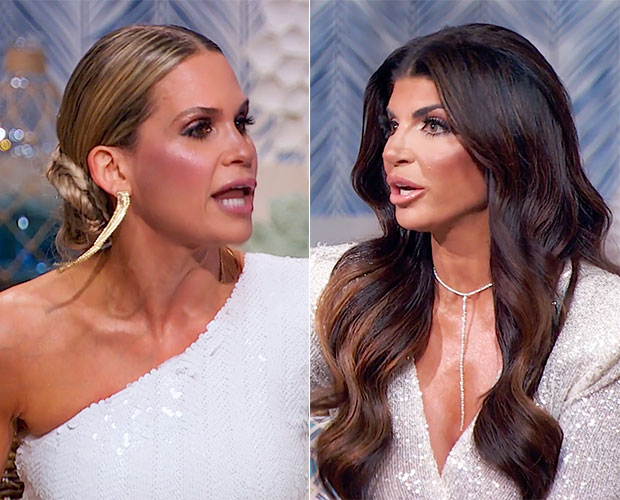 Still, Teresa refuses to take any responsibility for her actions (shocker), and instead, focuses on her belief that Jackie “could have went about it a different way” and not use an analogy about Teresa’s daughter, Gia, when confronting her about the rumor.

Margaret Josephs tells Teresa she went about the whole thing “in a crazy way” — spreading the rumor at Evan’s birthday party with “a lot of glee” — but again, Teresa says she doesn’t feel that she did anything wrong.

Teresa insists she didn’t spread the rumor to “hurt Jackie”, but Jackie says that’s “absolute bulls***”. To see the rest of their fight, watch the video above. Then, catch the second and final part of The Real Housewives of New Jersey reunion special this evening, May 26, at 9pm on Bravo.