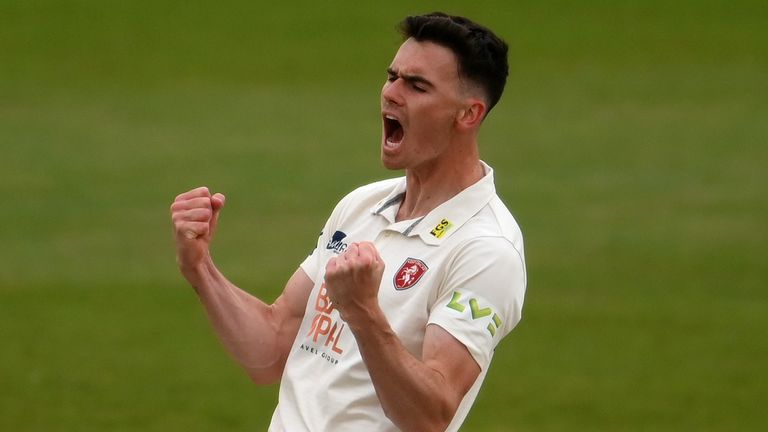 Kent seamer Nathan Gilchrist recorded his best List A figures of 5-45 as the Spitfires finally broke their Royal London Cup duck with a 21-run victory against Middlesex.

Gilchrist’s opening burst wrecked Middlesex’s top order at Radlett, while off-spinner Hamidullah Qadri returned 3-47 to ensure the home side were bowled out for 196. Middlesex vs Kent scorecard

Half-centuries by Marcus O’Riordan – who reached that landmark for the first time in List A cricket – and George Munsey enabled the Spitfires to post 217-9 after rain reduced the contest to 35 overs apiece.

Middlesex slid to 49-4 in reply and a valiant partnership of 57 from 44 balls between Josh de Caires and James Harris was not enough to complete the fightback.

Michael Burgess, posting a one-day career-best of 73 for the second time in 15 days, and Will Rhodes, with 65, set up a comfortable victory for Warwickshire over Northamptonshire by 134 runs at Edgbaston. Warks vs Northants scorecard

With rain reducing play to 46 overs a side, the home team, put in, were eleven for two after 19 balls but the pair’s stand of 133 paved the way for a late onslaught. Matt Lamb, belting 65, and the innovative Dan Mousley, with 54 from 44 balls, smashed all but two of the 104 ultimately hammered from the final eleven overs.

Both men fell swinging in the last seven balls but a target of 279 at 6.07 an over always looked demanding. By the reply’s eighth over, it seemed formidable. As Ricardo Vasconcelos, the skipper and key batsman, edged behind, cutting at Jordan Bulpitt, Northants became 35-3 and there was no way back.

Sussex Sharks are celebrating their first win in the competition with three of their young players, in spin duo James Coles and Archie Lenham plus centurion Ali Orr, playing key roles in the tense two-wicket success over Worcestershire Rapids at New Road. Worcs vs Sussex scorecard

Coles and Lenham, both aged 17, picked up three wickets apiece as Worcestershire were restricted to 233-9 after opting to bat on a used pitch.

Then Orr, 22, followed up his maiden County Championship century against Kent last month with a superb hundred in only his third List A innings.

He paced his knock perfectly, taking 93 balls to reach his fifty but only another 35 to get to three figures with four sixes and six.

What a moment, you beauty @travishead34!

Sussex were cruising at 160-1 but a late collapse meant they still needed seven from the final over but Travis Head, with 38 not out, settled matters by smashing the third ball from Josh Baker for six over long on.

Ben Charlesworth kept Gloucestershire‘s hopes of reaching the knock-out stage alive with a career-best 99 not out in a seven-wicket win over Hampshire at Bristol. Gloucs vs Hants scorecard

The 20-year-old left-hander smacked 13 fours, sharing an unbroken fourth-wicket stand of 130 with Jack Taylor, who finished on 67, having been dropped twice, as the hosts reached a target of 205 with nine balls to spare.

In a match reduced to 37 overs per side, Hampshire ran up 204 for eight after winning the toss, Tom Alsop top-scoring with 57 and sharing an opening stand of 90 with Tom Prest.

PURE. TALENT.@ben_c64 made a List A career best 99* off 104 balls with 13×4️⃣s to help Gloucestershire to victory against Hampshire 💪

Graeme van Buuren claimed 3-36 with his left-arm spin and the total looked below par, despite a slow pitch.

Yorkshire and Nottinghamshire remain in the hunt for the knockout stage after their rainy No Result at York’s Clifton Park. Yorkshire vs Notts scorecard

Both sides have six points from six games with two still to play in the race for a top-three finish in Group B. Notts currently occupy third place on net run-rate from Yorkshire.

Notts reached 185-5 in an entertaining 33 overs of play, with nothing possible beyond 2.30pm.

Had Yorkshire started a 10-over chase, the minimum required for a game, they would have needed 94 to win. But play was called off just after 5pm.

Who is Stephen MacGregor in Hollyoaks as Cindy makes a huge discovery?
Recent Posts