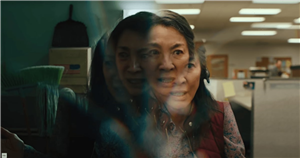 There’s a new multiverse headed our way, and Michelle Yeoh is right at the center of it. On Dec. 14, A24 released the trailer for upcoming sci-fi action film Everything Everywhere All at Once — which in addition to Yeoh stars actors like James Hong, Jamie Lee Curtis, Harry Shum Jr., Stephanie Hsu, Ke Huy Quan, and Jenny Slate. From the looks of the clip, we’re clearly in for quite a wild ride.

At the start of the trailer, Curtis’s character introduces us to Yeoh’s Mrs. Wang — an “exhausted Chinese American woman who can’t seem to finish her taxes.” “Now, you may only see a pile of receipts, but I see a story,” Curtis says in the clip. “I can see where this story is going. It does not look good.” From that point on, the real adventure begins as Mrs. Wang is thrust deep into another universe with multiple versions of herself. Within this strange multiverse, she discovers she may be the only one capable of defeating the “great evil spreading throughout the many verses.”

Between Curtis tackling another Freaky Friday-esque role and Yeoh transforming into the next superhero-like figure to control the multiverse, we’re beyond ready to see everything this movie has in store for us. Everything Everywhere All at Once is expected to arrive in theaters on March 25, 2022. Watch the trailer for the film above.

Spider-Man: No Way Home will make you fall in love with superhero all over again

‘The Bachelorette’: Are Joe Coleman and Michelle Young Still Together or Engaged Now?
Recent Posts