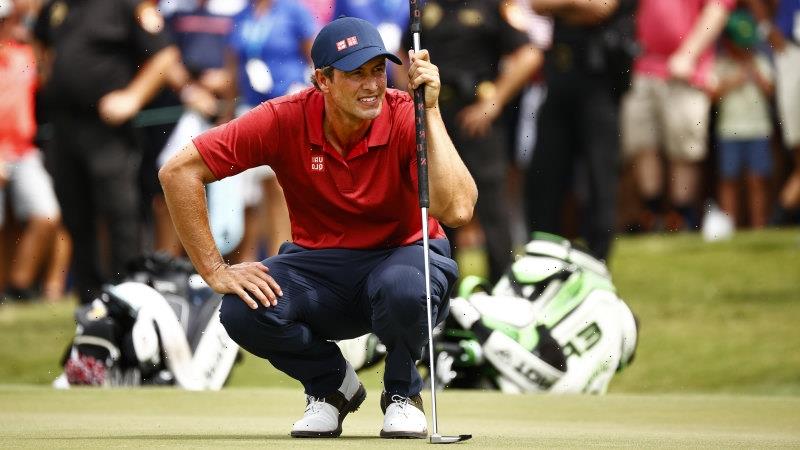 Adam Scott fell just short of a PGA Tour victory after a remarkable six-man play-off in the Wyndham Championship.

The Australian was pipped by Kevin Kisner, who also bested Roger Sloan, Kevin Na, Si Woo Kim and Branden Grace after they all finished on 15 under at Sedgefield Country Club in North Carolina on Sunday (Monday AEST). 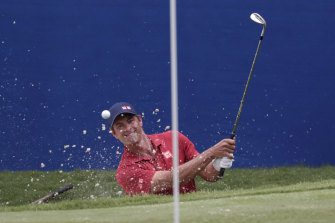 Adam Scott hits out of a trap on the 18th hole during the final round of the Wyndham Championship.Credit:AP

“To be standing here [with the trophy] is pretty sweet,” said Kisner, who had lost in all five of his previous play-offs.

With Scott looking at a four-footer for birdie on the first extra hole, Kisner thought he would have to hole a pitch from short of the 18th green just to stay in the play-off, and he nearly did it. Kisner grimaced as his ball settled just right of the cup.

But Scott’s short putt missed badly and all six players went back to the 18th tee after hitting par. On the second extra hole, only Kisner gave himself a close look at birdie on the 505-yard closing hole. He stuck his approach to three feet and made the putt to win the record-tying play-off. It was the third six-man playoff on the PGA Tour and the first since Australian Robert Allenby won at Riviera in 2001.

It didn’t look like a play-off would be necessary after Russell Henley, who led after the first three rounds, recovered from a slow start to reach 17-under after a birdie on the 10th hole. But Henley bogeyed three of the next four and came to the 72nd hole needing par to stay at 15 under. He then missed a six-footer. 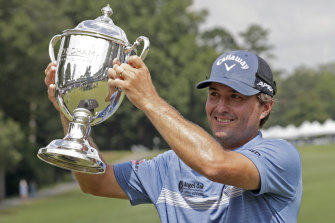 “I knew I had to shoot under par today, so just disappointed,” Henley after his one-over 71. “It stings pretty bad.”

Kim shot 64 in the final round. Scott had a 65 while Kisner, Grace, Na and Sloan each closed with 66.

American Kisner, an excellent putter who now has four PGA Tour wins, hopes the win will put him in Ryder Cup contention.

American captain Steve Stricker will make six picks after the Tour Championship, and Kisner believes he’s at least put himself in the mix.

“Who knows, man?” Kisner said. “I’ve never been picked before, so I’m not going to go out there and jump on a limb and say that I’m going to get picked this year.

“I love Stricker, he’s a great friend and great guy. He’ll do what’s best for the team and the country.”