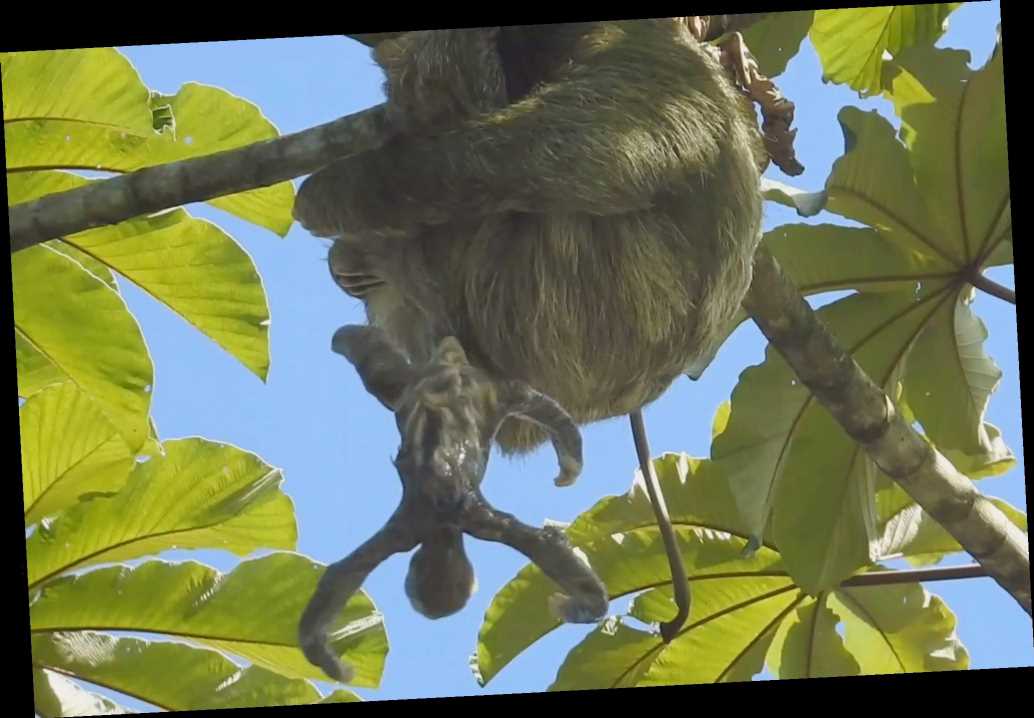 What a way to come into the world.

A baby sloth’s life was hanging by a thread after a nail-biting birth left it precariously dangling from its mother’s umbilical cord high up in a tree. A video of the death-defying moment has racked up over 1.2 million views since being posted to Facebook on Feb. 26.

“A three-toed sloth having a baby in the wild is something that you don’t see every day,” commented Vela, who has been working with tour company Canoa Aventura since 2013.

However, mom’s tree-top delivery quickly goes awry after the baby topples out of her womb, causing onlookers to cry out in shock. Fortunately, the umbilical cord halts the baby’s death plunge like a fleshy rappelling rope, whereupon the frantic mom swoops her dangling infant up — surprisingly quickly — into her nurturing arms.

“That was amazing,” an astonished Vela told National Geographic. “I think I will die and I will never see something like that [again].”

The now-viral video garnered a flurry of Facebook reactions. “This does not seem like a safe way to have a baby,” said one social-media sloth enthusiast.

“What an amazing moment to witness,” added another.

Wildlife experts seem to share that sentiment. “I don’t think the baby dangling from the umbilical cord like in the video is the norm,” Sam Trull, director of the Sloth Institute of Costa Rica, told National Geographic. “I was jealous I wasn’t there to see it myself.”

Witnessing a live birth like this is very rare, Dr. Rebecca Cliffe, founder of the Sloth Conservation Foundation in Costa Rica, told CNN.

“To see a three-fingered sloth give birth is something that very few people have been lucky enough to witness,” said Cliffe, who has worked with sloths for more than a decade. “Sloths are secretive animals that live high in the rainforest canopy and specialize in camouflage. To just see one in the wild is lucky, but to observe one giving birth out in the open is very special.”

Trull called the umbilical cord’s inadvertently life-saving mechanism “a great function” and said he “wouldn’t be surprised if sloths have extra-strong umbilical cords,” adding, “Of all the skills sloth need to have, now we know catching a slippery baby is yet another one.”

As for the amateur videographer, Vela told CNN, “It’s definitely the weirdest thing I’ve ever seen.”

Katy Perry Is Pregnant! Look Back at Her & Orlando Bloom’s Love Story