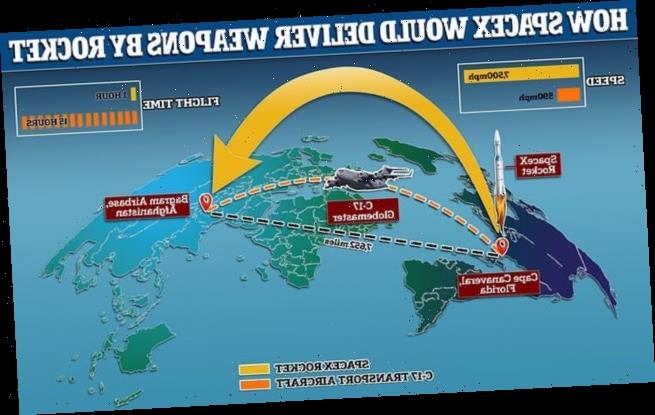 A cargo-delivery rocket that can deliver weapons and hardware to anywhere in the globe within an hour is being developed by Elon Musk’s SpaceX for the US military.

The system would allow materials to be transported the 7,500-odd miles from Cape Canaveral, Florida, to the US-run Bagram airfield in Afghanistan in under an hour.

In contrast, a Boeing C-17 Globemaster III — a military transport aircraft the US owns a 233-strong fleet of, that can fly at maximum of 590mph — would take 15 hours.

The rocket will be able to carry an 80 ton payload, similar to that of a single C-17 — and proof-of-principle tests are expected to begin next year. 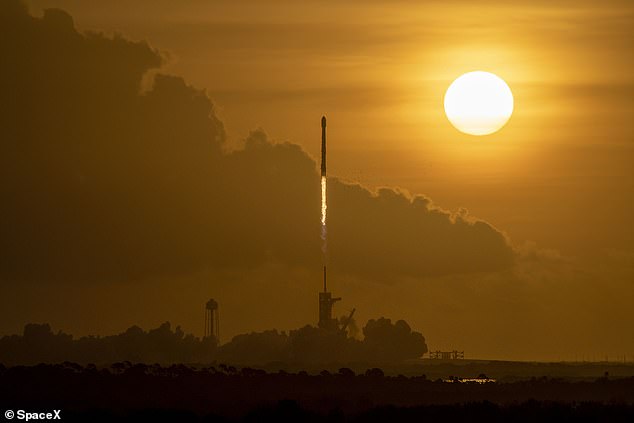 A cargo-delivery rocket that can deliver weapons and hardware to anywhere in the globe within an hour is being developed by Elon Musk’s SpaceX for the US military. Pictured, a SpaceX Falcon 9 rocket is launched into orbit carrying a payload of communications satellites 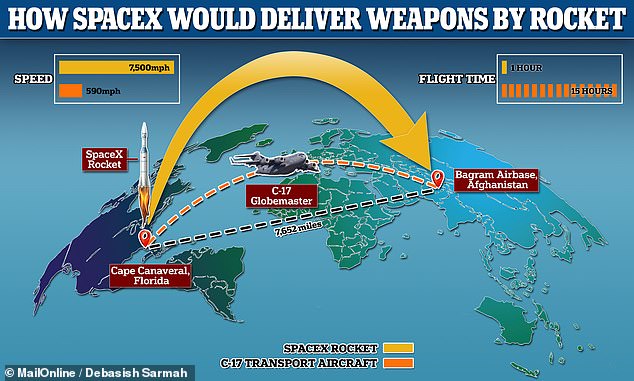 The system would allow materials to be transported the 7,652 miles from Cape Canaveral, Florida, to the US-run Bagram airfield in Afghanistan in under an hour by rocket (yellow), as opposed to the 15 hours such a journey presently takes in a C-17 cargo plane (orange)

The collaboration — which will also include Texas aerospace firm xArc — was announced by US Transportation Command’s General Stephen Lyons.

The first steps in the project will involve an assessment of the potential costs and challenges that will need to be overcome to deliver cargo globally in an hour.

‘Think about the speed associated with that,’ General Lyons said at the conference.

‘I can tell you SpaceX is moving very, very rapidly in this area. I’m really excited about the team that’s working with SpaceX.’

SpaceX has previously demonstrated the ability to vertically land and reuse the booster rockets for its Falcon 9 system onto drone ships out at sea.

However, the aerospace technology firm has never landed a rocket carrying a full payload — and the newly-proposed rocket would carry four times the cargo.

Beyond speed, one major advantage of ferry military cargo via rocket is that — at present — flying over another country via orbit does not require permission from foreign governments, unlike when transporting goods by air.

At present, each C-17 cargo aircraft cost the US military around $218 million — it is unclear at present how this, and operating costs, would compare with the rocket. 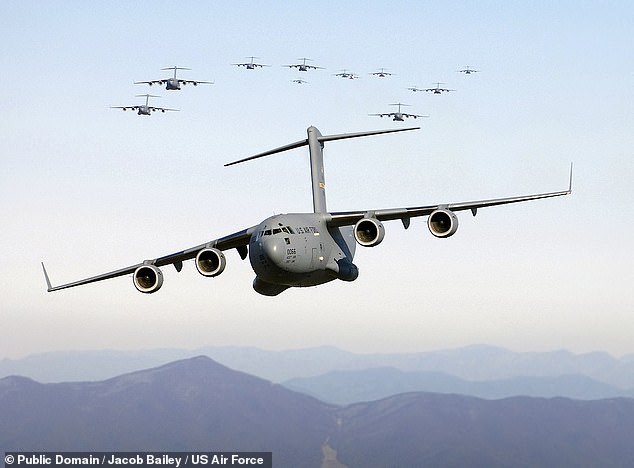 A Boeing C-17 Globemaster III (pictured) — a military transport aircraft which the US owns a 233-strong fleet of, that can fly at up to 590mph — would take 15 hours to ferry cargo from Florida to Afghanistan. SpaceX’s proposed cargo rocket could make the journey within an hour

Key to the realisation of a rocket-based cargo-carrying system is the ability to ensure safe and accurate landings.

‘We send humans up into space safely, so sending cargo via orbit is not a problem. The challenge will be bringing it down,’ Douglas Barrie — an aerospace expert from the London-based International Institute for Strategic Studies — told the Times.

‘How would they bring it down, by parachute or controlled descent? And could it be guaranteed to arrive in the right place?’

‘What would be the urgency for sending military cargo through space?’

WHY DOES SPACEX RE-USE ROCKETS AND OTHER PARTS?

SpaceX tries to re-use rockets, payload fairings, boosters and other parts to try to cut down on the cost of each rocket mission.

The total cost of one of its Falcon 9 launches is estimated to reach £44 million ($61m), while each of its larger Falcon Heavy flights costs £65 million ($90m).

The space company has previously re-used first-stage and second-stage rocket boosters, in addition to one of its previously flown Dragon capsules.

The Dragon spacecraft are used as the final stage of SpaceX missions to resupply the International Space Station. 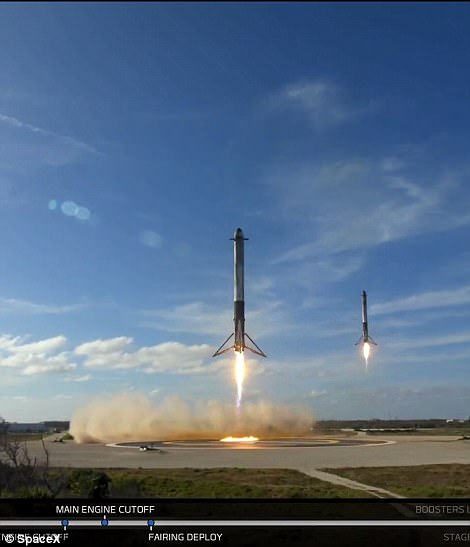 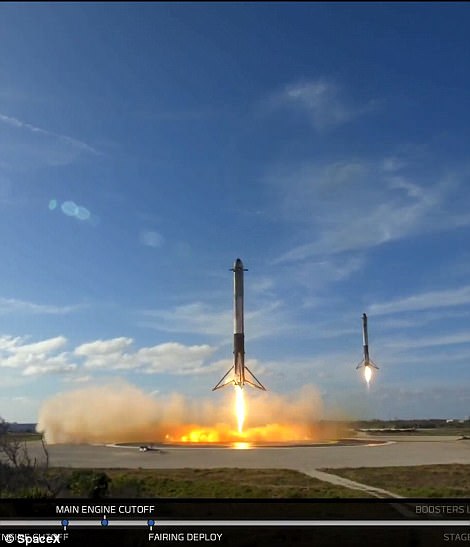 In an incredible accomplishment, the Falcon Heavy’s reused side boosters landed smoothly back down to Earth on two separate launchpads about 8 minutes in.

SpaceX is currently testing a system to recover the fairings of its Falcon 9 rockets.

SpaceX recovered a payload fairing for the first time in 2017.

During its first Falcon Heavy launch in February 2018, the firm landed two of the firms side boosters simultaneously on separate launchpads. 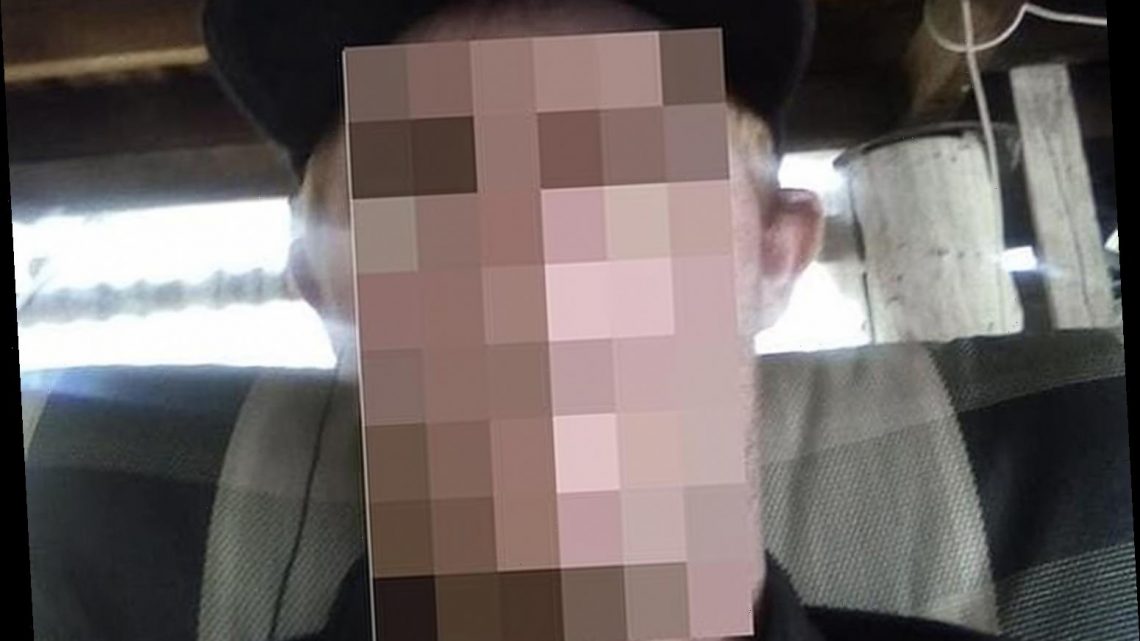 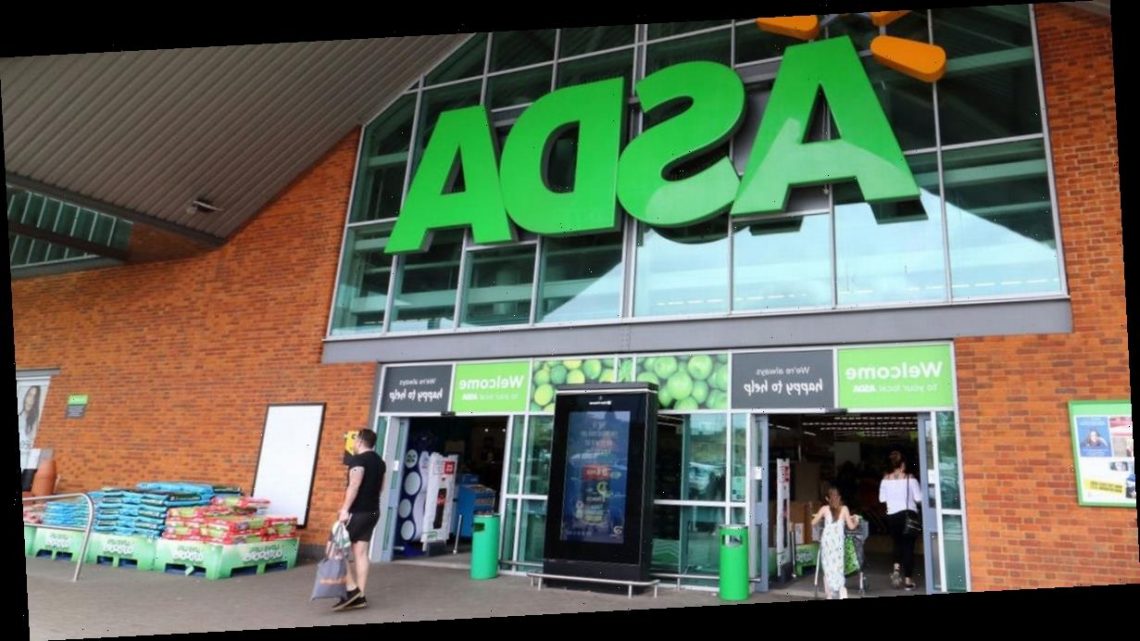 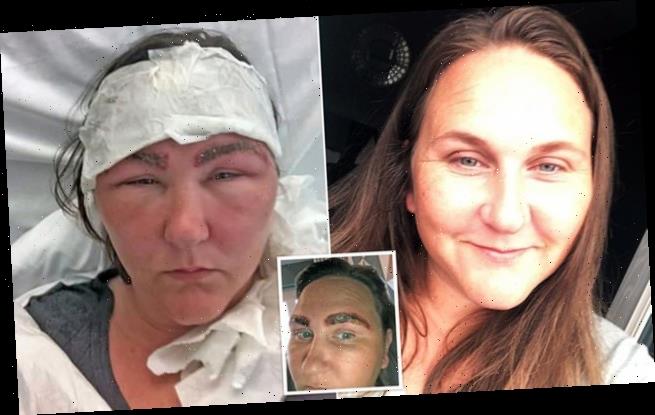 10/28/2020
Woman looked like 'Space Raider alien' after salon dye BURNED eyebrows
This website uses cookies to improve your user experience and to provide you with advertisements that are relevant to your interests. By continuing to browse the site you are agreeing to our use of cookies.Ok