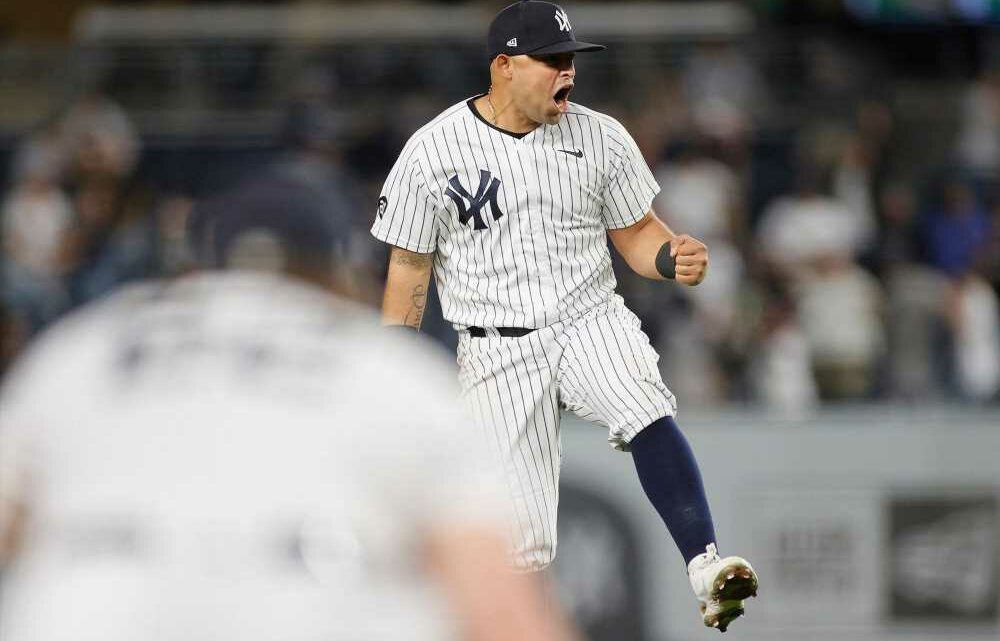 Yankees need this version of Aaron Judge to stay

A feeling of dread gripped Yankee Stadium. The great Aroldis Chapman, on the brink of being stripped of his invincibility, was on the ropes in the ninth inning of a 1-1 death struggle against the White Sox.

Chapman had walked Yermin Mercedes leading off. Tony La Russa sent dangerous base stealer Billy Hamilton in as a pinch-runner. Chapman mishandled Leury Garcia’s sacrifice bunt to his left for an error. First and second.

He got a triple play instead.

Andrew Vaughn grounded one sharply to Gio Urshela at third. Urshela is as instinctive as it gets. He was a couple of steps away from the bag, so he knew that stepping on third was a no-brainer.

After tapping third, Urshela could have thrown for first for the easy double play. He threw to Rougned Odor at second base instead — a dare-to-be-great decision from Urshela. Odor whipped the ball to Luke Voit at first base.

The fans, vaccinated and unvaccinated, were on their feet. Chapman smiled widely as joy from his teammates erupted all around him.

Gleyber Torres, who homered to right in the seventh off reliever Michael Kopech to make it 1-0 before Luis Cessa coughed it up, grounded a walk-off single between third and shortstop in the ninth because there was no way the Yankees, 2-1 winners over the White Sox, were going to waste their triple play and lose this game.

“Vaughn hit the ball pretty hard. I’m right in line with Gio there,” Aaron Boone said. “How he hit it, right away it popped in my head actually, and Gio being as instinctive as he is, obviously did the right thing, quickly stepped on the bag, threw a strike to Rougy, who really turned it over well to really finish off a special play and get us out of trouble there.”

“We were just chatting about how he got me out of that hole,” Chapman said through a translator.

“It’s one of those plays that you don’t see every day,” Chapman said. “Amazing. Exciting.”

Never mind the fans, the Yankees themselves had been electrified by the triple play.

“That’s an energy-giver right there,” Boone said. “You see that kind of a play in that situation where you’re a little bit up against it, they were definitely fired up coming off. You don’t see Chappy very often pumping his fist and smiling.

“That was a special turn by the fellas.”

In stepped the humble Torres, his most recent COVID-19 quarantine behind him.

Torres, who focuses on the at-bat at hand and nothing else, jumped on a first-pitch changeup for his fifth career walkoff.

“Gio, Odor and Voit — amazing,” Torres said. “The second I saw the groundball to Gio, I know something special is coming. I’m super-high after that. That type of play, we come into the home [inning] to hit, and I know this inning was over for us.”

If you were a fan of the swing and miss, if you miss Doc Gooden, aka Doctor K, you couldn’t get enough of Montgomery and Rodon on Friday night.

Montgomery (11 Ks over seven innings) was in complete command, tormenting the White Sox with his best curveball of the season, and the Yankees needed him to be.

“He pitched like a Cy Young [winner] tonight,” Torres said.

Rodon (13 Ks over six innings) was equally impressive with his 98 mph fastball.

Montgomery was Boone’s Savage on the Mound. Torres was his Savage in the Box. None of it would have mattered without his Savages in the Field. A Corey Kluber no-hitter and a triple play inside a week.

“You gotta be able to win these games,” Boone said.