Home » Lifestyle » Starbucks' new spring menu is filled with colorful drinks made with coconut milk, matcha, and ginger. Here's what they all taste like. 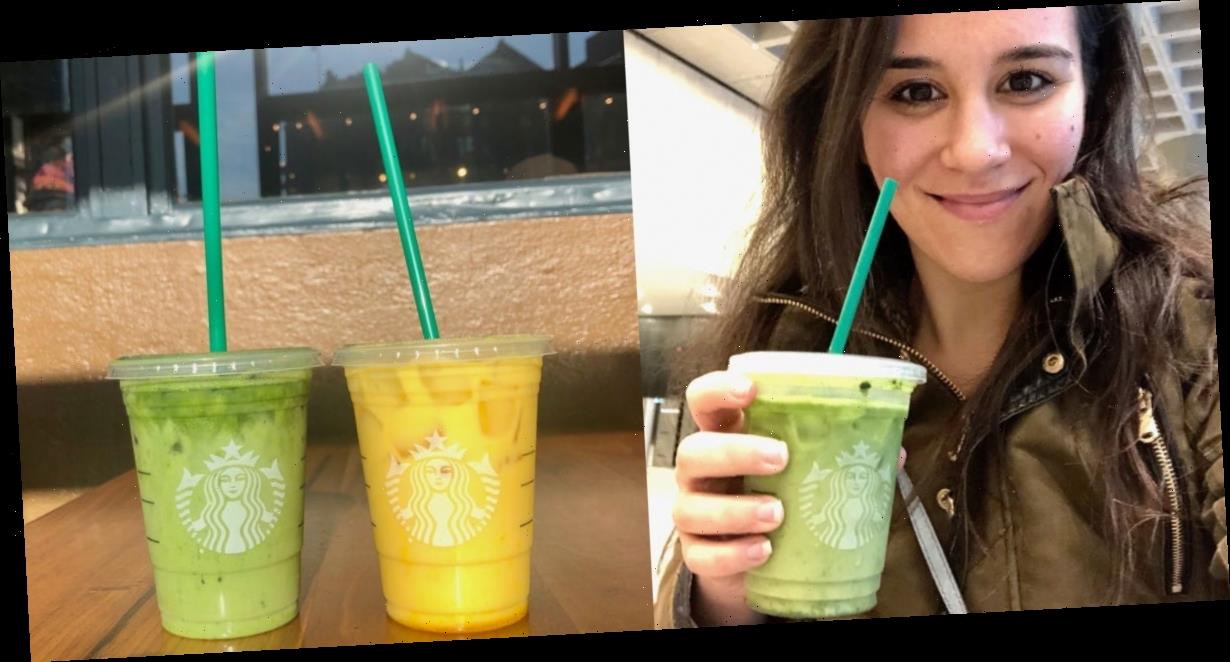 Starbucks' new spring menu is filled with colorful drinks made with coconut milk, matcha, and ginger. Here's what they all taste like.

February has come and gone and Punxsutawney Phil's shadow has disappeared, which can only mean one thing: Spring is finally almost here.

Starbucks is kicking off the new season with two very bright drinks that will almost make you forget you're still wearing a winter coat.

I got the chance to sample Starbucks' Iced Pineapple Matcha drink and Iced Golden Ginger drink, as well as its new breakfast wraps, before they became available nationwide on Tuesday.

Here's what I thought about the newest dairy-free offerings, as well as Starbucks' most filling — and delicious — breakfast options to date.

This spring, Starbucks is all about coconut milk. 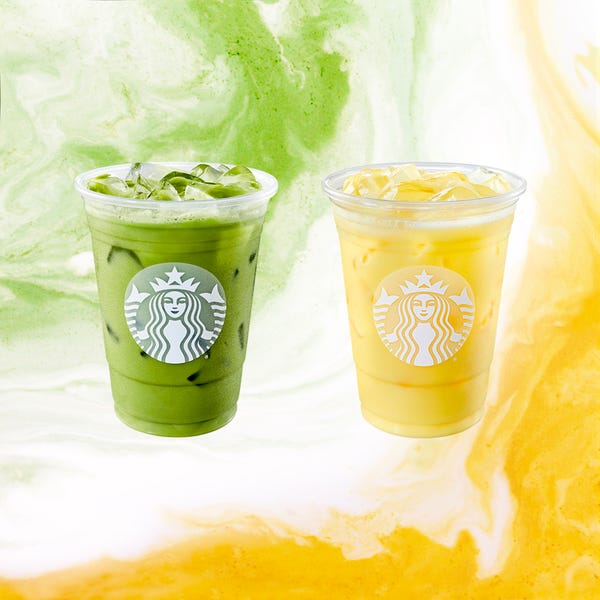 Hot off the heels of its Coconutmilk Latte, which was released in January along with the Almondmilk Honey Flat White, Starbucks is launching two more drinks that contain zero dairy.

The demand for more non-dairy beverages has only increased, a Starbucks spokesman told Insider. So creating new drinks with coconut milk was a natural decision.

Crack open the new, just for you, nondairy #CoconutmilkLatte. ?

I'm already a huge fan of the Coconutmilk Latte. I can usually only handle coffee when it's pretty sweet (aka packed with sugar and calories), so I tend to only buy a Frappuccino or Iced Mocha once in a while as a treat. But the Iced Coconutmilk Latte only has 90 calories, and the coconut milk still keeps it flavorful and sweet.

So, when I heard that both of Starbucks' new drinks were made with coconut milk, I was definitely intrigued.

The Iced Pineapple Matcha drink features Starbucks' matcha green tea, shaken with flavors of pineapple and ginger along with coconut milk and ice. 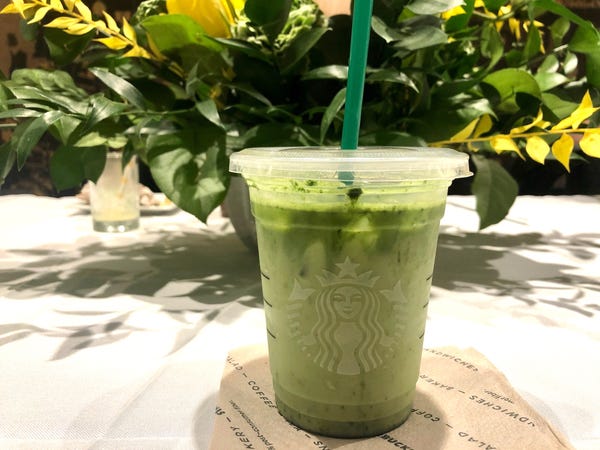 Starbucks' new matcha drink is as beautiful as it looks in the promo pictures. The green is bright and vibrant, as if it was made from a blended avocado. I could see dark green flecks on the top of my cup, and the consistency looked creamy and thick.

I took a whiff and was pleasantly surprised at how fresh the drink smelled. "Renewing" and "energizing" were two of the words the Starbucks spokesman used to describe the drink as the tasting began, and even just the scent seemed to embody them.

I took my first sip, and was surprised at how much I loved the matcha taste. 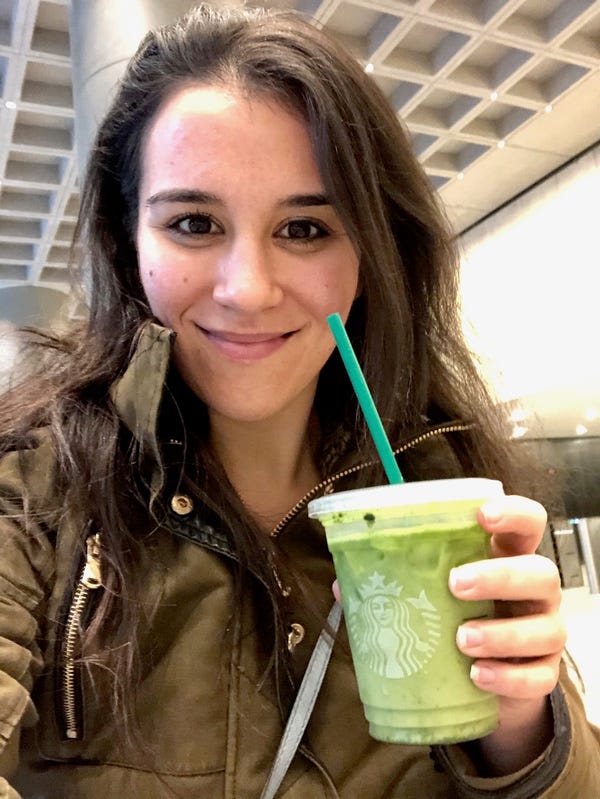 I felt like a bad Californian when I didn't get on the matcha bandwagon back in 2015. I found it was too bitter for my taste, much like kale (am I a bad millennial, too?).

But I didn't think Starbucks' Iced Pineapple Matcha drink was bitter at all. The pineapple lends a nice fruity sweetness and the ginger is subtle, adding some depth without overpowering the taste.

And while the drink looks creamy, I was surprised at how light it tasted. I sucked it down quickly, overjoyed to hear that a Grande has only 170 calories. I was excited at the prospect of adding another sweet but low-calorie caffeinated drink to my weekly regimen.

The Iced Golden Ginger drink features ginger, pineapple, and turmeric flavors and is shaken with coconut milk and ice. 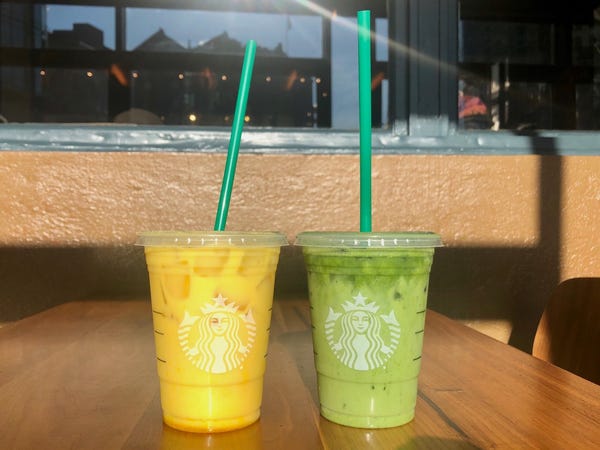 The first thing I wrote in my notes when I saw the Iced Golden Ginger drink was that it looked like a "cup of sunshine." The consistency appeared thick and, as with the Iced Pineapple Matcha, I initially expected it to taste creamy.

Much like the non-dairy drinks, Starbucks has seen consumers gravitating toward ginger and wanting to use it in different ways, a spokesman told Insider. The company thought it would be the perfect flavor to create another refreshing drink for spring.

The Iced Golden Ginger drink definitely has a kick. 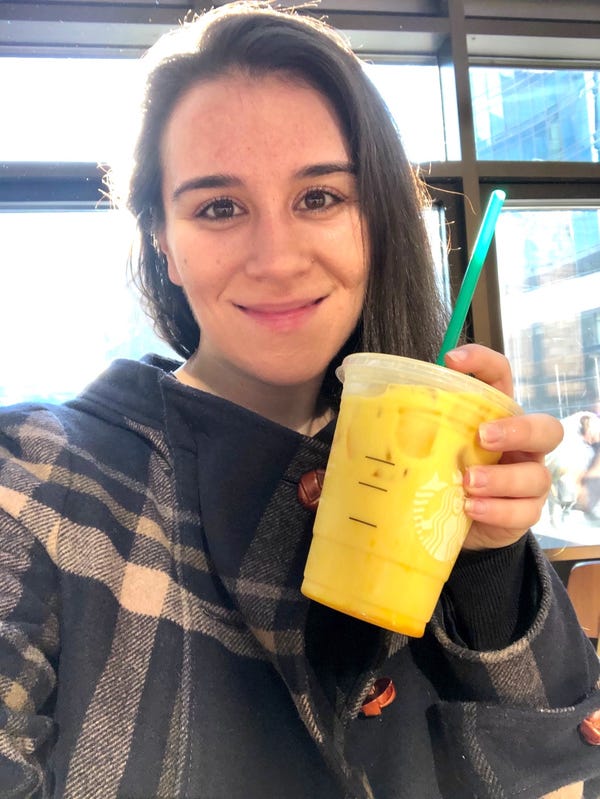 The ginger and turmeric flavors make their presence loudly known in this drink, and are far stronger than the subtle ginger taste in the Iced Pineapple Matcha.

Like the matcha drink, the Iced Golden Ginger was also a lot lighter than I had expected. Their consistencies are far more akin to the Pink Drink rather than a Frappuccino, as I had suspected at first glance. And with 140 calories in a Grande, it's one of Starbucks' healthier drink options.

The Iced Golden Ginger is definitely something I would pick up when I feel a cold coming on, but the Iced Pineapple Matcha was easily my favorite. 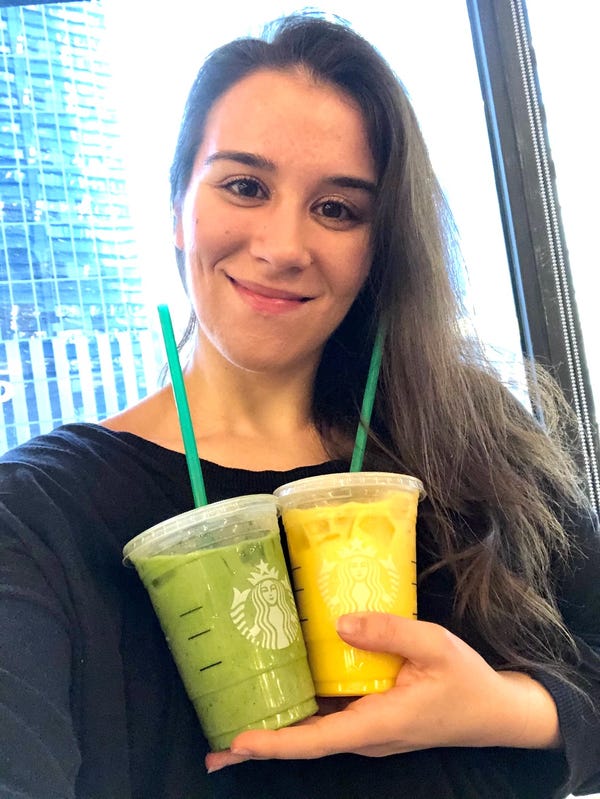 Prices for a Grande Iced Golden Ginger drink or Iced Pineapple Matcha drink range from $4.95 to $5.75.

For those who like their coffee extra strong, Starbucks has also released a new Cold Brew and Nitro Cold Brew with Salted Honey Cold Foam. 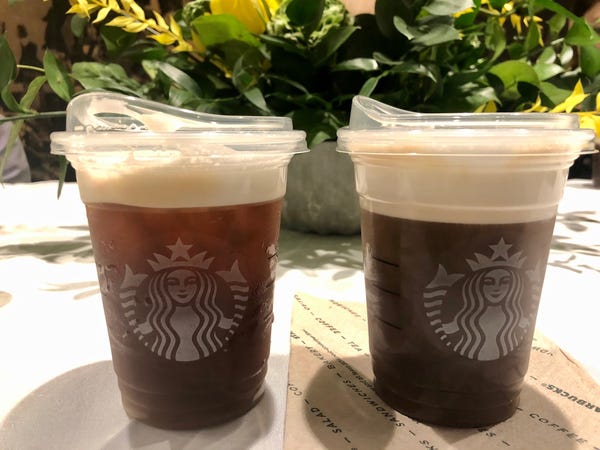 Both drinks also feature a sprinkle of toasted honey on top.

Prices for a Grande Cold Brew or Nitro Cold Brew with Salted Honey Cold Foam range from $4.95 to $5.45.

I was a huge fan of Starbucks' Irish Cream Cold Brew — which was released for the holidays — so I was super excited to try these new drinks. 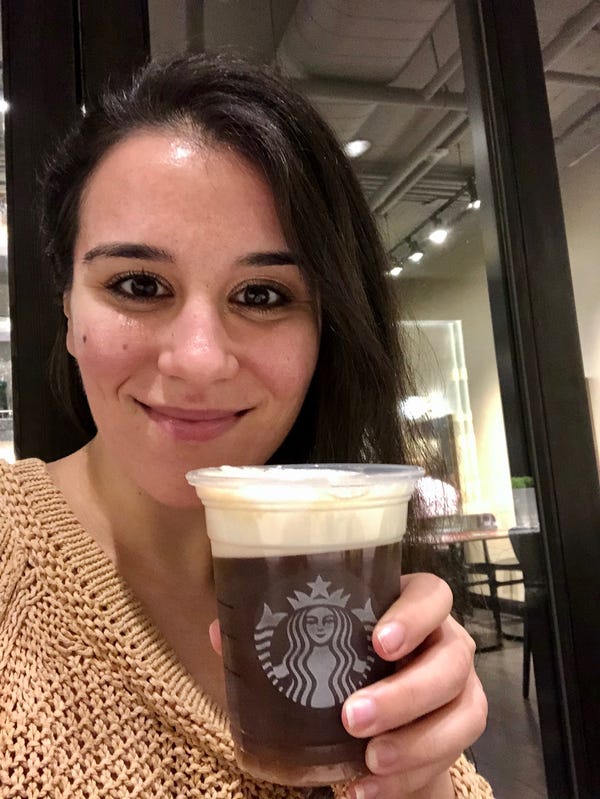 But alas, I have to admit that my coffee palette was too weak for these strong drinks.

The new brews are almost like a Southern sweet tea, while the toasted honey lends a nice smokiness to their slightly bitter flavor. The Nitro Cold Brew, which has been infused with nitrogen and steeped for more than 20 hours, has more of a velvety texture than the Cold Brew and less of that tea taste. And while the Cold Brew looks almost red, the Nitro is dark brown.

While I'm a bit too weak for these drinks, I feel like caffeine lovers will like the lighter cold brew flavors. 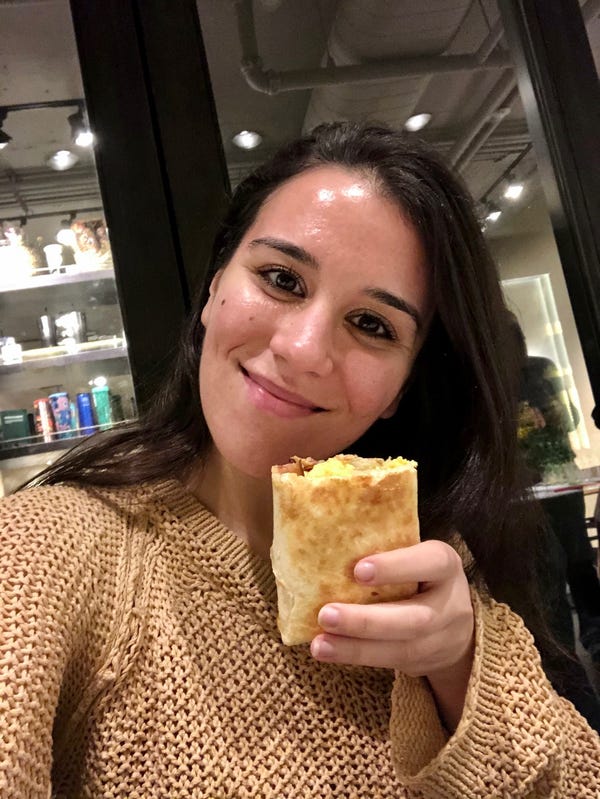 Both of the wraps are bigger than anything Starbucks has previously released on its breakfast menu, measuring at six to seven inches each.

Based on traditional omelettes, they come packed with protein (more than 20 grams each), and plenty of toppings. 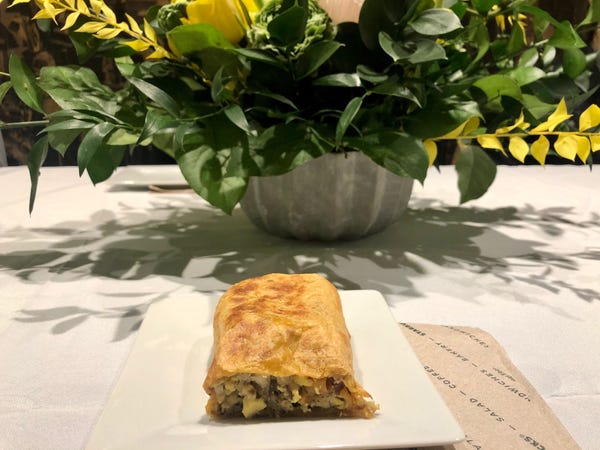 While I love my coffee sweet, I am far more savory when it comes to breakfast food. So I was excited to hear that Starbucks was expanding its menu with more wraps (previously it only offered a Spinach, Feta, and Egg Wrap).

The Southwest Veggie Wrap was my favorite of the two. 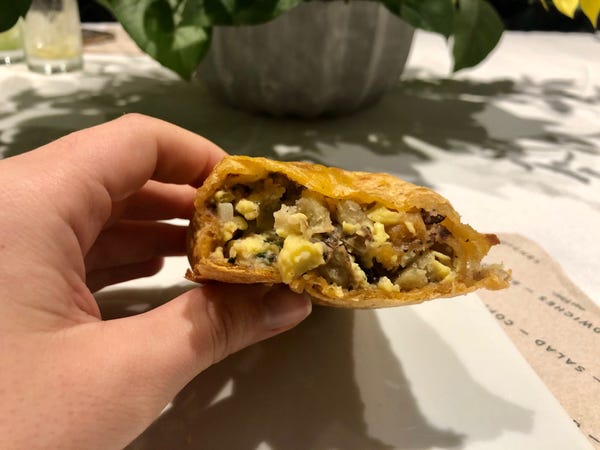 The eggs were as fresh and creamy as a great scramble, and the potatoes gave everything a really nice crunch.

The salsa tortilla was also delicious — adding a bit of a kick — and had a great crisp to it. Even just half of the wrap had me feeling satisfied, but the ingredients didn't make me feel heavy or bloated after.

With 24 grams of protein — and 580 calories — the Southwest Veggie Wrap could easily make a great lunch option as well. 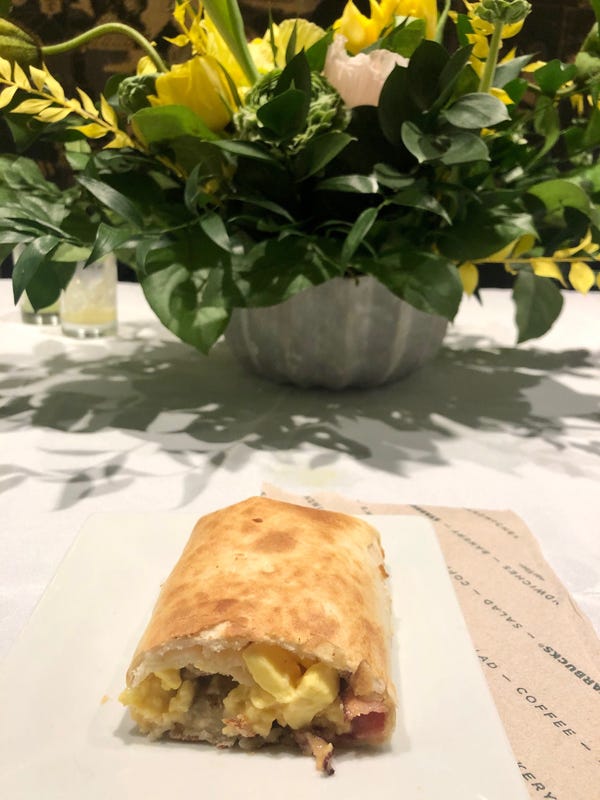 This wrap instantly reminded me of a breakfast omelette from a quality diner. There was plenty of crispy bacon to go around, the eggs were nicely cooked, and the potatoes were well-seasoned (although I'm not sure if the very-packed wrap needed them).

The Bacon, Sausage, and Egg Wrap is heavier than the veggie version. 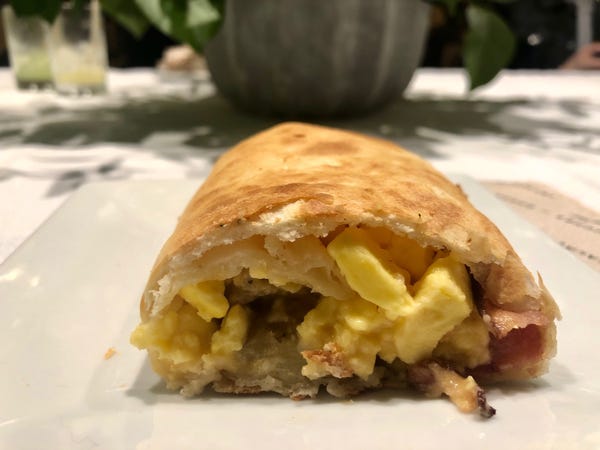 The wrap is packed with 27 grams of protein and contains 650 calories. I personally prefer lighter breakfasts in the morning, but this wrap would be a great option for someone who wants to fill up before a long flight (or has a hangover that they're trying to fight).

Prices for both the Southwest Veggie Wrap and the Bacon, Sausage, and Egg Wrap range from $5.45 to $5.95.