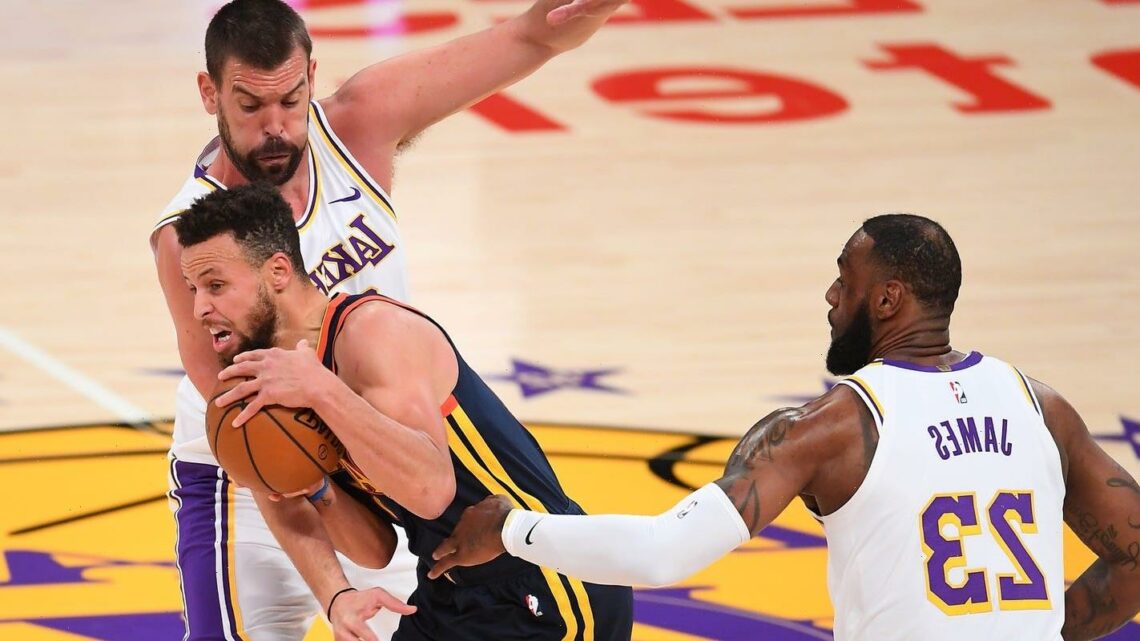 Los Angeles Lakers star LeBron James touted Curry to win the NBA’s regular-season MVP after finishing the 2020-21 season as the league’s scoring leader (32.0 points per game) while also leading the league in 3-pointers (337). A good number of Warriors fans, however, did not hear praise when James argued that “Steph has had, in my opinion, the best season all year.” Instead, they determined James had ulterior motives, including some possible gamesmanship for when the Lakers host the Warriors in the NBA’s play-in tournament on Wednesday at Staples Center.

“I love no matter if it’s him, it’s me, whoever it is, there’s always another element of analytics or analyzing what we say, how we say it or when we say it,” Curry said after practice Tuesday. “‘Bron’s no stranger to that. Neither are we.”

“He (LeBron) knows when he says something, people pay attention, so for him to speak on my MVP candidacy, respect him for it. I appreciate it.”

The scrutiny partly has to do with Curry and James having so much history with each other. After James returned to the Cleveland Cavaliers, they faced the Warriors in four consecutive NBA Finals (2015-18). The Warriors won the first matchup in 2014 before James helped the Cavaliers a year later become the first NBA team in Finals history to overcome a 3-1 series deficit. The Warriors then acquired Kevin Durant to complement Curry, Klay Thompson and Draymond Green, which led to two consecutive NBA titles before James signed with the Lakers as a free agent.

And now Curry and James are about to square off in a pivotal game under a different setting. The winner of Wednesday’s game will secure the No. 7 playoff seed and face the second-seeded Phoenix Suns. The loser will play another play-in game against the winner of Wednesday’s game between the San Antonio Spurs and the Memphis Grizzlies on Friday, which will then determine who will face the top-seeded Utah Jazz as an eighth seed.

Contrary to what some Warrior fans may think, Curry said he does not view James’ compliments with suspicion.

“Obviously I’m appreciative that he knows when he says something, people pay attention,” Curry said. “So for him to speak on my MVP candidacy is definitely, I respect him for it and I appreciate it.”

But if James had hoped his praise would butter Curry up, apparently that approach will be as effective as when most opponents try to stop Curry from making a 3-point shot.

“We all know as competitors, though, when the lights are on, I can talk about how great he is until I’m blue in the face and he can do the same, it doesn’t change how we approach that competition when we’re out there,” Curry said. “I won’t be giving him a pass because he likes the way I play this year and vice versa.”

Neither will the Lakers, whom Warriors coach Steve Kerr believes will “throw the kitchen sink” at Curry.

It remains to be seen what that defensive tactic will entail. Although the Lakers have experience in last year’s playoffs defending elite point guards, including Portland’s Damian Lillard and former Houston Rockets guard James Harden, Lakers coach Frank Vogel noted those schemes are different since each of those sharpshooters have different tendencies. While Harden and Lillard operate on more isolation and pick-and-roll plays, Curry gets his shots on and off the ball.

“Always keep an eye on him,” Lakers forward Anthony Davis said of Curry. “He’s most dangerous when he’s off the ball. He always flying around. Usually when a guy gives the ball up, the defensive player tends to relax. That’s when he’s most dangerous. So we got to make sure we keep an eye on him and make sure we stay locked in on him at all times.”

With Curry fulfilling this job description all season without Thompson and a mostly inexperienced roster sans Green, Warriors assistant coach Bruce Fraser told USA TODAY Sports recently that “this year is proof that he can help carry a team.” Curry told USA TODAY Sports recently that “wasn’t ever a narrative that I felt I needed to squash” before touting his offseason work both at the Warriors’ practice facility and in sessions with personal trainer Brandon Payne that focused on adding seven pounds of muscle. Payne told USA TODAY Sports those sessions included working on his footwork around the rim, completing contact-heavy ball-handling drills and working on his balance during shooting drills.

“It goes back to the work I put in,” Curry reiterated following Tuesday’s practice. “It’s undefeated in terms of how I feel about my game and my ability to adapt to different situations.”

Because of those abilities, Lakers forward Kyle Kuzma described Curry “as somebody that could potentially be the MVP of the NBA season.” Lakers guard Dennis Schröder added that Curry is “capable of winning by himself if he wants to.”

Are Lakers are simply admiring Curry’s greatness. Or are they buttering him up leading into Wednesday’s game? Warriors fans will continue to debate.

“It’s great for the entertainment value of what we do,” Curry said. “I kind of love the chatter because it’s hilarious and awesome all at the same time. It’ll make for a great show tomorrow.”

The Voice Semi-Finals Results-Show Recap: The Final 5 Revealed… Though We Kinda Only Needed a Top 2
Recent Posts