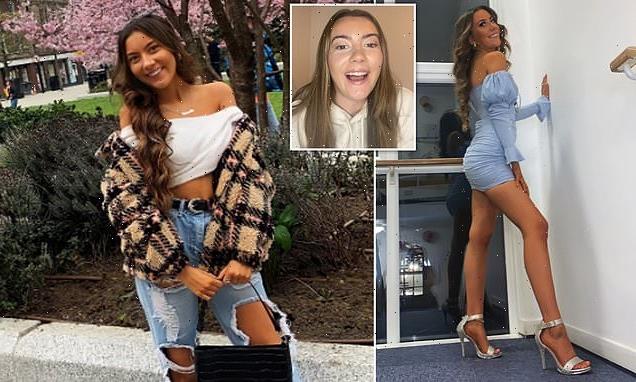 Student born without part of her vagina reveals boyfriend betrayed her

A student who was born without two thirds of her vagina claims her ex-boyfreind betrayed her by telling her entire university halls about her condition.

Annabelle Astley from Frodsham, Cheshire, was 16 when she was diagnosed with Mayer-Rokitansky-Küster-Hauser (MRKH) syndrome – meaning she has no uterus, only the first third of her vagina and will never have a period or be able to carry her own children.

The 19-year-old had to endure an ‘extremely painful’ dilation treatment to stretch her vaginal canal, a process that women with the condition often must undergo to be sexually active with a man. 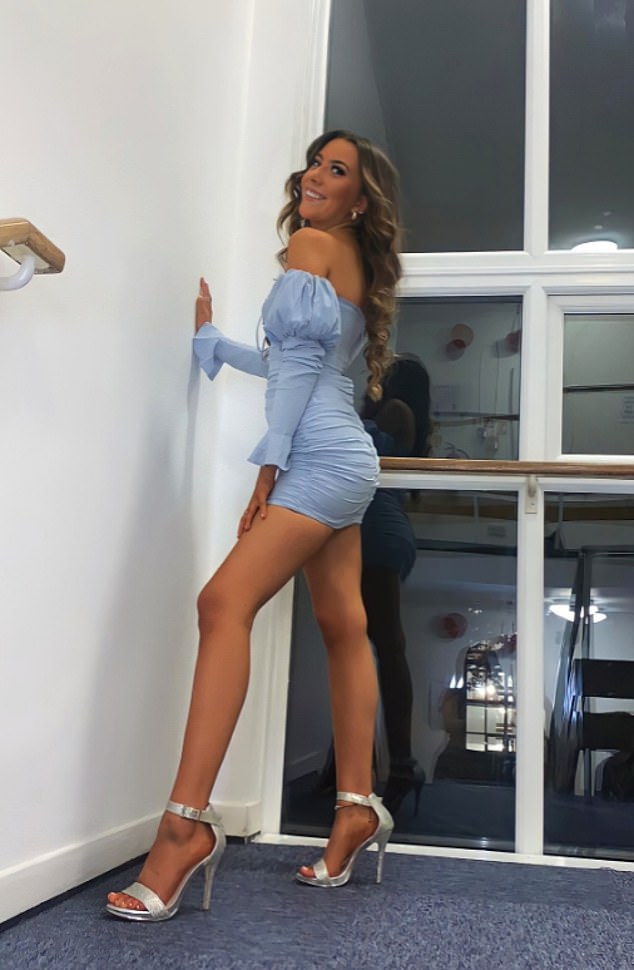 Annabelle Astley, 19, was born with Mayer-Rokitansky-Küster-Hauser (MRKH) syndrome but was ‘mortified’ when her first boyfriend reportedly told everyone in her university halls

But after the musical theatre student finally opened up to her first boyfriend and slept with him, she was ‘mortified’ to discover that he reportedly ‘told all 350 people’ in her accommodation about her MRKH.

After overcoming this ‘huge shock’ Annabelle claims she’s now ‘thankful’ for his betrayal because it has enabled her to speak openly about her condition and she now promotes awareness by sharing TikTok videos about it.

Annabelle, who is now single again, regularly shares informative videos about MRKH with her 13,700 followers in a bid to raise awareness and has been ‘overwhelmed with the positive support she’s received online.

‘It’s made me a million times stronger as a person to the point I can talk so openly and freely about it.

‘If he hadn’t had done that no one would know about it and I wouldn’t have shared it on TikTok – I’ve already had about 15 girls with the same condition message me – it’s amazing. 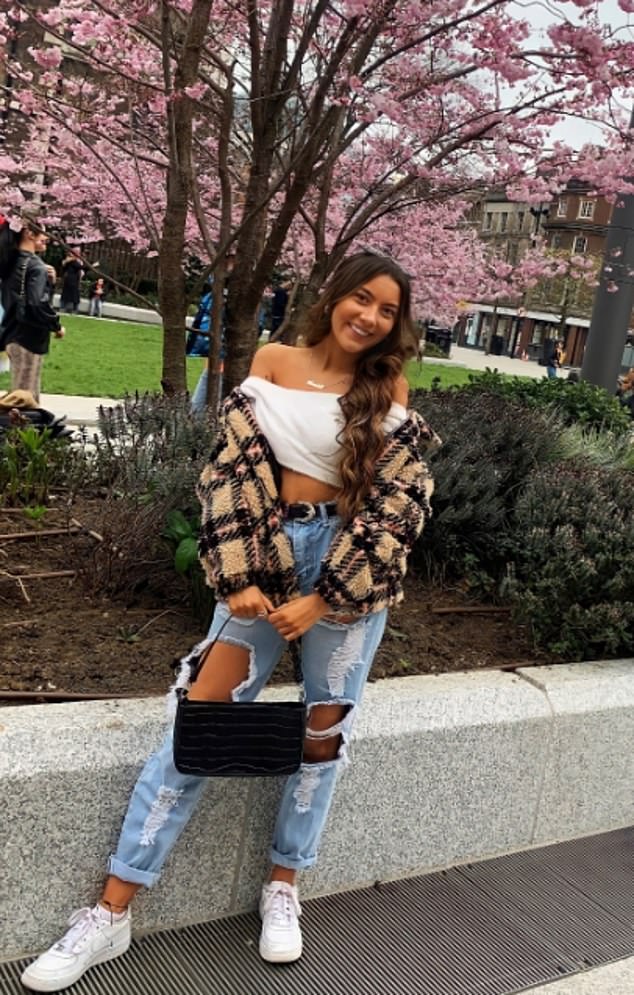 The condition means the musical theater student has no uterus, only the first third of her vagina and will never have a period or be able to carry her own children

‘Because I’d lost so much control about the situation and I wouldn’t leave my room for a couple of weeks during that time I was thinking “maybe I do need to start raising awareness about it”.

‘I thought “you know what – it’s out now, I might as well start opening up about it” and thought TikTok might be a good way to do that.’

Annabelle was diagnosed in December 2017 – two years after she went to hospital with suspected appendicitis and an ultrasound revealed there may be something blocking her uterus.

Despite being born without a uterus Annabelle fortunately still has her ovaries which means she could have a biological child of her own through IVF with a surrogate or a womb transplant which is an up-and-coming treatment in America. 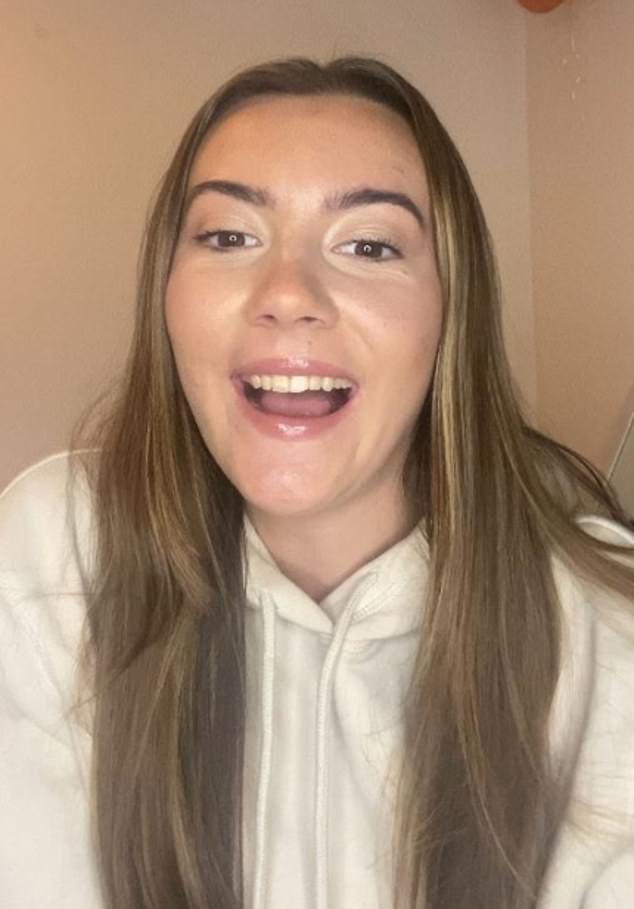 Now, the brave teen from Frodsham, Cheshire, promotes awareness about MRKH syndrome by sharing informative videos about the rare condition on TikTok

Annabelle said: ‘The first thing she [the doctor] said to me was “you’re born without a uterus” and she went on to tell me what that actually meant, so no periods or having kids and that’s when it really hit me – I think I just dropped to the floor crying.

‘First I think it was utter shock and disbelief and seeing my family upset was really hard.

‘Whenever I say !I don’t get a period” most women say “you’re so lucky” but actually anyone with MRKH would say the same thing that all we want is to experience having a period.

‘I felt like because I didn’t get a period that I wasn’t a ‘normal girl’ and I didn’t fit in with my friends anymore.

‘Being in situations with friends when they’d all start talking about periods or having kids that’s a humongous trigger for me and I do have to leave the room straight away.’ 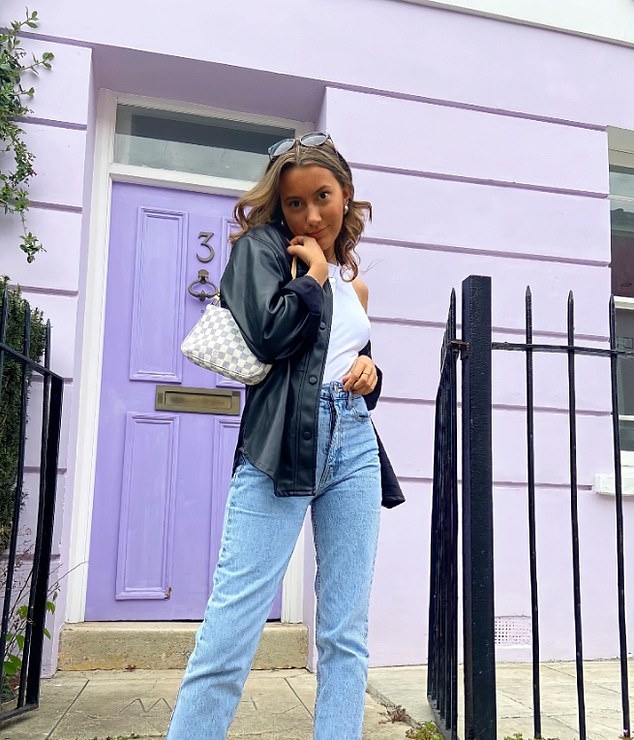 Annabelle was 16-years-old when she was diagnosed with MRKH syndrome and said that when it hit her what that meant, she ‘dropped to the floor crying’

Annabelle said dilation involves using different sized tubes for 30 minutes every day in order to stretch the vaginal canal – a treatment that is often used to enable those with the condition to have sex.

She said the length of time it must be done depends on the individual as some may do it for six months while others can be up to three years.

She claims there is no other treatment available apart from counselling.

The teen said she began shortly after discovering she had MRKH but decided to ‘let the diagnosis sink in’ first and later tried again after getting into a relationship with her ex boyfriend.

Annabelle, who hopes to work in the TV and film industry, said: ‘It’s extremely painful because you have to force it and put a lot of pressure on it in order to stretch.

‘I did it for five minutes the first few times and the longest I ever did it for was about 12 minutes. 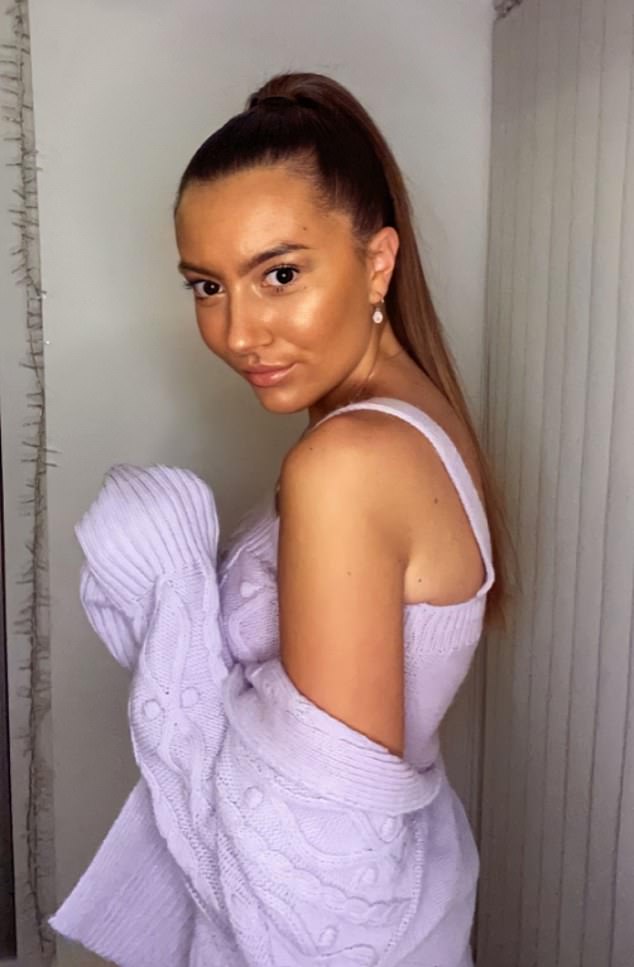 She had to endure an ‘extremely painful’ dilation treatment to stretch her vaginal canal, a process that women with the condition often must undergo to be sexually active with a man

‘I found that then the next day I wasn’t actually able to dance because I was in so much pain.

‘Being sat in your bed and being forced to do it is just horrible – I tried watching TV, listening to music but I couldn’t find anything that made me want to do it.’

The student said she shared her condition with her first partner since being diagnosed, which was the first boy she’d actually told but claims she was distraught to discover he’d betrayed her trust when she returned to halls in February.

Annabelle says everybody in her halls suddenly knew about her condition and, while her boyfriend denied telling anyone, he was the only one who knew so she knows it could have only come from him and then spread by word of mouth.

Annabelle said: ‘Coming back and finding out that people I didn’t even know knew was really hard and I was mortified – I couldn’t leave my little dorm room for two weeks as I was so upset.

‘It was a huge shock especially considering I had opened up to him so much about it. 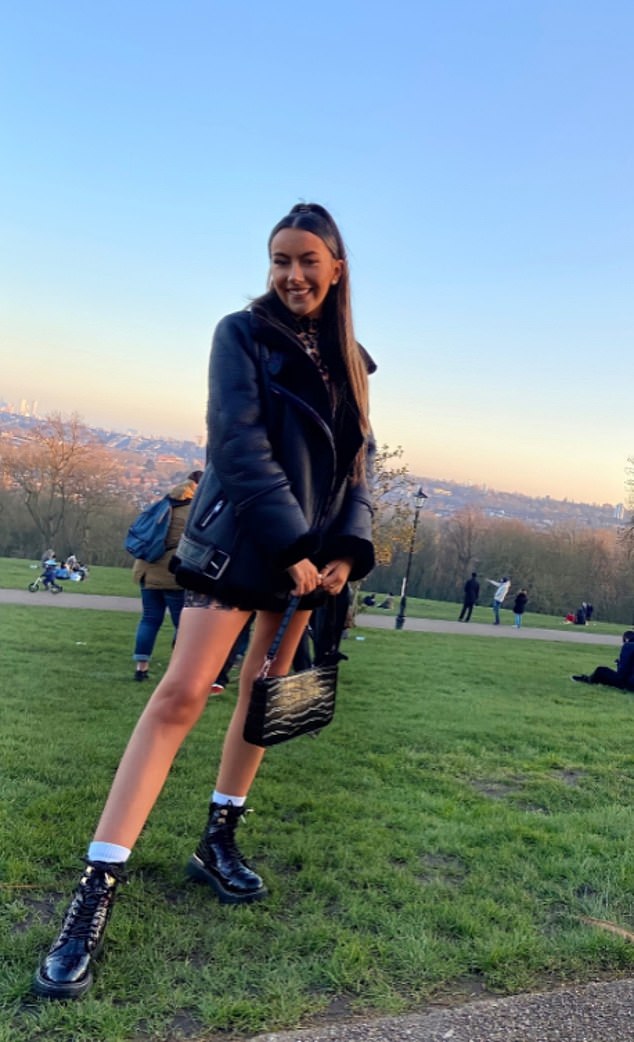 ‘We were talking about being honest with each other and I said “well, there is something I do need to tell you” – it must have taken me 45 minutes to actually get it out.

‘I think any girl with MRKH’s biggest fear is telling their partner at the time that they have it because you’re so frightened that they’re just going to be like “I’m not going to be with you because of that”.

‘He was actually so supportive and I came back and felt a bit like a laughing joke that he’d been running the halls being like “oh yeah, she’s got this and this”.

‘He was the first person I had slept with and I’ve not been with anyone since.

‘I hope things will be different with my next partner – hopefully I’ll have the courage to tell him.’

Despite this ‘completely knocking her confidence’, Annabelle is passionate about raising awareness of MRKH and now regularly posts about her condition on TikTok – and her first video has racked up nearly a million views. 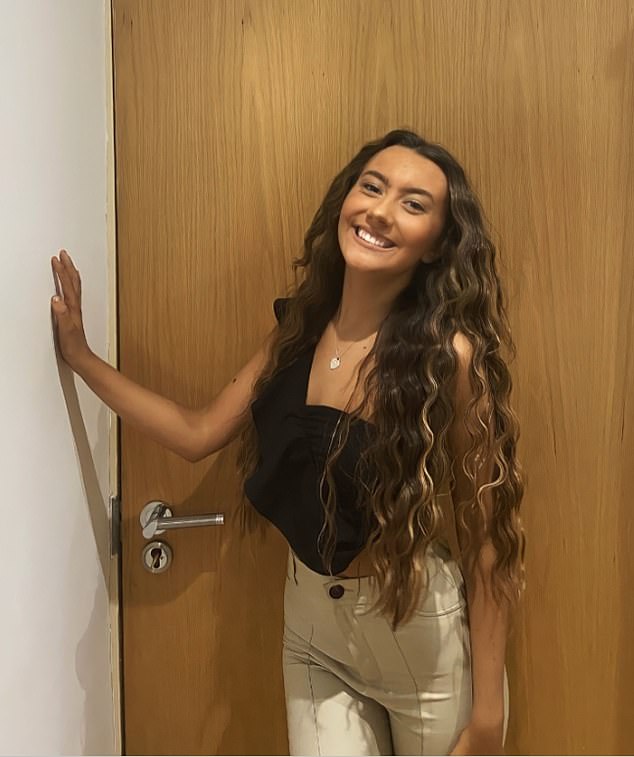 However, despite her ex-boyfriend ‘completely knocking her confidence’, she is passionate about raising awareness of MRKH and has received huge amounts of support online

Annabelle said: ‘At first it was quite scary I remember I posted it and it was just going up and up with hundreds of views every second and I just burst into tears – I was so overwhelmed by it.

‘After that I thought “wow, maybe I could actually start raising-awareness about it on TikTok” and take back control.

‘Nobody has heard about it – even to the point I’ve had a doctor say “what do you mean you don’t get a period?” and I said I have a condition called MRKH and I’ve literally had them say to my face “well I’ve never heard of that, are you sure you haven’t made it up?”

‘I’ve had some really weird comments. People have asked “what’s a uterus?” I’ve had loads of “so are you a boy?” and “does that mean you’re transgender then?”

‘Hundreds of people who I don’t know write the most supportive comments and so many girls with the same condition have come forward who I’ve made friends with – it’s just amazing.’

WHAT IS MAYER ROKITANSKY KUSTER HAUSER?

Rokitansky Syndrome, or MRKH (Mayer Rokitansky Küster Hauser), is a congenital abnormality characterised by the absence of the vagina, womb and cervix.

Women suffering from the condition will have normally functioning ovaries, so will experience the normal signs of puberty – but will not have periods or be able to conceive.

The external genatalia are completely normal which is why MRKH isn’t usually discovered until women are in their teenage years.

Rokitansky Syndrome, or MRKH (Mayer Rokitansky Küster Hauser), is a congenital abnormality characterised by the absence of the vagina, womb and cervix

Many women are able to create a vaginal canal using dilation treatment, which uses cylinder shaped dilators of different sizes to stretch the muscles.

However, if this is unsuccessful then surgery will be used to stretch the vaginal canal.

Following treatment women are able to have intercourse and can have their eggs removed and fertilised to be used in surrogacy. However, those without ovaries won’t ever be able to have children because they don’t produce any eggs.

It affects one in 5,000 live female births, according to an 1985 article in the Journal of Reproductive Medicine.

How To Start Using Colorful Eyeliner In Your Everyday Makeup Look