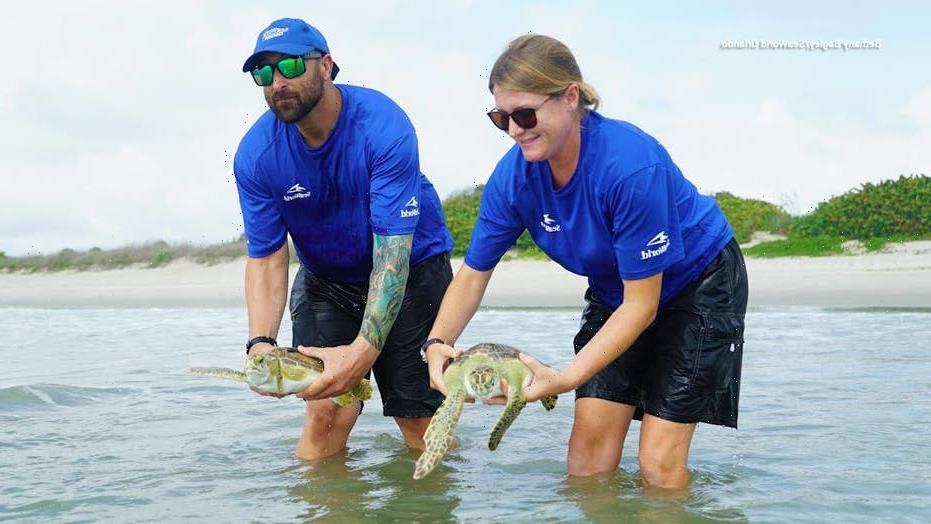 Rescued sea turtles returned to the ocean on Florida beach

Following months of care, the SeaWorld Rescue team has returned five sea turtles to the ocean at Pineta Beach, Fla.

“Ghost nets” from unknown origins drift among the Pacific’s currents, threatening sea creatures and littering shorelines with the entangled remains of what they kill.

Lost or discarded at sea, sometimes decades ago, this fishing gear continues to wreak havoc on marine life and coral reefs in Hawaii.

Now, researchers are doing detective work to trace this harmful debris back to fisheries and manufacturers — and that takes extensive, in-depth analysis on tons of ghost nets.

The biggest concern is that derelict gear keeps killing fish and other wildlife, such as endangered Hawaiian monk seals, seabirds and turtles long after it’s gone adrift, said Drew McWhirter, a graduate student at Hawaii Pacific University and one of the study’s lead researchers.

“These nets bulldoze over our reefs before they hit shore,” McWhirter added. “They leave a path of destruction, pulling coral heads out, and can cause a lot of ecological damage.” 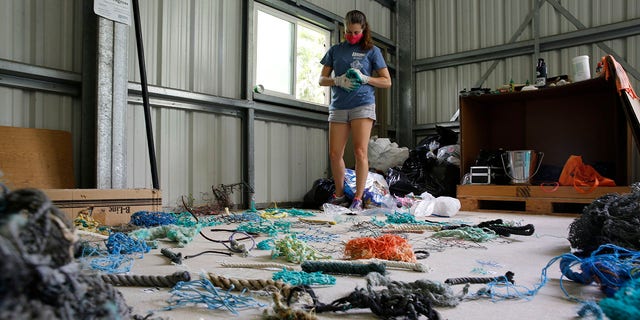 Jennifer Lynch, a research scientist at the National Institute of Standards and Technology and the co-director of Hawaii Pacific University’s Center for Marine Debris Research, catalogs pieces of ghost nets on Wednesday, May 12, 2021, in Kaneohe, Hawaii. Researchers are conducting a study that will attempt to trace derelict fishing gear that washes ashore in Hawaii back to the manufacturers and fisheries that it came from. (AP Photo/Caleb Jones)

Ghost nets foul oceans throughout the world, but the Hawaiian Islands — with the Great Pacific Garbage Patch to the east and another gyre of floating trash to the west — are an epicenter for marine waste.

Past efforts to identify origins of nets have proven difficult because debris comes from so many countries and nets have few, if any, unique identifying marks or features.

Experts believe many nets are lost accidentally, but boats occasionally ditch nets to avoid prosecution when fishing illegally. Other fishermen cut away portions of damaged nets instead of returning them to shore.

The ghost net study is being supervised by Hawaii Pacific University’s Center for Marine Debris Research co-director, Jennifer Lynch, a research biologist with the National Institute of Standards and Technology.

“We’re going to have a very challenging time … trying to identify it back to its source,” said Lynch. “And if we fail, … that’s going to be increased evidence for policymakers to see the importance of gear marking and potentially bring those kinds of regulations to the front.” 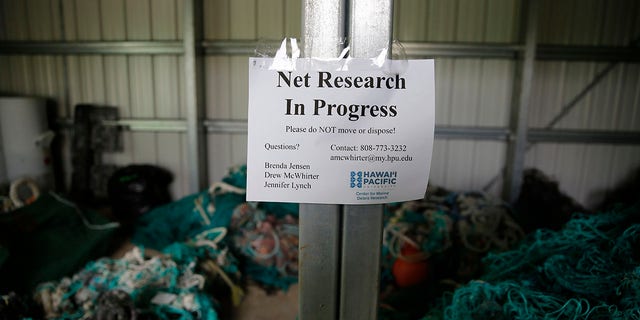 Ghost nets and other debris sit in a shed at Hawaii Pacific University’s Center for Marine Debris Research on Wednesday, May 12, 2021, in Kaneohe, Hawaii. Researchers are conducting a study that is attempting to trace derelict fishing gear that washes ashore in Hawaii back to the manufacturers and fisheries that it came from. (AP Photo/Caleb Jones)

For Lynch, it’s not about pointing fingers. Rather, she hopes the study, which will be presented to the fishing industry first, will help develop new ways to prevent damage to the marine environment.

“We’re doing this study in a very forensic way where we’re gathering as much evidence as we possibly can so that we can present the best, most accurate story,” Lynch said.

The crew gets ghost nets from three sources: The main Hawaiian Islands, the fishing grounds of the Hawaii longline tuna fleet that often snags nets — and the shores of the uninhabited Northwestern Hawaiian Islands, which are part of Papahanaumokuakea National Marine Monument.

An April cleanup expedition to Papahanaumokuakea — the largest protected environment in the United States and a UNESCO World Heritage Site — brought back nearly 50 tons (45 metric tons) of nets and other lost gear.

In a shed on the university’s campus, researchers pull apart bundles of fishing gear, noting the relationships between items. Then samples are taken to a lab for analysis.

“We only really need a small sample here to really understand how it’s constructed,” said Raquel Corniuk, a research technician at the university. 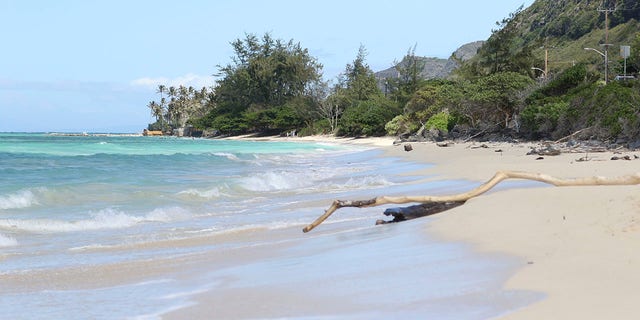 Waves wash ashore in Waimanalo, Hawaii, on Wednesday, May 12, 2021. Researchers at the nearby Hawaii Pacific University’s Center for Marine Debris Research are conducting a study that will attempt to trace derelict fishing gear that washes ashore in the islands back to the manufacturers and fisheries that it came from. (AP Photo/Caleb Jones)

Researchers look at about 70 different aspects of each piece of net, including its polymer types. “We look at how it’s twisted. Is it twisted versus braided? We are trying to look at how many strands does it have, its twine diameter, mesh stretch size,” Corniuk said.

The information is entered into a database, which will help scientists find patterns that could lead to manufacturers and eventually individual fisheries or nations.

The researchers have spent about a year collecting data and hope to have findings peer reviewed and published this year.

Among the ghost gear are fish aggregation devices — or FADs — floating bundles of material fishing vessels leave in the ocean to attract fish. The devices have receivers linked to satellites, but when they drift outside designated fishing areas, they’re usually abandoned.

Mike Conroy, president of West Coast Fisheries Consultants, works with purse seine and gillnet operators off California. He said FADs are prohibited in U.S. waters and that fishers do everything they can to prevent loss of nets.

“An average one of those nets is going to run the operator somewhere between 150 and 250 grand,” he said. 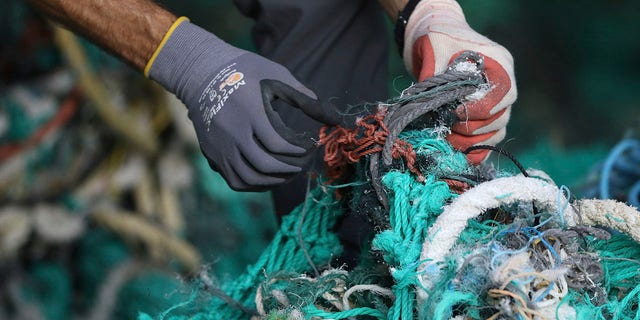 Drew McWhirter, a graduate student at Hawaii Pacific University’s Center for Marine Debris Research, pulls apart a massive entanglement of ghost nets on Wednesday, May 12, 2021, in Kaneohe, Hawaii. Researchers are conducting a study that is attempting to trace derelict fishing gear that washes ashore in Hawaii back to the manufacturers and fisheries that it came from. (AP Photo/Caleb Jones)

Conroy acknowledged ghost gear is a problem. “These types of research activities will point the finger in the right direction,” he said. “I think what you’ll see is that West Coast fisheries probably aren’t contributing much.”

The researchers have already found debris from all corners of the Pacific, including Asian countries and the U.S. West Coast.

Much of the ghost net problem lies with less developed nations that have few fishing regulations and sometimes buy or manufacture low-quality nets, according to a career fisherman who now works for a net manufacturer in Washington state.

“Their products tend to be weaker,” said Brian Fujimoto, a sales executive for NET Systems Inc., in Bainbridge Island. “And if you look at the poly netting and ropes that you’re finding, they’re all very inexpensive stuff.”

Fujimoto said his company uses technology, colors and other construction techniques unique to their products, so they’re easily identifiable.

Making that an industry standard, he said, is “only going to happen with the more industrialized nations, say for example, the U.S., Canada, Japan.” 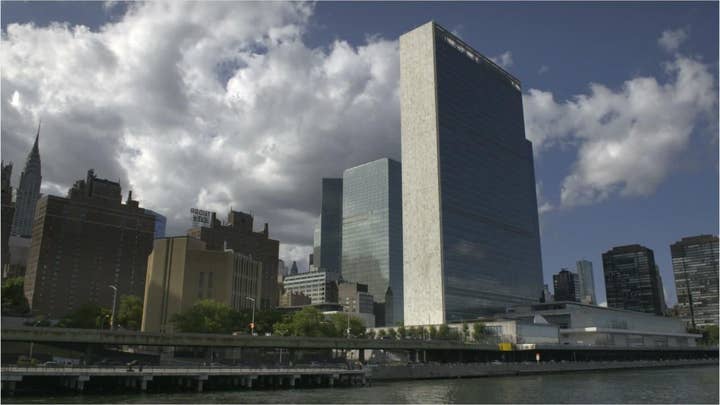 Daniel Pauly, a marine biologist and professor at the University of British Columbia’s Institute for the Oceans and Fisheries, said, “We kill fish for fishing and for consumption, but these fish that are killed by lost gear are killed for no reason, not to mention the marine mammal and turtles and other animals that we like.”

“Clamping down on this loss, which is too easily accepted, … is a good thing,” added Pauly.

Jonathan Moore, principal assistant secretary of the Bureau of Oceans and International Environmental and Scientific Affairs at the U.S. State Department, said last year, “Illegal, unreported, and unregulated fishing, which is sometimes associated with ghost gear, is among the greatest threats to the sustainable use of our shared ocean resource.”

“Certainly, gear-marking guidelines and regulations should be a central pillar of all responsible fisheries management operations,” he said.

Although U.S. and some international laws require identifying markers on some fishing gear, such as crab pots and buoys, nets are not required to be marked.

Officials with the National Oceanic and Atmospheric Administration’s fisheries division declined to be interviewed for this story, but said in an email: “NOAA Fisheries is unaware of any regulations that have been, or are being considered, with regard to ghost nets. We continue to work agency-wide on this international marine debris problem.”

Devin Haney vs Jorge Linares: When is lightweight title fight and what time does it start in the UK?
Recent Posts