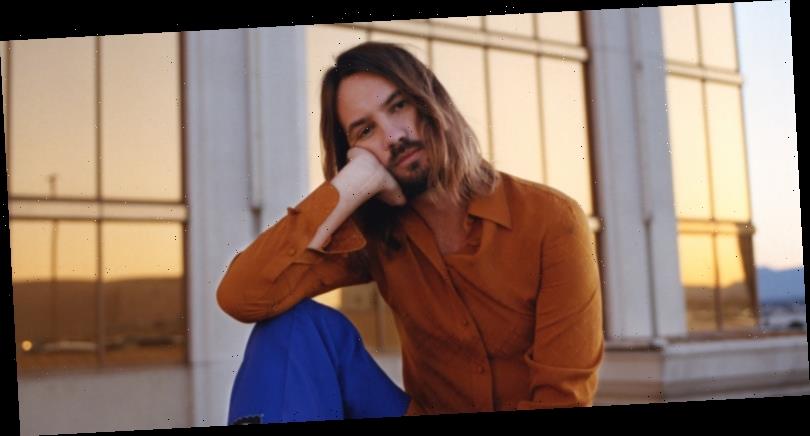 Kevin Parker, who goes by the musical moniker Tame Impala, is feeling unusually positive about his new album, The Slow Rush, which dropped just over two weeks ago.

After the release of the previous Tame Impala records Currents and Lonerism, he felt despondent, and wanted to bury his head in the sand. The pressure was agonizing, and he didn’t want to talk about it, let alone listen to the music again.

This time, though, things are different. Parker’s not sure whether it’s due to the fact that he recently moved from Perth, Australia, to Los Angeles, where positivity and encouragement are societal standards, or because he’s slowly settling into his life as a newlywed in a new home. But there’s something afoot.

He even did something quite out of the ordinary, and listened to part of The Slow Rush a couple of days ago. He was scheduled to do a Spotify session, which calls for him to commit the extremely exposing act of sitting down with someone with the files from the recording session from the album open, taking apart various bits of each song. To be clear, this is something he rarely does. It’s incredibly awkward to listen to music he’s made until many, many years have passed. But this time around, he was down for it. And it wasn’t as painful as he assumed it might be.

“I thought, I may as well listen to the album and refresh my memory of what I was feeling when I wrote this bass line, and what I was intending when I did this drumbeat. It was cool,” he said, giggling to himself from a hotel in Las Vegas. “It was good. I liked it; it was mostly functional, but I enjoyed it.”

Parker, 34, is largely finished with the post-album madness and had some time to reflect on the experience. He is now moving on to prepare for the largest and most expansive tour he’s ever been on—with shows in Mexico, New Zealand, England, and throughout the United States, in addition to stops on the summer music festival circuit at Governors Ball and Bonnaroo. He’s in Vegas finalizing the visuals and lights for his performances. He doesn’t have any pre-tour rituals—apart from being in what he describes as a “mad rush,” to get his everyday life in order.

“There’s all this shit that I was supposed to do before I left,” he said. “My studio is just empty while I’m not there, so I’ve got to be like, ‘Okay, what’s going to light on fire if I leave this room and I don’t come back for one month? Is some new species of mold going to grow?”

This self-deprecatory way of speaking is central to Parker’s personality: he’s a down-to-earth guy who’s a bit bashful about all the success. He attributes it to Australian culture, and what’s called “tall poppies”—a syndrome used to describe societies in which people of high status are resented and cut down.

“Australia is plagued with it. We’ve inherited it because of the fact that we’re kind of English, I guess,” he said. “There’s not this communal positivity and cheering everyone on. It’s kind of like, if you start getting success, people will bring you back down to your level. America doesn’t really have that, and it’s kind of amazing to see. If anything, I relish it because it’s a sign that you are successful. It’s one of the gauges of success, is people trying to fucking cut you down, you know? So I guess for a long time, I didn’t experience it at all, because I was this up-and-coming indie musician. I’d never really experienced it as much as I’d witnessed it. I kind of felt like I was missing out.”

In the band’s infancy, Tame Impala performed at small bars in Perth, where hecklers would yell at them. But Parker’s ascent in the musical world built steadily after Tame Impala released its first album, Innerspeaker, in 2010. Things hit a high five years later, with Currents. Rihanna covered the Tame Impala song “New Person, Same Old Mistakes” for her album Anti, with few changes to the production and lyrical content (the name, however, she changed slightly to “Same Ol’ Mistakes.”) Parker worked with Mark Ronson on the latter’s album Uptown Special, and on the Lady Gaga song “Perfect Illusion.” In 2019, he cowrote Camila Cabello’s song “Find U Again.”

“I see my work as a producer and a songwriter as two different things. Tame Impala is my bare expression and musical doing-whatever-I-want, not having that pressure to perform commercially,” he explained. “Whereas my love of pop music and being an extrovert producer, musically social person, is me working with other artists, on stuff that’s not Tame Impala.”

After the acclaim of Currents, Parker didn’t release another album for five more years. He doesn’t like to admit it publicly, he said, for fear of sounding too precious about it all, but he cannot hurry the musical process. The content for The Slow Rush had to come to him in his own time. While he was working on this latest album, he fell victim to the Southern California wildfires—the Malibu Airbnb he was staying and recording in burned to the ground. (He managed to save his laptop, hard drive, and Hofner bass guitar from the blaze.) Meanwhile, he and his wife, Sophie Lawrence, were in the midst of purchasing a house in the Hollywood Hills, where he’d eventually finish the album. The only thing was, there was no time to furnish the place. So when reporters writing features on Tame Impala timed to The Slow Rush release came to his house, all they saw was a single mattress on the floor.

“It is funny, because as soon as a Rolling Stone journalist enters the house, it’s just me, in a giant fucking empty mansion with an empty sushi packet on the ground, and that’s it. I’m just squatting in my own home,” Parker said. “That’s obviously something that they’ll hurry to report on. Which is fine. I didn’t even think about that when they came. I was kind of a bit embarrassed that I didn’t have this lavish setup. I was like, ‘Oh, no, they’re gonna think I’m just some kind of drop-kick.’ Little did I know, it was super rock ‘n’ roll, apparently.”

The empty house went along beautifully with the story the music media zeroed in on when writing about Parker: that he was a former loner who made synth-pop, disco-tinged music for kids who listened alone in their rooms—and he was now, finally, having his moment in the center of pop music.

“I think maybe people tried to create that narrative about me, because that seems like a fun story,” Parker said. “I’ve learned that you can’t make your story too complicated for people. When you’re telling someone about your favorite new artist, you’ll find some way to describe them in one or two sentences. Because that’s what people do, that’s how people communicate. I used to hate that; I used to loathe and detest the fact that my music had to be summed up in a one- or two-word genre. I’d be like, ‘Ugh, that’s so degrading and reductive!’ But now I’m like, ‘Eh. Fine. Whatever you’ve got to do. Yeah, I get it.’ “

“I just wanna keep this dream alive for now,” Parker sings on “It Might Be Time,” a song about facing the fact of aging, and leaving a younger, more energetic and reckless self behind—themes that appear consistently throughout the album. “Nothing lasts forever.”

It’s a sentiment Parker echoes in our conversation multiple times. He’s getting comfortable, nestling into married life—which, he notes, isn’t all that different from dating Lawrence, who he’s been with for about five years. “Why should it change? It would be weird if it did,” he said. He’s getting his house, once empty in the flurry of work finishing the album, renovated and furnished by an interior designer. Although Parker admitted he’s getting into this more settled space, there’s a balance. After he finished the album and it came out, he went to the American South for a friend’s bachelor party. “I got fucked up,” he said with a laugh. When he returned, though, he relaxed solo, the pressure finally off. He could relish it in his own time and in his way.

“If I don’t now, I’m never going to enjoy this process,” Parker said. “I’m more tuned in with seeing other artists release their albums, and seeing how much of a great time they have with it. And I want that for myself too. I’ve just told myself this time ’round that I’m going to enjoy every part of it: appreciate what’s happening. Because one day I won’t be able to, you know? One day I won’t be making albums anymore. And then I’ll be kicking myself that I never actually enjoyed it.”

Couple with Covid-19 infection have son at £5,000-a-term Surrey school