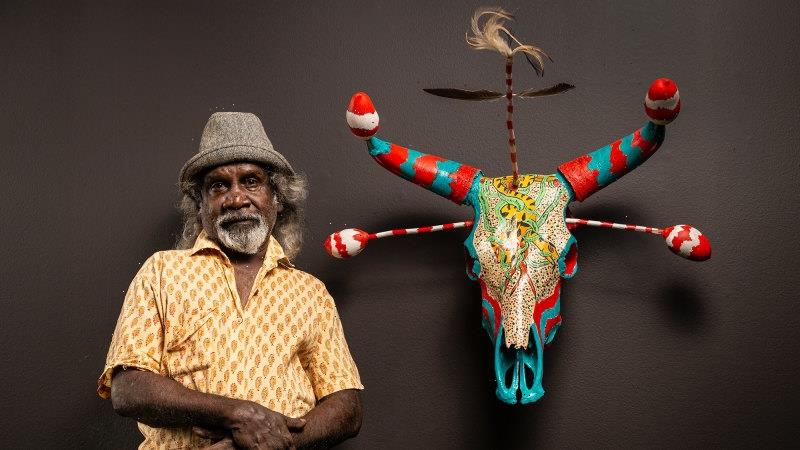 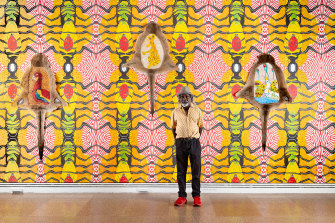 If there’s an image that stays in the mind after seeing Tarnanthi at the Art Gallery of South Australia, it’s a pale, ghostly Wandjina by Angelina Karadada Boona. This mysterious spirit figure, whose origins disappear in the mists of prehistory, has been reinvented as an elusive portrait. It’s here and not-quite-here; captured in the act of disappearing or coming into being.

I thought of those so-called spirit photos, in which a camera captures a whiff of ectoplasm lurking in the recesses of an old house, but Boona’s Wandjinas also serve as a potent symbol of Indigenous culture. From the time of the First Fleet it was believed Aboriginal people would simply disappear, as their “primitive” lifestyles were subsumed by western civilisation. When communities refused to accept the fate decreed by Social Darwinism, melancholy reflection gave way to active coercion. Along came the missions, the stations, the herding of diverse groups into ad-hoc settlements; and the child removal policies that created the Stolen Generation. 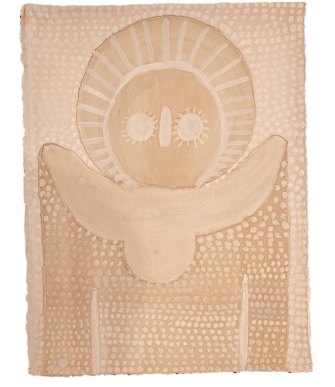 Through it all, Indigenous people have proven to be amazingly resilient. They have taken what they needed from the march of progress while sticking resolutely to their age-old beliefs and traditions. For many people in the remote communities, the Wandjinas, the Rainbow Serpent, and other ancestor figures, have the same reality as Jesus does to practising Christians. Some figures, such as the artist, Jarinyaru David Downs, had no difficulty reconciling Christian beliefs with local Creation stories. 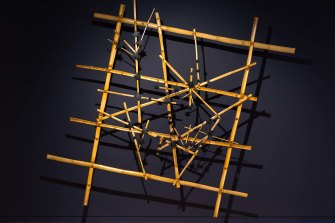 Like Aboriginal life in general, Aboriginal art has been viewed in elegaic terms. Many believe it will inevitably decline as the elderly artists who have experienced traditional lifestyles, are replaced by a younger generation with less connection to the land. The only problem with this prophecy of doom is that it’s not coming true. Ever since the Aboriginal art movement was born at Papunya Tula in the early 1970s, each generation has produced a new group of outstanding artists. The new artists have been more innovative, more outward-looking than their predecessors, but no less devoted to country – the bedrock on which all Indigenous culture subsists. 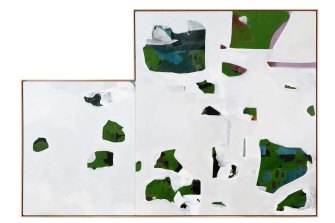 Karen Mills Untitled: Cycadsong from the series Some day we will walk together [on Country].Credit:Fiona Morrison

Tarnanthi, launched in 2015, has become Australia’s most important biennial survey of Indigenous art. Along with the National Aboriginal & Torres Strait Islander Art Awards, held every year in Darwin, Tarnanthi is essential viewing for anyone with an interest in the field.

Curator Nici Cumpston, who has been involved with Tarnanthi since its inception, has travelled all over Australia to research these exhibitions. She’s visited artists on their home territory, listened to their stories, and tried to stitch together a vivid, composite portrait of the state of the art. In a field in which there is no shortage of extroverts and opportunists, Cumpston is a modest, sympathetic personality who deserves to be better recognised. 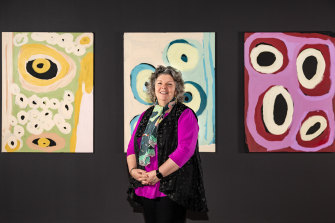 The strength of Tarnanthi is that it has always been uniquely receptive to the art and artists, not subject to the dictates of fashion or ideology. This year has presented more challenges than usual, as travel restrictions meant that most of the show had to be assembled via remote control.

In the past, Tarnanthi has been presented as a festival, with hundreds of people descending on Adelaide from all over the country. This year the activities have been muted, and there’s less sheer spectacle than in previous outings. Nevertheless, it’s an exhibition full of surprises and dazzling variety. 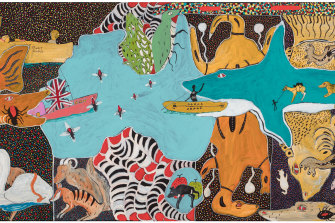 For those who’ve never seen his work before, there will be no one more surprising than John Prince Siddon. Looking at his surreal, encyclopaedic paintings that combine traditional motifs, local history, and personal stories with reflections on current affairs, one might think Siddon had studied at the Victorian College of the Arts, perhaps under Gareth Sansom or Jon Cattapan. Instead, he is completely self-taught – a former stockman who lost a leg in an accident, and has subsequently devoted himself to art. 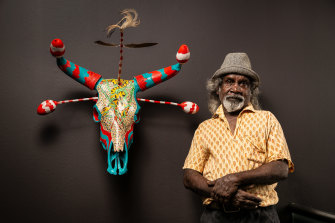 Siddon is all over this show. His work is on the cover of the catalogue and has been used to paper the long entrance wall of the downstairs gallery. He paints animals, boat people, fantastic landscapes, even the unmistakable mug of Scott Morrison. The works are eccentric by any standards, let alone those of Fitzroy Crossing in the Kimberley, where Siddon resides.

Another impressive feat is an enormous painting by Pitjantjatjara artist, Timo Hogan. Spread across three panels of 2×3 metres each, Lake Baker (2021) is Hogan’s masterpiece to date: four creamy-white shapes set against a black background, surrounded by a thin row of dots and the long, liquid form of a watersnake that moulds its body to the curve of the lake. Echoes of the American Abstract Expressionists are purely coincidental, but hard to ignore. 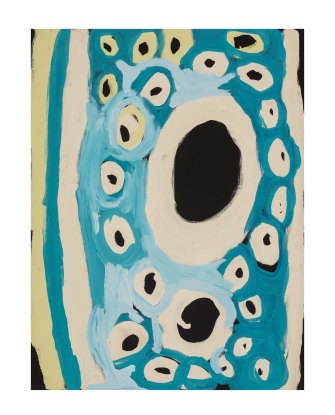 In Katjarra Butler’s paintings repetition adds force, until it’s clear that the 16 panels in this display represent a life story and a cosmology. To the untutored observer, each picture is an abstract configuration of sweeping brushstrokes and loose, circular shapes. To the artist they are schematic landscapes and repositories of memory. The colours and forms are meaningful in a way we only begin to discover when we see a video of Butler talking about the old days, telling stories, such as the one about the day her husband speared a big kangaroo.

There’s a palpable sense that we’re not simply looking at a random design but at a kind of dream diary that holds and reconfigures the past.

One can’t be expected to guess the details behind this exceptional series, yet there’s a palpable sense that we’re not simply looking at a random design but at a kind of dream diary that holds and reconfigures the past.

There are a lot of things in this show worthy of the closest attention. Kaylene Whiskey has become a crowd pleaser with her folky pictures of superheroines, pop stars and celebrities, but these are appreciated with a glance and smile. I was more taken with a large, collaborative painting made by 12 artists at Tjungu Palya, in which each individual hand is easily discernible, but the final composition knotted as tightly as a woven basket.

There are bold, confident canvases by Yaritji Young and Doris Bush Nungarrayi; enigmatic pictures by Karen Mills; a room hung floor to ceiling with works on paper by Tiwi artists; and an irresistible set of painted cars made from old sumps retrieved from wrecks by eight artists of the Minyma Kutjara Arts Project. 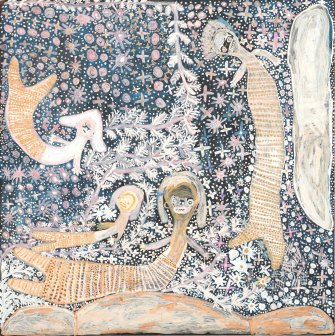 One final twist on an age-old motif is provided by Yolngu artist, Djerrkngu Yunupingu, whose pictures of mermaids in soft, pale colours, surrounded by twinkling stars, dots and flowers, bring a new expressiveness to the subject. Having grown accustomed to the sharp, linear forms of the mermaids – the Yawkyawks – on numerous bark paintings, I was struck by the way Yunupingu seemed to romanticise these figures. Judging by the crowd of schoolgirls camped in front of this display it wasn’t just me that felt their peculiar magnetism.

It’s appropriate to be discussing a show such as Tarnanthi shortly after we lost David Gulpilil, an actor who did more than almost anybody to bring Aboriginal culture before the eyes of the world. The journey that began with Nic Roeg’s Walkabout in 1971, would spark a new wave of Australian cinema at the same time the desert art movement got underway in Papunya. Forty years on, we’ve come a long way from the exotic vision of Gulpilil standing alone in the desert. Today we’re looking at a crowd engaged in a perpetual celebration.

The Booklist is a weekly newsletter for book lovers from books editor Jason Steger. Get it delivered every Friday.