Jeremy Calvert was not happy when he learned Leah Messer would be sharing some very personal information about their marriage in her new book.

Despite quarantine, Leah Messer‘s book release pushed her and ex-husband Jeremy Calvert to confront their past. During the Nov. 24 episode of Teen Mom 2, Leah revealed that she shared a bunch of secrets in her tell-all — including the fact that she didn’t really suffer from a miscarriage eight years ago… she actually had an abortion.

“I was not married to Jeremy — we were dating. But still, [my ex] Corey [Simms] was still really really in my head around that time. Both of us had mixed feelings about our relationship and I felt like I f***ed up by getting pregnant [with Jeremy]. And I had a rep at that time that was like, ‘Leah, this is going to look so bad on you. There’s this pill that you can go take, and it’s just like a miscarriage.’ And I was like, ‘OK’. Because you had to do it before you were eight weeks pregnant.” 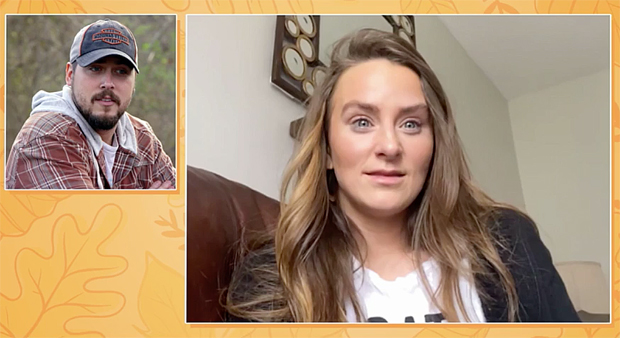 When asked why she lied about the abortion, Leah told her producer, “Because I was ashamed. I was ashamed of the choice that I made, and that I allowed others to influence my decision-making at that time.” Leah went on to explain that she didn’t want anyone to know she had an abortion — even Jeremy, who she didn’t tell until years later, when they were getting divorced.

“I don’t think anyone understands the guilt. I thought I was going to hell,” Leah said as she began breaking down in tears. “I thought I was [going to be] burning to death for the rest of my life, that I would never be forgiven, [and] I was also worried that [Jeremy] would be like, ‘You’re a murderer!’ What I’ve learned is that I get to love myself no matter what. I get to love myself, even beyond the mistakes that I’ve made in my life. And I get to forgive myself because we’re all perfectly imperfect.”

When Jeremy and Leah met up later in the episode, she asked him if he’d be willing to discuss her abortion on camera, and at first, he was hesitant. But his feelings got the best of him, and he went off. “I’ve been dreading that since you told me [you’d put in the book] a year ago,” Jeremy said.

He went on to tell Leah that she should have left that part of their past out of the book, but she disagreed. Jeremy tried recalling the moment she told him about her abortion, but because she admitted she was “blacked out” most of the time amid their divorce, their memories of that moment differed.

“It was f***ed up. I was not happy with you that night,” Jeremy told Leah. “[Our marriage] was horrible. It was f***ing horrible. F***ing dreadful.” But despite what they went through, Jeremy and Leah admitted that they’ll always love each other, as the episode literally ended with each of them saying, “I love you.”