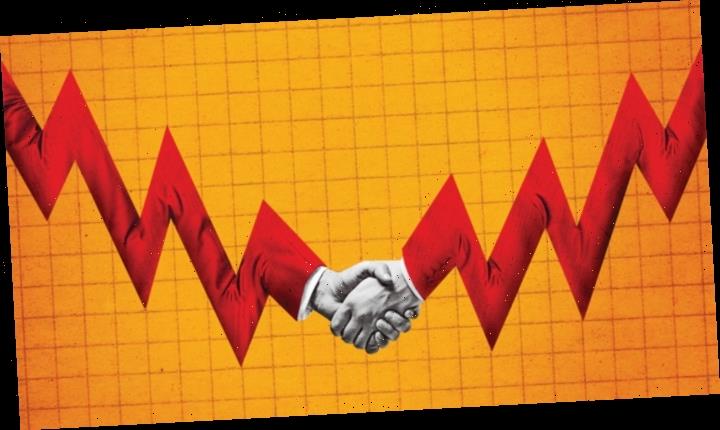 TV station group Tegna was drawn squarely into the spotlight on Friday amid reports that the broadcaster has received multiple acquisition offers.

Tegna shares soared 26.5% in trading Friday after Reuters reported that the company has received an $8.5 billion acquisition bid from Atlanta-based Gray Television valuing Tegna at $20 a share. Gray’s offer spurred private equity firm Apollo Global Management to make a similar bid albeit as an all-cash offer, according to Reuters. Tegna shares closed at $17.

A spokesman for Tegna said the company’s policy is “not to comment on market rumors.” Representatives for Gray Television and Apollo did not immediately return requests for comment.

Tegna has been the subject of acquisition rumors for months. The station group is seen as one of the last sizable broadcast entities up for grabs. Tegna is home to 62 stations in 51 major markets. Almost all of its stations are affiliated with the Big Four networks or CW.

Tegna management has been under pressure from activist shareholder Soo Kim, founding partner of hedge fund Standard General, to make some kind of move to boost the stock price. Kim has proposed an alternative slate of five directors to stand for election at Tegna’s upcoming annual shareholders meeting. Kim previously owned station group Media General, which was acquired by Nexstar in January 2017 for $4.6 billion. Standard General owns about 10% of Tegna’s shares.

“We understand from media reports that Tegna has received multiple offers from credible buyers,” Kim said on Friday. “We believe that the Tegna Board, with the assistance of independent advisors, needs to run a full and fair process to explore all alternatives to maximize value for all shareholders. We also understand that these proposals involve both cash and stock and all cash offers, and it is essential that the Tegna Board carefully evaluate the benefits and risks of all available alternatives. We stand ready to work with Tegna to help thoughtfully evaluate these proposals.”

Tegna management has pushed back against Kim’s efforts, raising questions about his track record as an investor with Media General as well as retailers American Apparel and Radio Shack. Kim has been critical of the Tegna board’s leadership of the company at a time of rapid transformation in the television business.

Tegna’s gain in regular trading Friday is a sign of investor interest in the deal potential as it came against the headwinds of another roller-coaster day for the Dow Jones Industrial Average and other indices. Gray shares fell 4.4% to $15.06.

Gray operates largely in small and medium-sized TV markets but the company has signaled its growth ambitions for the past few years. In 2018, it took a big step in raising its profile with the acquisition of Raycom Media.