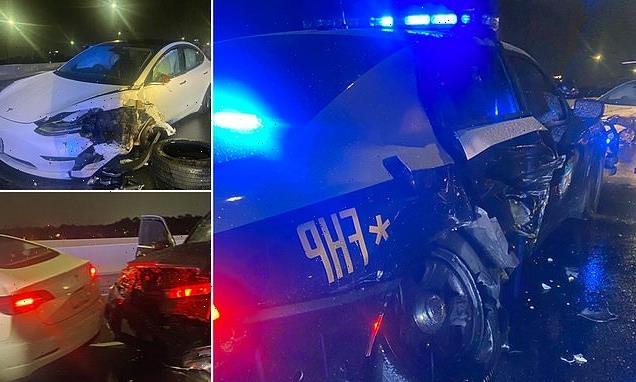 A Tesla Model 3 driving on ‘autopilot’ smacked into a Florida Highway Patrol cruiser on Saturday morning, narrowly missing the driver of the cruiser who had stopped in order to help a disabled vehicle.

The incident is the 12th such smash involving a Tesla on autopilot mode and an emergency vehicle. All the cars which have been struck had their lights flashing, or had deployed an emergency flare, illuminated warning sign or cones, raising questions about whether they may have confused the Tesla’s sensors.

Saturday’s smash happened after when the 28-year-old trooper, who has not been named, stopped shortly after 5 am on August 28 on I-4 near downtown Orlando while responding to a broken down car.

He put his emergency lights and was walking over to a disabled vehicle when the Tesla hit the cruiser’s left side, highway patrol spokeswoman Lt. Kim Montes told The Orlando Sentinel.

The Tesla also hit the broken down car, a 2012 Mercedes Benz GLK 350, according to CNBC. All three cars were badly-damaged by the force of impact, although it is unclear how fast the Tesla was traveling when it crashed. 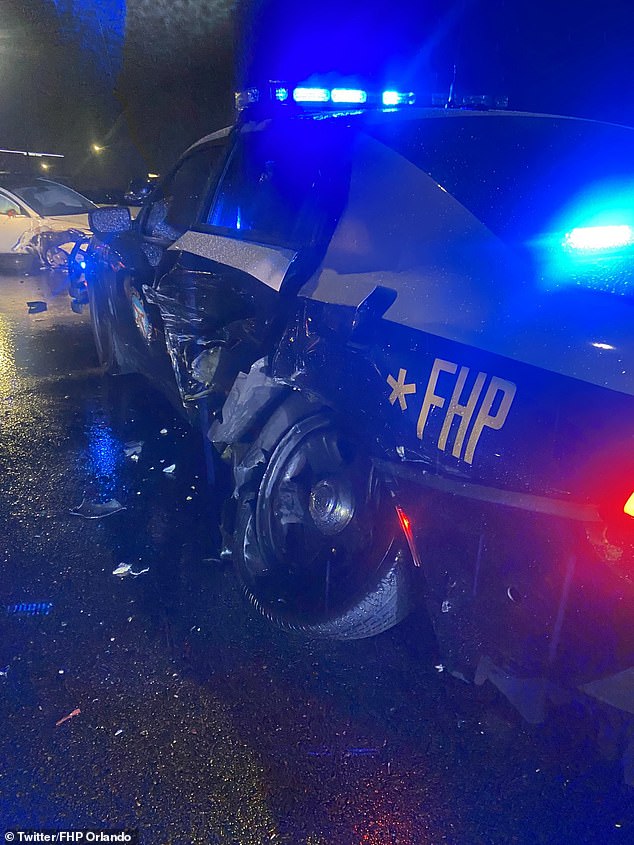 A Tesla Model 3 on ‘autopilot’ hit a Florida Highway Patrol cruiser on August 28 on 1-4 near downtown Orlando. The trooper had stopped shortly after 5 am to help a disabled vehicle

The 27-year-old Tesla driver and the driver of the Mercedes suffered from minor injuries, though the trooper was unhurt.

Montes told the Sentinel the crash is still under investigation.

DailyMail.com has also reached out to the Florida Department of Highway Safety for more information on this story, and is it unclear if the Tesla driver could face criminal charges. 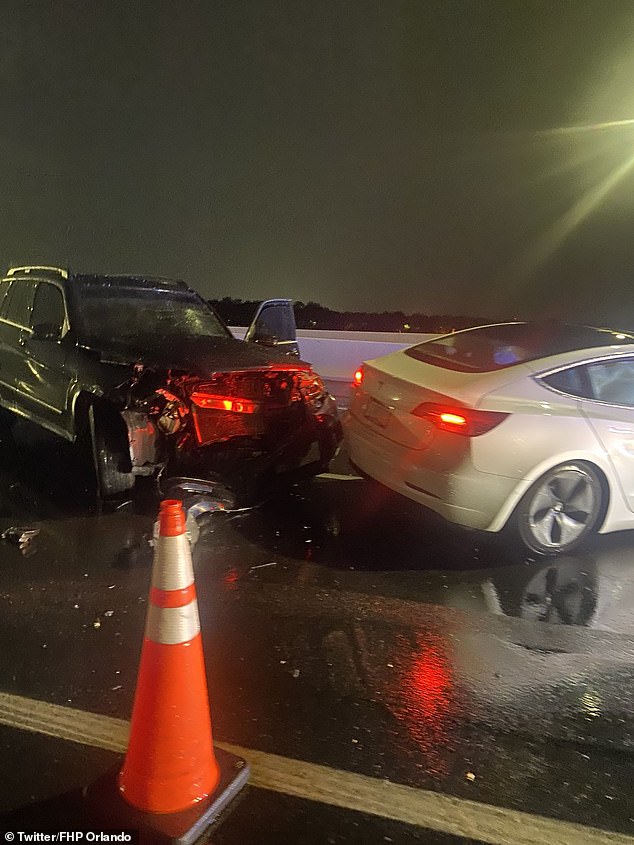 The trooper had stopped shortly after 5 am to help a disabled vehicle, a 2012 Mercedes Benz GLK 350 (left) 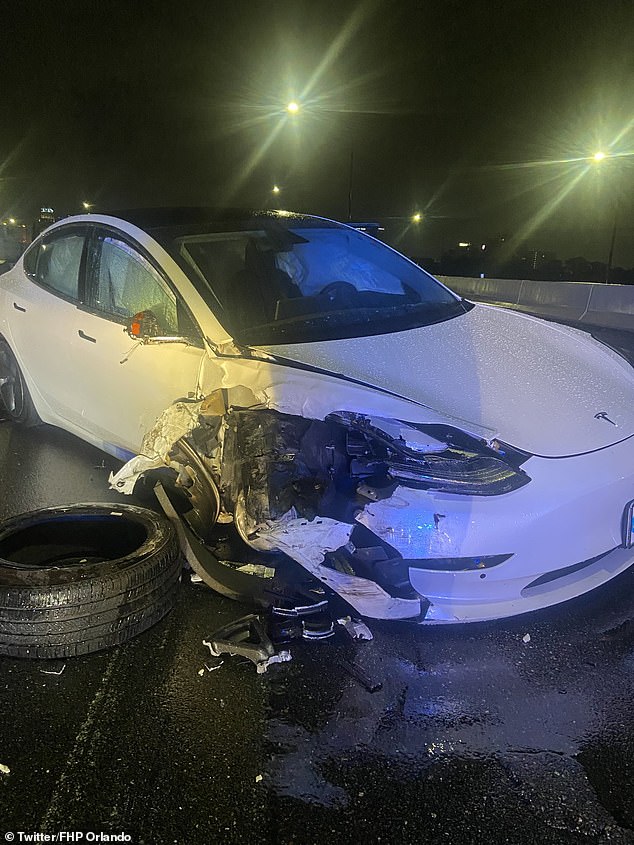 The 27-year-old Tesla driver and the driver of the disabled vehicle had minor injuries, but the trooper was unhurt, a highway patrol spokeswoman said

The autopilot system has eight surround cameras that ‘provide 360 degrees of visibility around the car at up to 250 meters of range,’ according to Tesla’s website.

‘Twelve updated ultrasonic sensors complement this vision, allowing for detection of both hard and soft objects at nearly twice the distance of the prior system,’ the website added.

Teslas equipped with autopilot have the technical capability to steer themselves on highways, although the firm has warned drivers to keep their hands on the steering wheel as normal at all times.

This incident is just the latest in a string of accidents where Tesla’s autopilot feature has played a role, prompting a formal investigation from the U.S. government.

Earlier this month, the U.S. government opened a formal investigation into Tesla’s Autopilot driving system after it was involved in 11 prior accidents – one deadly – that may be the result of the system’s issues spotting parked emergency vehicles.

The National Highway Traffic Safety Administration (NHTSA) said the investigation covers 765,000 vehicles, nearly everything Tesla has sold domestically since 2014. Of the 11 crashes that have been identified over the past three years, 17 people were injured and one was killed.

That deadly accident happened in Interstate 70 in Cloverdale, Indiana, in December 2019 and saw passenger Jenna Monet, 23, killed after the Tesla being driven by her husband Derrick slammed into the back of a parked firetruck.

The 11 prior crashes have occurred when Teslas on Autopilot or Traffic Aware Cruise Control hit vehicles at scenes where first responders have used flashing lights, flares, an illuminated arrow board or cones warning of hazards.

The NHTSA said the investigation covers the entire product lineup of the Musk-led company, the Models Y, X, S and 3 from the 2014 through 2021 model years.

The assisted driving system has frequently been misused by Tesla drivers, some of whom have been caught driving drunk or riding in the rear passenger seat while driving down a California highway.

Tesla and other manufacturers warn that drivers using the systems must be ready to intervene at all times. Teslas using the system have crashed into semis crossing in front of them, stopped emergency vehicles and a roadway barrier.

The crashes into emergency vehicles cited by NHTSA began on Jan. 22, 2018 in Culver City, California, near Los Angeles.

That saw Tesla using Autopilot struck a parked firetruck that was parked partially in the travel lanes with its lights flashing. Crews were handling another crash at the time.

‘The investigation will assess the technologies and methods used to monitor, assist and enforce the driver’s engagement with the dynamic driving task during Autopilot operation,’ NHTSA said in its investigation documents.

An investigation could lead to a recall or other enforcement action by NHTSA.

January 22, 2018 in Culver City: A Tesla Model S hit the back of a fire truck parked at an accident in Culver City around 8:30 am on Interstate 405 using the cars Autopilot system. The Tesla, which was going 65mph, suffered ‘significant damage’ and the firetruck was taken out of service for body work.

May 30, 2018 in Laguna Beach: Authorities said a Tesla sedan in Autopilot mode crashed into a parked police cruiser in Laguna Beach. Laguna Beach Police Sgt. Jim Cota says the officer was not in the cruiser during the crash. He said the Tesla driver suffered minor injuries.

The police SUV ended up with its two passenger-side wheels on a sidewalk.

The Tesla driver, Derrick Monet, and his wife, Jenna Monet, both suffered serious injuries and were transported to the hospital for immediate medical care. Jenna ultimately succumbed to her injuries and was pronounced dead at Terre Haute Regional Hospital.

July 15, 2020 in Conchise County, AZ: A Tesla Model S hit an Arizona Department of Public Safety patrol car, resulting in the patrol car rear-ending an ambulance that was on the scene of an earlier car accident. No one was seriously injured, but the Tesla driver was taken to the hospital for injuries.

August 26, 2020 in Charlotte, NC: A Tesla driver watching a movie crashed into a Nash County Sherriff’s Office deputy vehicle in Charlotte, North Carolina on US 64 west.

The driver, Devainder Goli, of Raleigh, was accused of violating the move-over law and watching television while operating a vehicle.

The Tesla driver was not injured, but was taken into custody on a DWI charge.

March 17, 2021 in Lansing, MI: A Tesla on autopilot crashed into a Michigan State Police car. Troopers from the Lansing Post had been investigating a crash involving a car and a deer on I-96 near Waverly Rd in Eaton County at around 1:12am.

While investigating the crash, a Tesla driving on autopilot struck the patrol car, which had its emergency lights on.

Neither the driver of the Tesla – a 22-year-old man from Lansing – nor the troopers were injured at the scene. Police issued the unidentified man a citation for failure to move over and driving while license suspended.

May 15, 2021 in Arlington, WA: A Tesla driving in Arlington, Washington hit a police vehicle that resulted in ‘significant damage’ to the police car.

There were no injuries reported from the incident.

May 19, 2021: Three people were hospitalized after a Tesla hit a parked Miami-Dade County Department Transportation Road Ranger truck that was blocking the left lane of I-95 to help clear the debris of an earlier crash.

The driver of the Tesla was transported to a nearby hospital with with severe, albeit non-life-threatening, injuries.

August 28, 2021: A Tesla Model 3 driving on ‘autopilot’ smacked into a Florida Highway Patrol cruiser on August 28, on I-4 near downtown Orlando.

The 27-year-old Tesla driver and the driver of the disable vehicle suffered from minor injuries, though the trooper was unhurt. The crash is still under investigation.