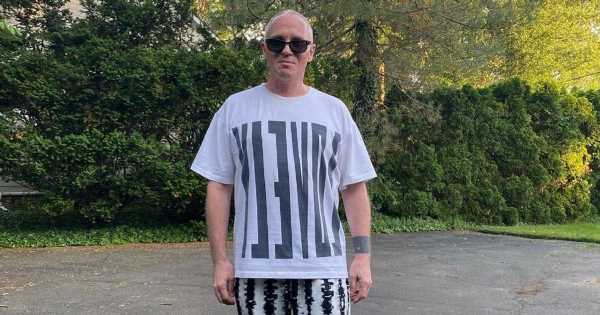 The Shamen were faced with widespread criticism when now-famous drug anthem Ebeneezer Goode was released 30 years ago – but despite the backlash, the frontman stands by drug use as a powerful tool.

Richard West, widely known as Mr C, backs the claim that “e’s are good” in the song's chorus – the E of course standing for ecstasy.

The 56-year-old spoke exclusively to the Daily Star ahead of the 30 anniversary of the number one hit's release, on August 24, 1992.

Mr C, who is originally from Holloway in north London but now lives in LA, confirmed that the song IS promoting drug use but also added that it has warnings too and it should “never be abused.”

He sings in the second verse: “‘It’s very much maligned and misunderstood, e’s the kind of geezer that must never be abused.”

When the song was released, the band initially denied claims it was about drugs, instead insisting it was just about a man called Ebeneezer Goode. Over the years, Mr C has admitted the song has another meaning.

While the DJ and rapper no longer does the drug as he now finds it “boring”, he praised its effectiveness as a treatment for people with trauma and PTSD.

“Yes it was,” Mr C said when asked if the song was promoting drug use. “It was a song about ecstasy which by the way is now being used for PTSD by doctors and stuff like that.

“Ecstasy I think can do a lot of people a lot of favours. It’s the only analogue of ecstasy that makes people really reach deeply into their subconscious and open up the door of the memory box of trauma and bring trauma out. It is being actually used for traumas now with great success so we were right. E’s are good.”

Experts atKing's College Londonhave been trialling the use of MDMA to treat Post Traumatic Stress Disorder (PTSD) in a controlled environment.

The UK trial is sponsored by MAPS and co-funded by the charity Supporting Wounded Veterans (SWV).

On the university's website, it states: “Trauma illnesses can be difficult to treat, as talking therapies require participants to revisit traumatic events in order to overcome them, risking re-exposure to the experiences that caused the initial harm. Current conventional treatments are only effective in 30% of cases.

“The use of MDMA, when used in a clinical environment and with the support of a trained therapist, allows the patient to revisit their trauma without becoming overwhelmed, thereby increasing the likelihood that the therapy is effective.”

Mr C has been a supporter and advocate of the legalisation of all drugs including cocaine and heroin and believes that information and services should be put in place to help people battle addictions.

He no longer does ecstasy, preferring mushroom chocolate and other psychedelics such as LSD, and said that everyone should "take a trip once".

He continued: “I think everybody should take a trip once in their life. I’ve always been an advocate of the legalisation of all drugs, the possession and consumption of all drugs, and I honestly believe what one adult human does with their own body so long as they’re not killing or committing suicide, it’s their business and I think that’s the way it should be.

“I’m an advocate for the total legalisation of possession and consumption of all drugs including the bad ones. If we legalise them and then provide the information and services to help people fight their addictions, we really need to help these people and until we supply and provide the services and the facilities to help these people we’re not going to get rid of the problem of addiction which is a massive massive problem.”

Although there is very little to no chance of The Shamen getting back together, Mr C is proud of what they did back in the 1990s as a whole. He even dubbed them a “very special band.”

The band split in 1999 following a fallout with their record company but Mr C has remained in the music industry and even has his own record label Superfreq which celebrated 20 years as a brand recently.

He is now preparing to welcome revellers to his own festival – Summer Love Festival – which will be taking place at Billing Aquadrome, near Northampton, on September 17, 2022.

The boutique festival is set to welcome House music legends while also providing a platform for new talent.

Speaking about the festival he said: “It’s an underground music festival based on house music and its roots and it's very exciting.

“The lineup has lots of original legends and new up-and-coming acts as well so I’m going to be performing myself. I'm doing a live PA.

“We’ve got the legendary Robert Owens from Chicago, Graeme Park, Terry Farley from Faith Magazine and junior Boyzone, two of the original godfathers of house music Evil Eddie Richards did remix lots of Shamen tracks including Ebeneezer Goode we’ve got Jazzie M who used to own record shop called Ozone. We’ve got Saytek Live who is one of the best techno live acts.

“These are all the old school names that are playing and then we’ve got lots of newcomers as well that we’re providing a platform for and it’s all completely underground and it's for specialists people that are into specialist dance music and quality lifestyles and a crowd that's been built up over 35 years of putting on quality and beautiful music.”

After the festival, he is looking forward to releasing new music that he has been working on.

Tickets for the Summer Love Festival can be purchased by clicking here.