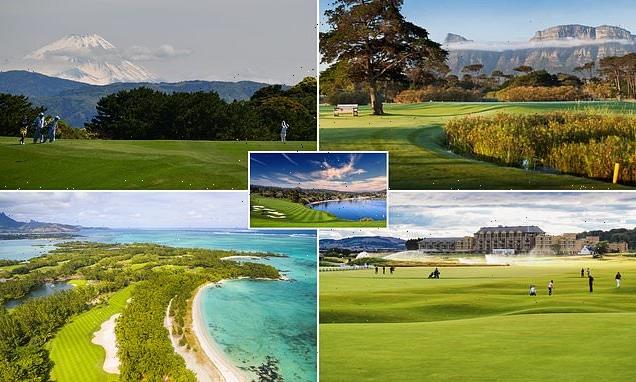 Fairways to heaven: As restrictions ease, it’s time to plan the fantastic holiday you’ve been dreaming of. So, with the help of golf’s greatest stars, we find the world’s best places for your once-in-a-lifetime round

Fancy a fabulous golfing holiday but can’t decide where to go? Then allow some of the world’s greatest golfers to help with the decision.

Here we present golf courses around the world, from California to Melbourne via Scotland, that have been given the stamp of approval by stars including Tiger Woods, Jack Nicklaus and Colin Montgomerie. 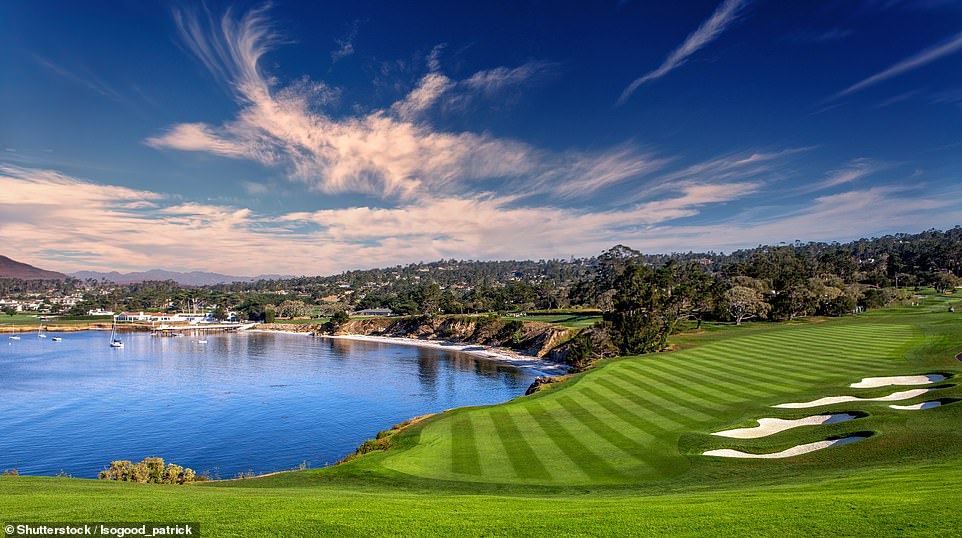 Jack Nicklaus once said: ‘If I only had one round of golf left to play, I would want to play it at Pebble Beach’, pictured

Jack Nicklaus once said: ‘If I only had one round of golf left to play, I would want to play it at Pebble Beach.’ Quite an endorsement for this dramatic, Pacific Ocean-side course in California, coming from the player many believe to be the greatest ever thanks to 18 major championships wins – three more than Tiger Woods, who is in second place.

Indeed Nicklaus, nicknamed the Golden Bear for his broad physique and mop of blond hair, is such a fan that he helped redesign its tricky fifth hole.

The appeal of Pebble Beach Golf Links is its stunning location on the rugged coastline of the Monterey Peninsula. And it makes a perfect stop on a California road trip from San Francisco south along Route 1.

The course has hosted seven majors (the eighth will be the US Open in 2027) and it has a dash of celebrity about it. Clint Eastwood, who lives in nearby Carmel, is among the investors and an annual ‘pro-am’ tournament is held in which the comedian Bill Murray and actor Kevin Costner have played. But while it may be one of America’s best-loved courses, beware: rounds are eye-wateringly expensive.

The club, tucked away in a suburb close to the ocean, has two courses that are much-loved by Greg Norman, one of Australia’s all-time greatest players.

Norman, known as the Great White Shark for his aggressive shot selection and world number one for almost seven years, has described it as ‘probably the most natural, beautiful, challenging golf course in the world.’

It is the quality of Mackenzie’s design of the West Course, where holes slink between heathery slopes and the greens are as smooth as billiard tables, that sets it apart. The Scot was also responsible for Augusta National in Georgia, the gorgeous home of the Masters Tournament.

Parts of the West Course are so tricky that it ‘messes with a good player’s mind,’ says Norman.

England’s champion golfer Nick Faldo is another fan, saying: ‘The West Course might just be the best in the world.’

Drop in by helicopter 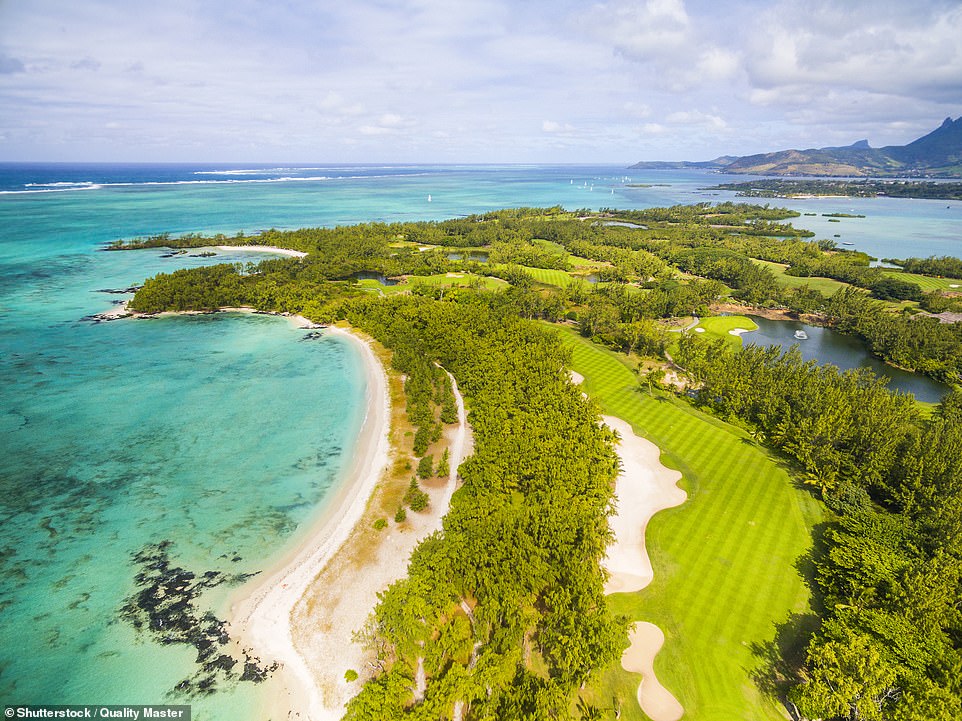 Set amid a rolling landscape thick with tropical vegetation beside the Indian Ocean, Ile aux Cerfs Golf Club is ranked number one in Mauritius by Top100golfcourses.com.

The course was designed by the German two-time Masters champion Bernhard Langer, who said he aimed to utilise the ‘amazing natural setting’ to ‘arouse all the senses’. The Scottish golfer Colin Montgomerie, who won a record eight European Tour Order of Merit titles, describes it as ‘must play’ for all golfers.

You reach the first tee by taking a helicopter or ‘special golf’ boat shuttle from a private jetty. Fairways curl between mangrove forest, gullies, lakes and volcanic rock outcrops. The fifth hole skirts a beautiful tidal pool, while the 16th, across a mangrove, is named ‘Reach Me If You Can’.

After a round, relax with a drink or meal at Langer’s Bar & Grill. Stay at the nearby Shangri-La’s Le Touessrok for a luxurious break by white-sand beaches and soothe tired muscles in its top-class spa.

From a mountain top to deep bunkers 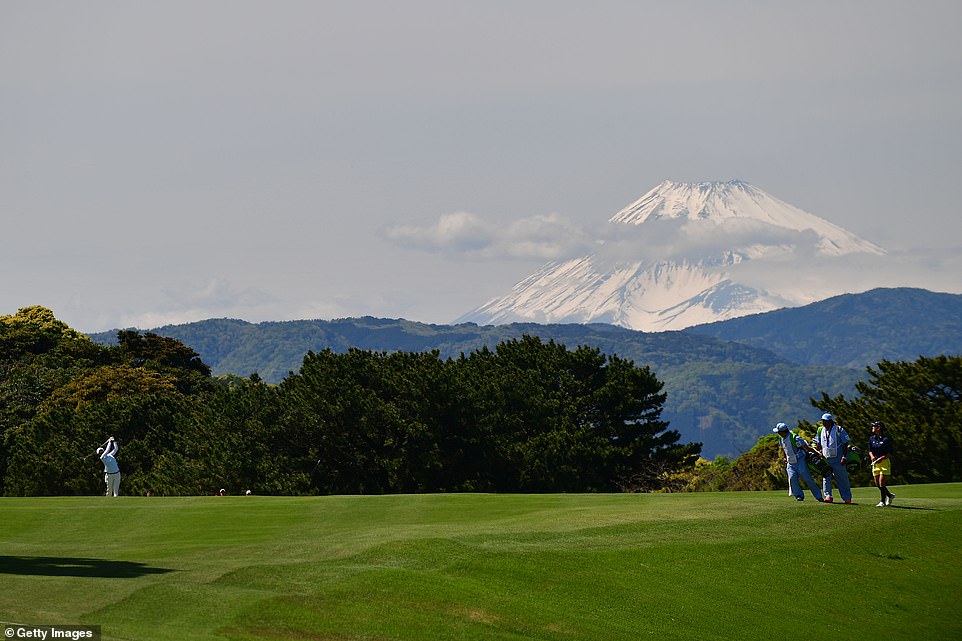 With Mount Fuji as a backdrop and the Pacific Ocean sweeping beyond plunging cliffs along the fairways, the pair of courses at Kawana Hotel in Japan’s Shizuoka Prefecture are breathtaking.

Of the two, the Fuji Course is the classic, designed in 1936 by yet another legendary golf course designer, Charles H. Alison, a Lancastrian who described the setting as a paradise. He added: ‘It lies among the hills beyond the hot springs of Ito on a pine-covered plateau bordered by red cliffs which descend down to the blue sea. From a wooded bay, miles distant, a fishing village sends out boats with brown sails to complete the last detail of a perfect scene.’

The old-fashioned fishing vessels may have vanished but the glorious scenery ought to inspire your best golf, although watch out for the difficult 15th as well as for deep bunkers throughout.

The plush five-star hotel has a hot springs spa, an outdoor pool, a snooker room and a mah jong room, of course.

Swing your way through to the bar

AND WHAT DOES TIGER THINK? 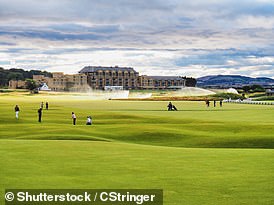 Tiger Woods who is still recovering from his horrific car crash in California in February, says the Old Course at St Andrews (above) – the home of golf – is his favourite anywhere: ‘I think the history behind St Andrews is amazing. There is no other golf course in the world that can say that every great player that has ever played the game has played that golf course. When you first play it, you think, “All right, this course really isn’t that hard.” Then the wind comes up and it just becomes brutal.’

Rounds from £98 (standrews.com); B&B doubles at the Old Course Hotel from £408 a night (oldcoursehotel.co.uk).

Royal Cape Golf Club is home to the oldest golfing society in South Africa, dating from 1885.

With views of Table Mountain from a southern suburb of Cape Town, the setting is awe-inspiring and the course is perfectly kept.

The South African Open has been played here ten times, with the South African Ernie Els, nicknamed The Big Easy due to his languid playing style, one of the most popular winners in 1999.

Although Table Mountain looms in the background, the course is mainly flat, winding through pretty parkland with rare flora native to the Cape.

Expect narrow fairways, plenty of bunkers, streams and ponds, as well as a lovely old clubhouse with a wood-panelled bar and a veranda – a great spot to unwind after a tough round.

The lively V&A Waterfront with its restaurants, bars, boutique shops and hotels is close by.

A masterpiece by a landscape artist

He’s not wrong – the rolling Andalusian landscape dotted with ancient cork and olive trees is magnificent, and the weather is golf-friendly year-round.

Real Valderrama is a few miles north of Gibraltar and was designed by the renowned American golf course architect Robert Trent Jones in 1974.

An indication of its quality is that when a venue was being sought for the first Ryder Cup to be held on continental Europe in 1997, Valderrama got the nod. Prior to then, the Ryder Cup in Europe had been hosted exclusively in the UK.

Valderrama is challenging, especially the 17th hole, which was redesigned by the late Spanish golfer Seve Ballesteros, the country’s best player and former world number one. But club players can enjoy rounds without feeling intimidated.

Rounds from £345 (valderrama.com); seven nights with one round at Valderrama and three at nearby courses plus B&B at the elegant Hotel Encinar de Sotogrande from £1,369pp (yourgolftravel.com).

Designed by a champ, it’s not for chumps

No prizes for guessing who designed the Faldo Course at Amendoeira Golf Resort.

Britain’s Nick Faldo was called upon to create this tough set of 18 holes in the Algarve, of which he has said: ‘You have incredible views, undulating land, and any time you get natural terrain like this, it is great fun to work with.’

You also have water hazards, rocky hillsides, scrubland-style bunkers and plenty of cacti, oaks and olive trees to negotiate – so bring your best game.

Amendoeira has a second course designed by the late Irish golfer Christy O’Connor Junior, next to the Faldo Course. There is also a floodlit nine-hole course for anyone who cannot get enough of playing in daylight hours.

The resort has kids’ clubs, pools, waterslides and football academies. There’s horse-riding, tennis and a fitness centre. Tennis and golf lessons are offered, with a Junior Golf School for youngsters.

It’s also just a 15-minute drive to the beach.

Rounds from £110 (amendoeiraresort.com); three nights at Amendoeira Golf Resort with one round on the Faldo Course and a round at a nearby course from £259pp based on four sharing, flights excluded (yourgolftravel.com).

FASHIONABLY FRENCH – AND FIT FOR A KING

About 20 miles south of Boulogne on the coast in north-east France, Golf du Touquet’s La Mer course has splendid sea views on a sandy, rolling landscape similar to the ‘links’ courses created between dunes on Scotland’s east coast.

During the 1920s and 1930s, the fashionable golf club and hotel enjoyed its heyday; the Prince of Wales, soon to be King Edward VIII, even played at La Mer a few days before its official opening in 1931.

The course was designed by Charles H. Alison (also behind the Kawana Hotel course in Japan) and Harry S. Colt (another early golf course genius) and you can expect clever, winding fairways between dunes with precision required for good scores. The course has hosted the French Open six times, with Seve Ballesteros among the winners.

The connected Le Manoir Hotel, with a pool, a gourmet restaurant, chic bar and billiards room, is generally considered the most stylish golf hotel in France.

Rounds from £33; doubles at Le Manoir Hotel from £190 a night (letouquetgolfresort.com).