Home » Lifestyle » These are the best Christmas markets in the UK 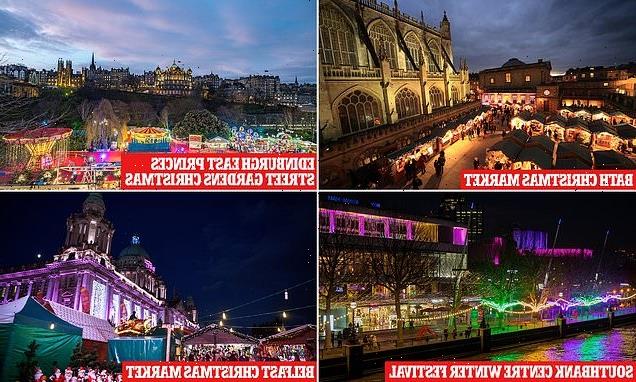 These are the best Christmas markets in the UK

Where is my nearest Christmas market? Femail reveals the top festive picks around the UK

With the festive season upon us there is no better way to get yourself in the seasonal mood than heading to a popular yuletide Christmas market.

From Edinburgh to Exeter, the UK is home to some of the most spectacular Christmas markets in Europe, selling festive gifts and delicious food.

FEMAIL has gathered some of the best Christmas markets across the UK, including Belfast, Bath and Padstow. 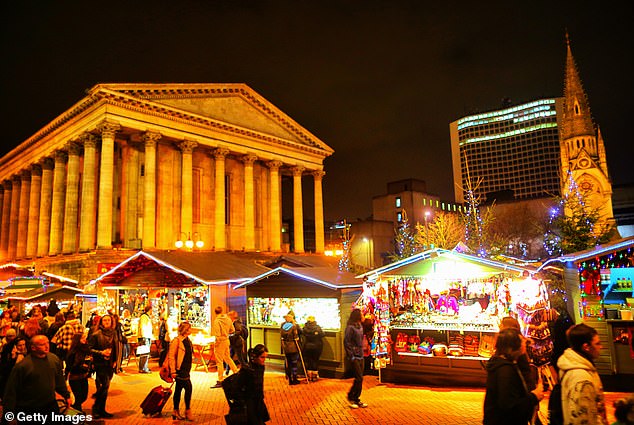 Birmingham’s Frankfurt Christmas Market is a firm favourite in the city’s festive calendar, drawing in huge crowds of both residents and visitors.

It is the largest authentic German Christmas market outside of Germany or Austria, boasting 80 stalls of traditional gifts, drinks and food, including pretzels, schnitzels, bratwurst and toasted almonds.

Another huge draw is its bandstand location in Victoria Square and the programme of live music and carol singers that bring the party atmosphere to festive shopping.

When: 3rd November to 23rd December 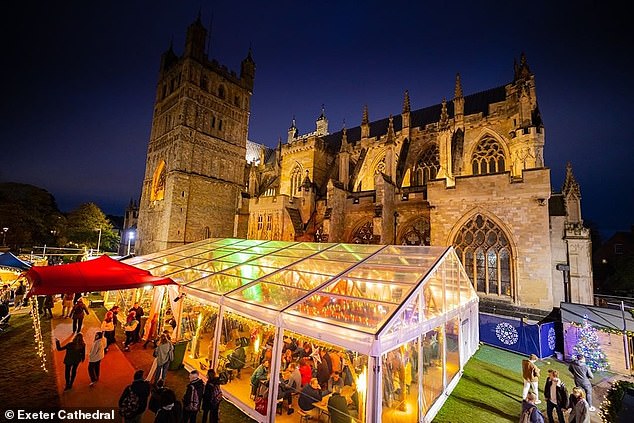 Exeter Cathedral Christmas Market is the largest in Devon and will be bigger than ever this year with more than 100 vendors taking up residency in the Cathedral Green.

The majority of stalls will be West Country-based businesses such as  Alison Miles Pottery, Flapjackery, and Claire Vaughan Designs.

Visitors in need of a break from the Christmas shopping can also enjoy the market’s bars and entertainment, with two local bar cocktail Bar Dr. Inks Curiosities making its market debut this year.

In addition, there is a global street food village and Exeter Cathedral Choir will be singing traditional carols.

Children will also love the Elf Express from Exmouth Miniature Railway, which runs on weekends, too.

When: 18th November to 18th December 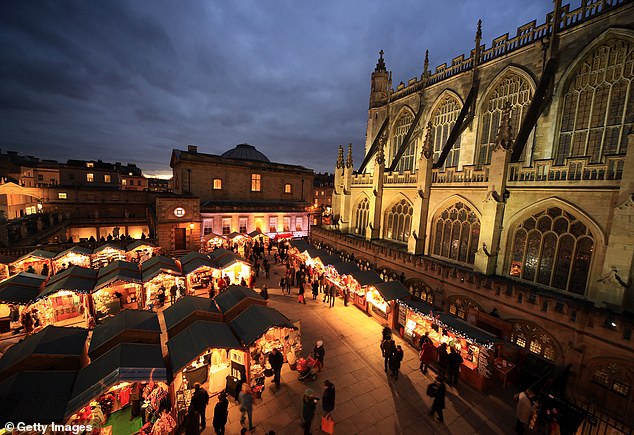 Bath Christmas Market will celebrate its 20th anniversary this year, and after two years of scaling back is ready to jump back into everything festive

After scaling back its usual yuletide affair, for the past two years, Bath Christmas Market is back in full swing this year, celebrating its 20th anniversary.

The jubilations will see more than 150 pop-up chalets set up on the picturesque Georgian streets and surrounding its prized Abbey.

You should expect traditional artisan makers from around the south west, plus further field, food stalls, and a festive ice rink, complete with an alpine bar and glow golf.

When: 24th November to 11th December 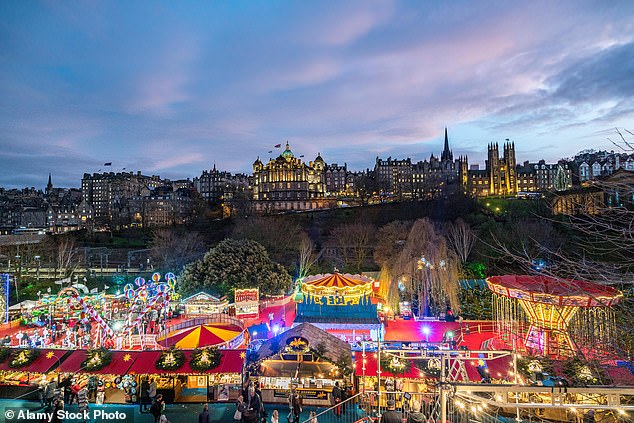 Edinburgh Christmas Markets spread out across the city but it is East Princes Street Gardens that will host an array of crafters, artisans and independent retailers from Scotland and across Europe

There is a huge amount going on in the Scottish capital this festive season, with the big wheel, Santa land, and a Christmas tree maze all making a return.

However, in East Princes Street Gardens there will be an array of crafters, artisans and independent retailers from Scotland and across Europe setting up stalls, laden with gift ideas.

In addition, this year will see a brand new Community Christmas spreading festive cheer across 12 locations in the city, with special projections and performances bringing together local talent.

When: 25th November to 3rd January 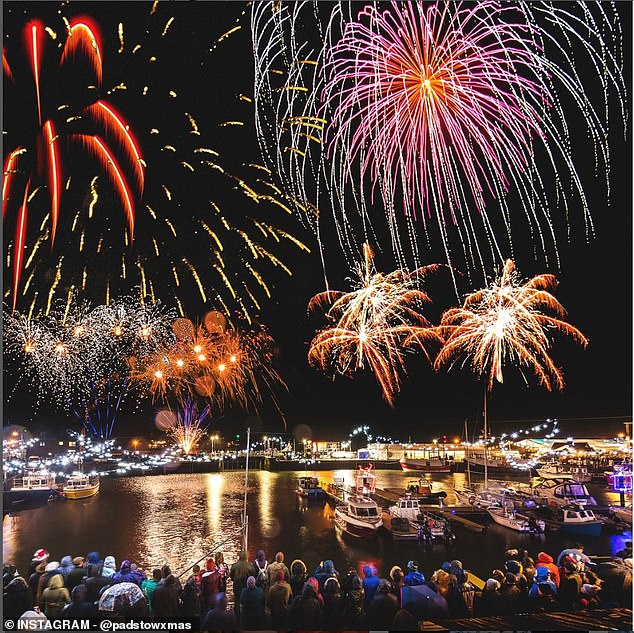 The fishing harbour of Padstow turns into a festive and culinary delight at the beginning of December. There is also a spectacular fireworks display during the festivities

The fishing harbour of Padstow turns into a festive and culinary delight at the beginning of December with chefs like Rick Stein, Nathan Outlaw and Paul Ainsworth offering free cooking demonstrations.

The extensive Christmas market has plenty of locally produced food and drink perfect for gifts, including brie and yarg from the Cornish Cheese Co, and jellies and jams from Cornish Meadow Preserve.

The county’s artists are out in force, too with silver bracelets by The Old Farmhouse Jewellery and animal paintings by Bodmin-based artist Nicola Jane Rowles.

To finish things off there will also be a spectacular fireworks display over the harbour.

When: 1st December to 4th December 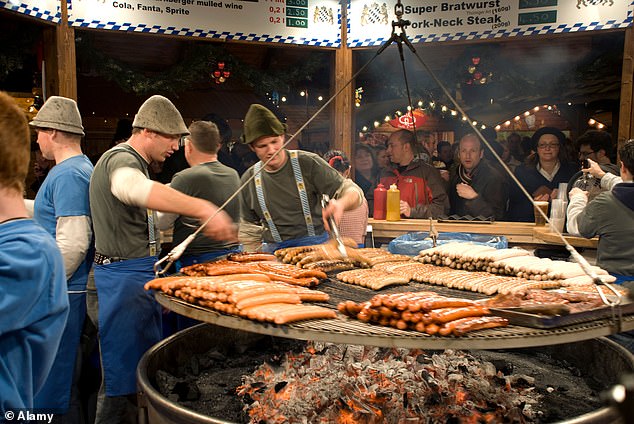 With over 220 stalls across nine sites throughout the city centre, this year’s Christmas Markets will definitely bring some festive cheer.

Manchester will also be home to a French market, a German market, a World Christmas market and a dedicated Arts & Crafts market, plus seeking the return of its ice rink.

When: 13th November to 18th December 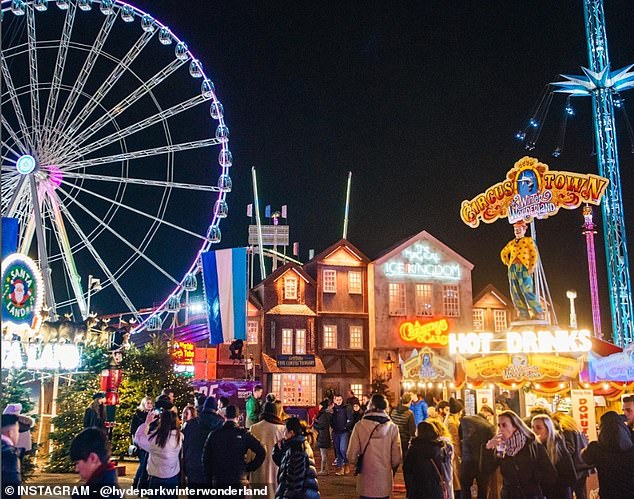 Located in the heart of London’s Hyde Park, Londoners and tourists can immerse themselves in six weeks of festive joy.

Not only is Winter Wonderland home to the world’s tallest transportable observation wheel, but it also boasts a Magical Ice Kingdom, and an array of thrilling fairground rides, alongside an open air ice rink and plenty of bars and food stalls.

When: 18th November to 2nd January 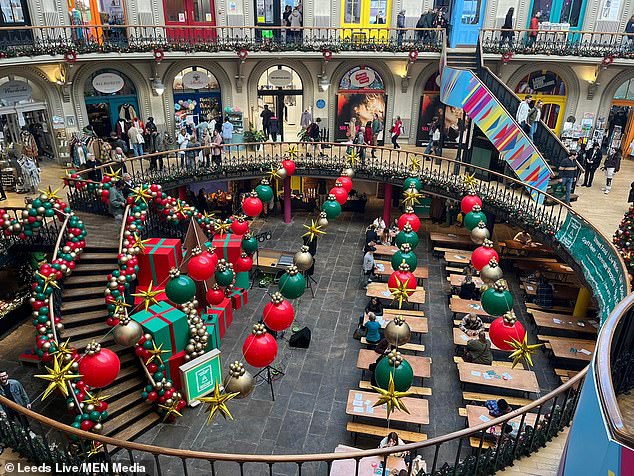 Many a Yorkshireman and woman was disappointed to hear that the popular Christkindelmarkt, known as the German Christmas Market, wouldn’t be returning for what would have been its 20th year.

However, the team behind the Leeds Rum Festival have come to the rescue, curating a brilliant line-up of rotating food and drink pop-ups, from spirit tastings with Filey Bat Whisky, to a festive bar serving up salted caramel espresso martinis and vendors such as Dijon Boys have created festive menus.

Held in the city’s iconic Corn Exchange, local shops will be opening their doors for Christmas shoppers with addition of Christmas stalls from Mahogany Market and Indie Makers.

There will also be live music from local groups such as Lucy’s Pop Choir.

When: 11th November to 23rd December 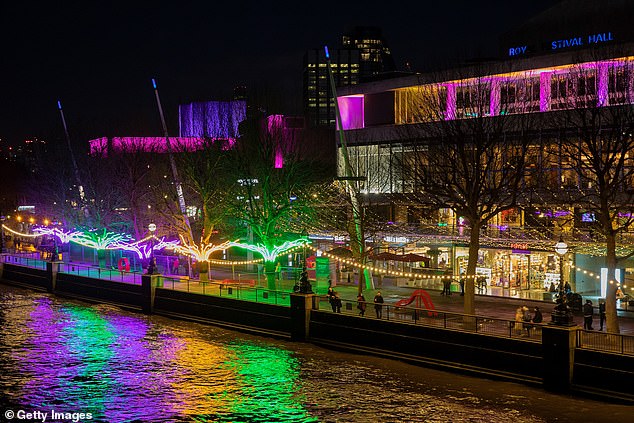 Stroll along the Thames for truly seasonal pleasure at the ever popular Southbank Centre Winter festival.

All along Southbank are strings of decorations and traditional illuminated wooden cabins selling Christmas gifts, as well as mince pies, spiced cider and piping hot mugs of mulled wine and hot chocolate.

Not only are there festive stalls but Southbank hosts an array of entertainment over the festive period from a glittering New Year’s Eve Party, to cabaret and very merry comedy.

In addition, Fire and Fromage from Jimmy’s will create a magical Alpine setting in your own private snow globe and the curling club will be hosting a winter pop up.

When: 3rd November to 8th January 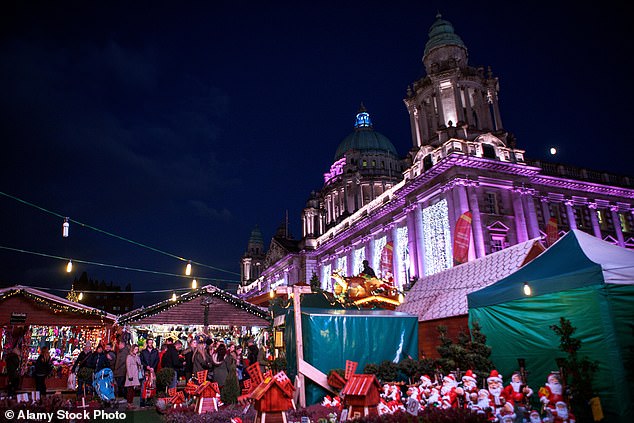 Set in the gardens of the 19th-century Belfast City Hall, the market attracts visitors from across Europe and the UK

Set in the gardens of the 19th-century Belfast City Hall, the market attracts visitors from across Europe and the UK.

There are over 100 chalets selling artisan made gifts, and handmade garlands and wreaths.

The popular food court makes a welcome return this year, serving up a huge variety of dishes from French crepes to Belgian chocolates and Dutch mini-pancakes.

Also making a return is the vintage Helter Skelter and the much-loved carousel.

When: 19th November to 22nd December 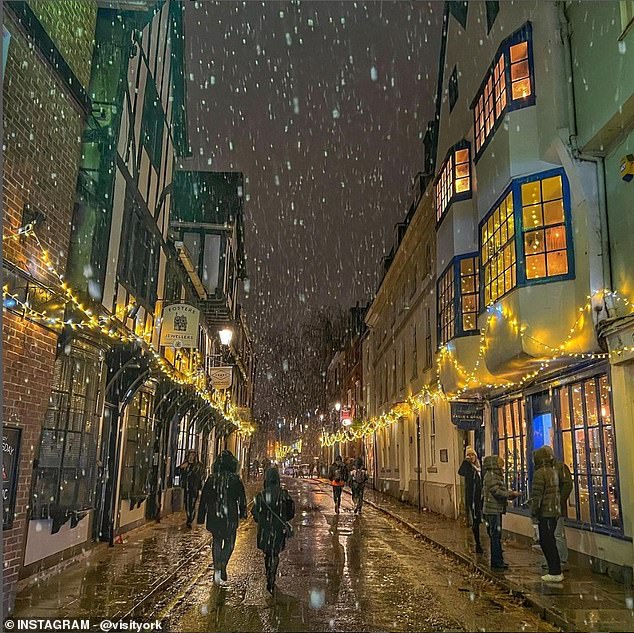 This year marks the 30th Anniversary of St Nicholas Fair, which has been a staple in York’s streets during the festive period since 1992

The medieval city of York turns into a festive winter wonderland during the colder months.

This year marks the 30th Anniversary of St Nicholas Fair, which has been a staple in York’s streets during the festive period since 1992.

The alpine-style chalets line Parliament Street and St Sampson’s Square and are home array of local traders and artisan products.

Brand new to York Christmas Market for 2022 is a traditional Swiss chalet, The Winter Hütte, which offers a ‘Swiss with a Twist’ dining experience from one of Yorkshire’s best-known chefs, the Michelin-starred Andrew Pern.

When: 17th November to 23rd December 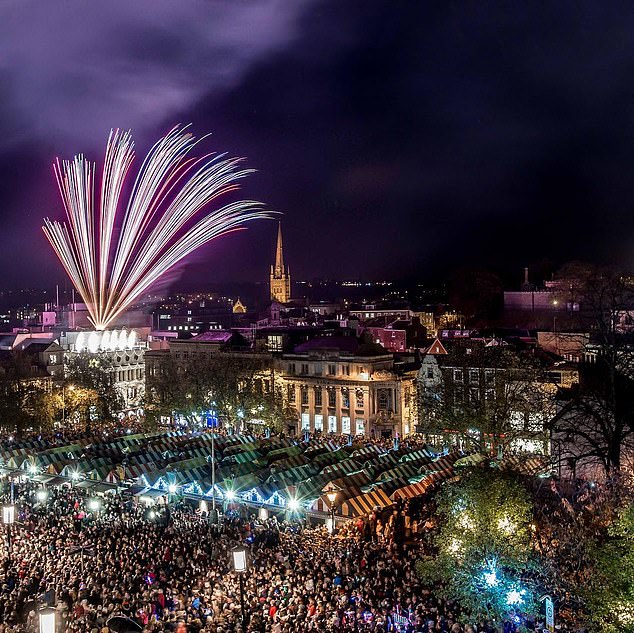 The Festive Fair at the Forum is Norwich’s biggest Christmas market, attracting thousands of visitors year-on-year

Norwich hosts several Christmas markets over the festive period, with events taking place from the end of November right up until the big day.

The Festive Fair at the Forum is the city’s biggest Christmas market, attracting thousands of visitors year-on-year.

You can expect Christmas carols and festive tunes to be played by Norfolk’s own Pavilion Brass Quintet each day and on Sundays there will be miniature donkeys from Mini Donks making appearances.

When: 11th November to 20th December 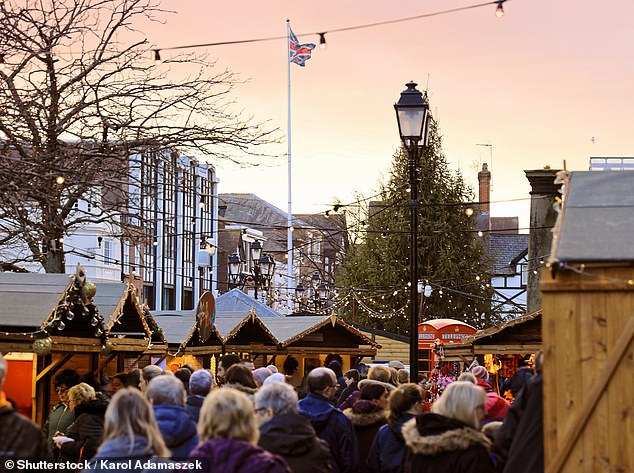 Surrounding the magnificent tree you will find over 70 stalls selling everything from handmade gifts and arts and crafts to cute stocking fillers.

There is also a hog roast for when you are done with shopping, which can be washed down with a steaming cup of mulled wine.

When: 18th November to 21st December 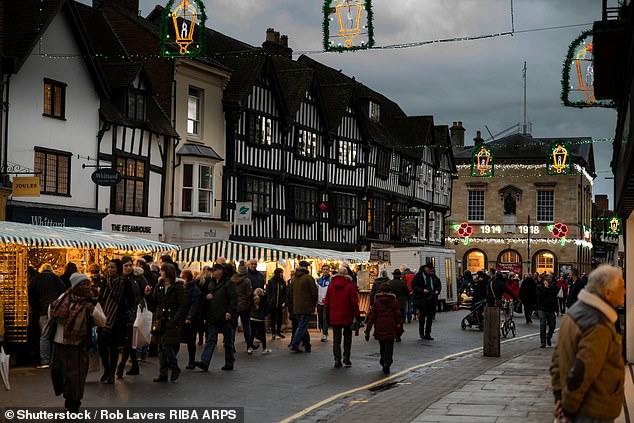 Situated in the birthplace of Shakespeare, Stratford-upon-Avon’s award-winning Victorian Christmas Market is a themed event with plenty of traditional cheer

Situated in the birthplace of Shakespeare, Stratford-upon-Avon’s award-winning Victorian Christmas Market is a themed event with plenty of traditional cheer.

With over 300 stalls, and store holders dressed in Victorian costumes it is the most unique event around.

There will be entertainment throughout the town with a stage in Rother Street, plus a traditional funfair. 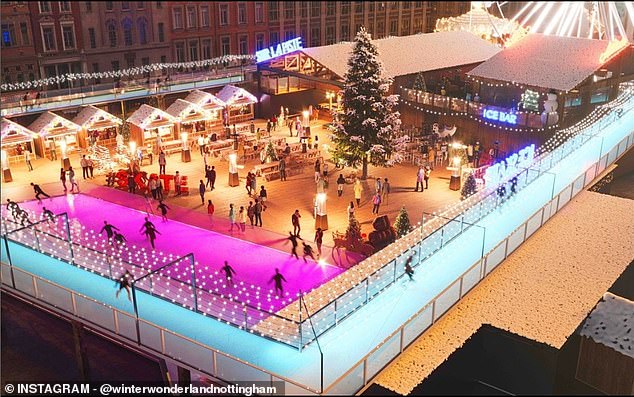 Nottingham’s Winter Wonderland is one for festive fun seekers and adults with its 200m ice rink situated above and around the Old Market Square.

Skating above the crowds you will spot the 60 stalls selling everything from hand-made gifts to tasty food and mulled wine; you can even stop off along the way at the 22 Skate-Through bar

There is also an ice rink at ground level and a fabulous choice of ski chalet inspired bars, which are perfect for after work drinks.

When: 15th November to 31st December

I'm a Boohoo superfan – here's the haul you need for Winter, the items will instantly make you look expensive | The Sun

Ralph Fiennes was ‘set up’ as a ‘decoy’ for J.Lo’s Ben Affleck romance
Recent Posts