NSW has reported 415 cases of COVID-19 and four deaths on Sunday, taking the state’s death toll from the pandemic past 100. 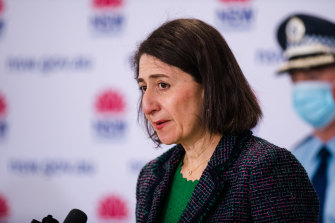 The number of cases linked to the outbreak which began on June 16 is now 7745 and the number of deaths in that time is 47. Since the pandemic began, 103 lives have been lost in the state.

Premier Gladys Berejiklian said among the new cases at least 35 were infectious in the community but the number would grow as investigations continued into 273 cases whose isolation status is unknown. There were 126,790 tests. There are 381 COVID-19 cases in hospital, with 62 people in intensive care, 24 of whom require ventilation.

“I cannot stress enough the seriousness of the current situation, and my grave concerns that these case numbers will continue to escalate. While we have put in additional controls, everybody needs to have a great sense of responsibility to follow the rules. Please stay at home and do not leave home unless for the most essential reasons.”

NSW will be prioritised as an additional 1 million Pfizer vaccine doses land in Australia tonight, the Prime Minister said.

As the entire state enters its first full day of lockdown, NSW Health released 25 new venues where people infected with COVID-19 have visited recently including supermarkets and chemists in Dubbo and the central coast.

These are of particular concern, as there are no known cases in these areas. Everyone in these areas is urged to monitor for the onset of symptoms, and if they appear, to immediately be tested and isolate until a negative result is received.

On Saturday, NSW reported 466 cases, the highest single day of the pandemic, and four deaths.

From Monday, all Greater Sydney residents will be restricted to their local government area or five kilometres from home for shopping, exercise and outdoor recreation. From Saturday, anyone leaving Greater Sydney will require a permit and people in the LGAs of concern must register their “singles bubble” partner with the government.

On the spot fines for breaking self-isolation rules, lying on a permit or lying to a contact tracer will increase to $5000, while anyone who breaches the two-person exercise or outdoor recreation rule will be fined $3000.

Victoria reported 25 new local coronavirus cases on Sunday, 13 of whom were in the community while infectious.

Western Australia Premier Mark McGowan, meantime, has blamed the delay in locking down NSW for the state’s current predicament and has little intention of reopening his state’s border before the end of the year.

“Clearly that was a mistake. They need to lock down properly and put in roadblocks around Sydney.” He also suggested the Commonwealth provide more defence forces to assist with compliance.

Sydney’s lockdown began on June 26, 10 days after the first local cases of the Delta variant of COVID-19 were reported.

Mr McGowan said NSW should be trying to return to COVID zero.

“Melbourne did it last year,” Mr McGowan said. “We did it a few months ago and Adelaide recently too. Victoria went through hell last year and the Andrews Government did what it took.”

Asked if Western Australia would retain its hard border as vaccination rates rose, Mr McGowan said: “We retain that right. I would prefer not to. But the best answer for the foreseeable future until the end of the year is we are going to have to have a strong border in place. We can’t run the risk of it infiltrating into WA again.”

Scorpio weekly horoscope: What your star sign has in store for August 15 – 21

Is your lolly a melter in the swelter? We test how long your fave treats last
Recent Posts