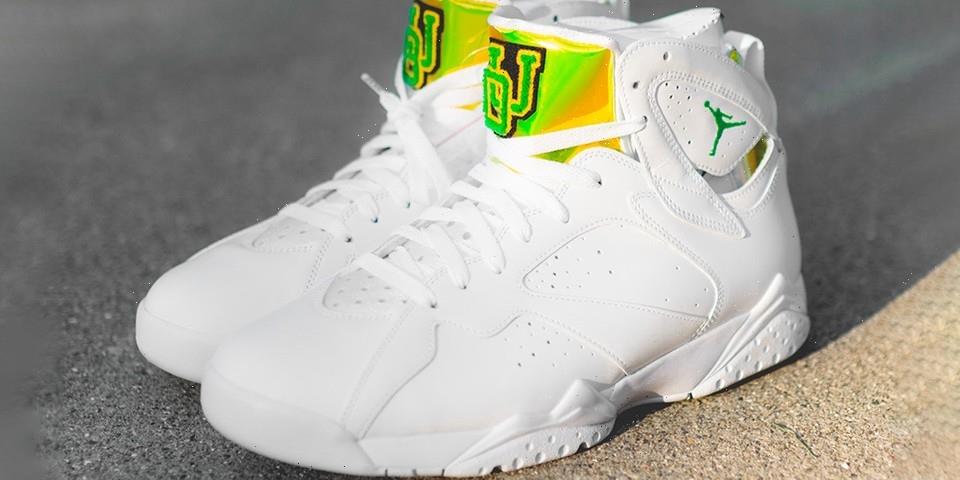 As the alma mater of Phil Knight and Tinker Hatfield, the former coaching home of Bill Bowerman and the launching point of several other Nike employees’ careers, the University of Oregon is undeniably a Swoosh-centric school. Its athletic programs get hooked up with a myriad of player edition Nike and Air Jordan sneakers as well, one of the latest of which is an Air Jordan 7 PE.

Produced for the Ducks’ men’s and women’s basketball teams plus friends of Jordan Brand, this collegiate-inspired Air Jordan 7 was limited to a scant 120 individually numbered pairs and debuted in March. It’s made mostly of crisp white leather, and its signature detail arrives on its tongue: a large, varsity jacket-style UO chenille patch in green, yellow and black, surrounded by a wealth of iridescent detailing.

There’s more glossy detail to be found behind the heel tab as well. Sporty green accents appear via the Jumpman logos on the collar and outsole plus Ducks hits on the lace tips. A final dash of yellow appears on the inner half of the tongue. Normally, the shoe’s numbered tag would be seen here — but in these photos it’s partially blurred out, likely to protect the identity of the player or Jordan Brand “family member” who gave up their pair. A debossed, tonal Oregon logo replaces the heel’s usual rubberized badge to round off the look.

As this U of O Air Jordan 7 is indeed a player edition sneaker, it will not see a retail release. However, you can check it out in detail above.

For more from the Jumpman, take a look at the latest team Jordan sneaker: the Jordan Point Lane.
Source: Read Full Article